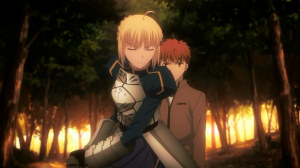 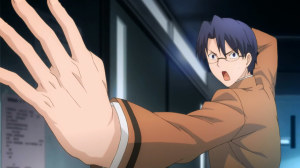 This episode definitely seemed more focus on setting up the next conflict and moving some plot threads forward. The hunt for Caster’s master lead to some pretty hilarious moments in this episode. It kind of makes you respect and wonder about Shirou in how far he was willing to go in order to find out the truth. He just went ahead and hunted down the information in a pretty straight forward manner that few others could do.

Just a lot of little things moving forward here that is letting us get a better feel for Shirou and the rest of the cast. Some good questions being asked about Shirou’s focus since he was a kid to become a hero. Also just a good reminder that while we have a wide knowledge about the motivations and backgrounds of certain characters that isn’t universally shared. We know perfectly well where that desire from Shirou comes from. We’ve seen that disaster he survived and then his desire to become that hero in place of Kiritsugu. But everyone else doesn’t have that kind of understanding since it’s not that easy for Shirou to speak about. 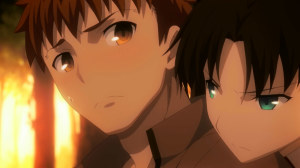 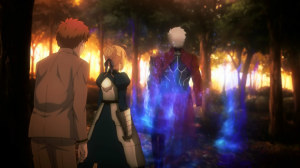 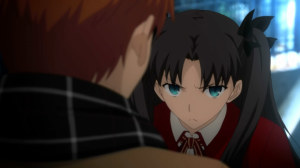 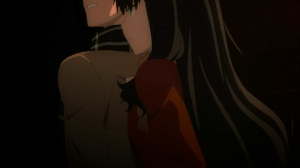 One funny bit in this episode was how aware of Rin and shaken up by her Shirou was getting in this episode. He might be fine with a situation where everyone may or may not be dead, but Rin getting right in his face is something else entirely XD. But really aware of it or not Rin was pretty aggressive throughout the episode. Not really hesitating to grab onto Shirou in public in order to talk with him or drag him into an ally to hide together. Just reflects Rin’s personality I guess. Gets focused on what she has to do and not so much thinking about how others might be reacting to her.

An interesting little chat as well about adoption with Shirou. Obviously he’s in a great position to talk about that. A pretty fair statement as well. If it’s a good place then you probably won’t have that much trouble with it, while if it sucks then obviously you’d have an issue there. Clearly Rin isn’t talking about herself there so it does lead to a reasonable speculation about the target. It’s not a stretch here to say she’s talking about Sakura. Sakura being adopted by the Matou family would certainly explain Rin giving her a surprising amount of attention. Something she doesn’t give a lot of people since up to this point she did act in a way to stay disconnected from them.

Anyways it was just a nice episode for Shirou and Rin to get a little closer. Something that has been happening gradually with them opening up about their abilities, families, and just teaming up. Won’t be easy to just go to being outright enemies after they deal with Caster’s master. Feel a bit bad for Sakura since spending time with Rin did keep him from actually visitng her. 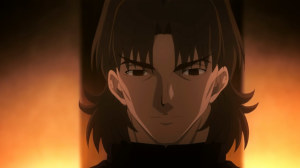 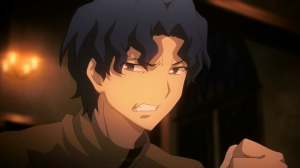 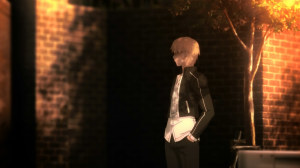 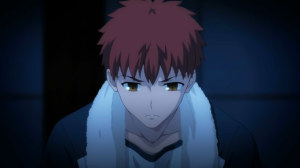 A lot of mystery going on right now. The mysterious blonde that was hanging out in front of Sakura’s house being a major thing. That guy just cannot be normal. But at this point all we have on him is that he’s screaming suspicious.

A bit more obvious on the suspicious side of things is Kirei. The way he pretty well manipulated Shinji into staying in the war was beautiful. Made sure to hit that slimey guy’s pride and thus make him unable to just walk away. Even though clearly his ineptitude was part of the reason for Rider’s failure. But still, Kirei just played this guy. Talking up how he’d never had anyone seek asylum from him and giving him an out by suggesting Rider was just too weak.

Although the bigger surprise is that this idiot is getting another servant. By the numbers it would likely be Lancer. We know Berserker, Archer, Saber, Caster, and Rider aren’t free. It’s possible with Assassin being a kind of fake servant summoned by Caster that another would still be available to be summoned but maybe not. And we haven’t seen Lancer since the first episode so he could very well be free. Although by that token then Berserker should still be an option since we haven’t seen him and Illya in a while. 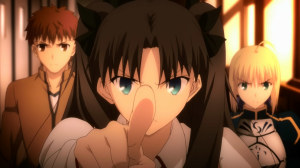 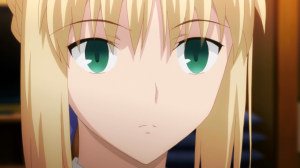 As things stand the mystery with Caster’s master continues and we’ll have to see how next week unfolds. I feel for Issei getting stripped by Shirou and I think even Rin covered the audiences reaction to that. Rin can be scary in her own way, but Shirou is kind of crazy with how direct he’ll be to get answers. I guess the only thing to do really is take the fight to Caster. Trying to figure out who it is out of everyone in school would be tough. I don’t think they can just strip search the entire campus. This was a good episode, just not action packed. It did give us insight into characters and reveals that Shinji will remain a pain in everyone’s side for a while longer.
Score: A-