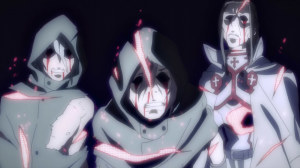 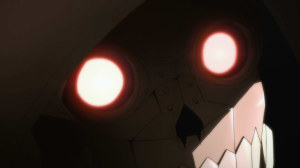 It is kind of amazing how long the focus has remained on this small desert cave XD. The big positive of the episode is that it ended with Kirito actually leaving it so we can expect things to actually get going next episode. This episode did help move the mystery forward. They figured out quite a bit about how this was being done. Although this time I felt the focus on Kirito’s harem + Klein was actually slowing things down.

At least Death Gun should be more than prepared for this upcoming fight. The guy has had more than enough time to recover from any injuries he sustained and can now go in to finish Kirito and then kill Sinon for additional fame and attention. This is certainly a good stage to go ahead and send a shock of terror throughout the gaming community. If Kirito hadn’t been sent in there who knows how many would have been killed before this ended. 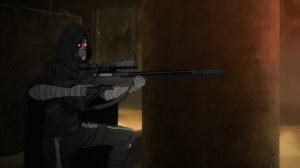 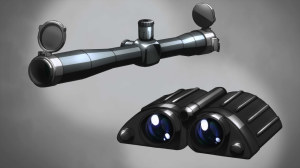 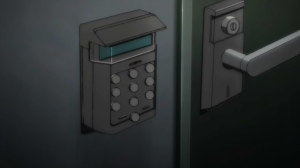 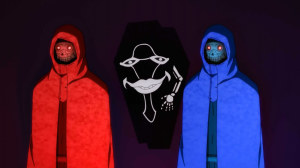 I did like how they figured out the mystery and what the truth actually was. It makes perfect sense really for this to be a group effort. Not sure if I considered that earlier, but it makes sense. Death Gun is a member of Laughing Coffin. Considering the seriousness of SAO I wouldn’t be surprised if they shared details so they could get back in contact afterwards. A bunch of murderers wouldn’t be the type of people who would simply be able to stop killing. They just had to work out a way for them to be able to.

Some like Death Gun must have preferred playing the games and killing people that way while some got a greater taste for killing in the real world. It’s a pretty good plan all things considered and helps explain their choice of targets. They wanted to send that terror through people, but they also needed a way to find their targets. Going after the most famous people would make it pretty easy to track them down. They just had to be sure to pick out individuals who lived alone and would be easy to gain access to. 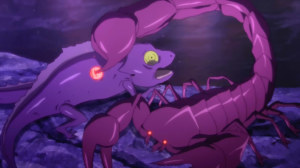 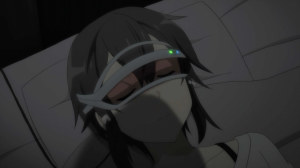 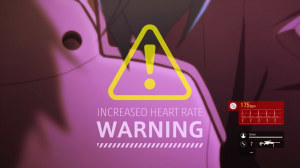 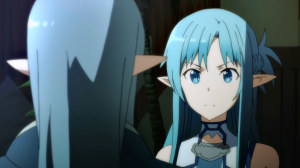 They did get some solid moments for Kirito and Sinon. While it was a bit uneasy seeing her freak out so much, it’s hard to blame her for that either. Things have gotten extremely real in a short amount of time. I’m not sure how anyone could avoid freaking out knowing that a murderer is in their place and they are helpless to do anything about it. The only reason Sinon is alive right now is because these killers have stupid rules restricting them. I can’t imagine how frightened she would be right now, that’s incredibly vulnerable position she is in there.

While I can understand Kirito’s harem getting all frustrated about the situation, this time it felt like a waste to actually cut to them. They didn’t discover anything that Kirito or we didn’t already know and getting angry at the guy who hired Kirito wasn’t actually helping things either. Even if they figure out who Death Gun is, by the time they can get to this guy the tournament is probably already over. Honestly, they are making a big fuss but actually can’t do anything but sit by and watch. If they want to be angry at anyone, be angry at Kirito. He knew all of this and went in on his own to try and deal with everything. Even if it was out of concern for the safety of the others, those others have a right to be concerned about him too. If he gets smacked around by Asuna and the others I have no issue. 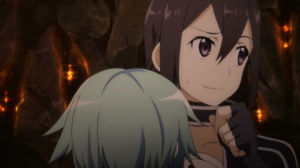 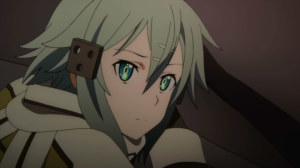 Maybe it is because of how serious things are, but it is kind of funny how close Kirito and Sinon are right now. Basically spending half the episode almost cuddling and then getting spotted by that video feed XD. I’m sure there will a cry from Klein as another girl has entered the Kirito harem. Kind of amazed it took Kirito as long as it did to notice the kind of position he and Sinon were in there. I guess reliving the past and dealing with their traumas took a lot out of them. Both having to accept that it won’t be easy to live with the fact that they’ve killed people. Although if you had to live with killing someone it would be the people they killed. Murderers and insane robbers, not exactly the sympathetic kind of people. 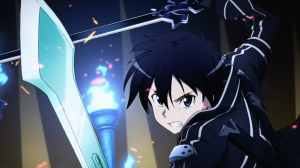 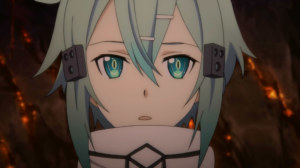 It wasn’t a bad episode really. I’m looking forward to the big fight and we did start solving the mystery. It’s nice to know exactly what the trick is behind Death Gun, but we still are left in the dark about who exactly is involved in this. There’s no guarantee it’s only a 2 person team. Especially since they killed Pale Rider already it’s probable that there is at least 3 people involved here. At least the plan is set up for Kirito and Sinon. Obviously it won’t work out according to Kirito’s plan since that’d be too easy. Probably get a good chance for Sinon to be put in danger and to rise above her issues. And I’m sure we’ll see Kirito getting knocked around if Asuna happens to see that video of Kirito and Sinon XD.
Score: A-