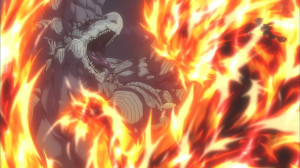 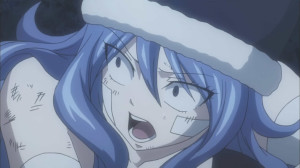 Wait a second… That didn’t just happen did it? I mean… I know I said last week that Fairy Tail needed to throw a curve ball or two to make things interesting again, but I didn’t expect something like this. Woah Fairy Tail! Just… Woah!

Death of characters is a big thing in shounen series, especially so in Fairy Tail, where even the villains end up surviving and attempting to atone for their misdeeds. The idea of death, life and atonement played a big part in this week’s episode, and I’d say that in some ways, this episode made a complete u-turn from the missteps of last week.

It’s actually quite frightening how much of a u-turn this episode makes, its a literal save at the last second. Whatever funk this arc had, it felt like both the series (and Mashima-sensei by extension) woke up out of a trance or daze. There was so much to this episode, that made it impressive. 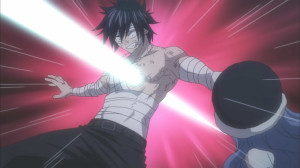 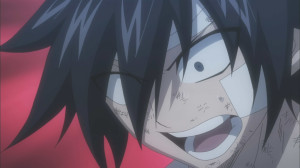 Lets start with perhaps the biggest moment of them all, Gray’s apparent death. I say apparent, because I’m still not sure if he’s truly dead. Not only is Gray a huge character for the series but he’s possibly one of the main characters after Natsu and Lucy. The rather creepy and quick way in which Gray ends up being shot through the chest and then the head was chilling, creepy, and above all very believable.

Death in real life tends to happen like that, suddenly and without warning. There’s no big speeches, no glorifying monologue or anything like that. Death is quick, unexpected and silently horrible. The death scene for Gray was just that. 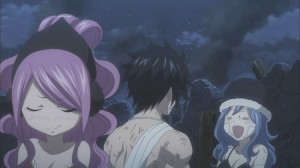 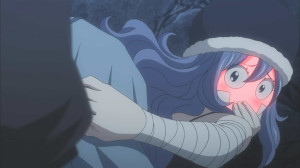 Its actually amidst another Gray x Juvia comedy moment at that. I found myself chuckling at first, alongside Meldy’s snide remark that Juvia was probably misunderstanding Gray again. Then my chuckles transformed to horror as one of those Mini-Dragons launched a blast at Juvia.

I totally expected Gray to swoop in and save her, and probably get pretty badly injured in the process. What I didn’t expect was him to get shot straight in the heart, followed by several other blasts penetrating his upper torso. And if there were any doubts about an impending death, another blast hit Gray straight through the head. I’m especially curious if the manga has the scene depicted in the same censored way as the anime did: 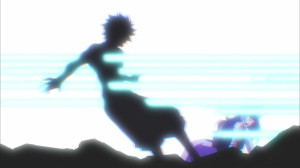 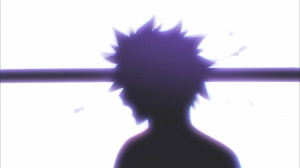 Its debatable whether this is a permanent death or not. My money is actually on it being temporary, as Fairy Tail has rarely, if ever, really killed off a primary character. Regardless of what the case (and please under NO circumstances should anyone spoil this for me), its definitely made quite the splash.

I’m actually surprised that wasn’t the moment the episode ended on, as it would’ve been a perfect cliffhanger, with Juvia and Lyon both screaming Gray’s name. Of course, there was the whole issue with Ultear to deal with. 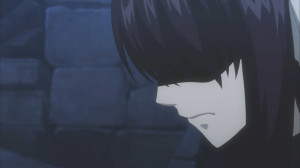 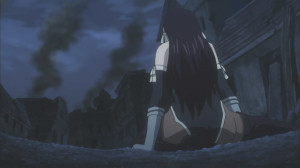 I confess, I’ve been a bit perplexed by Ultear’s sudden dilemma regarding Rogue in this arc. It very much felt like a divergence from the main issue at hand, rather than something the arc had been building up to. It felt that way… last week.

This week, Ultear and the Jellal and the whole evil redemption arc took the center stage. The series acted like a good salesman, and convinced me that this was something I wanted explored. In part, this was helped by the big confrontation between Milianna and Jellal. 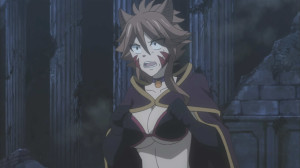 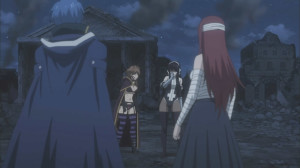 While I can’t argue that it wasn’t anticlimactic (Which it most certainly was), I can say that the scene made logical sense and stuck to Fairy Tail’s own ideologies quite well. Fairy Tail definitely has this fantasy of really saying that no one is really a villain from the core of their being, but rather its unfortunate circumstances that lead to unfortunate people making really bad choices. 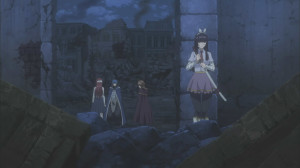 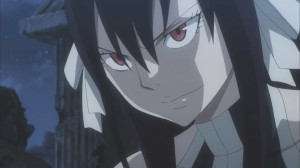 Jellal has been the poster child for this, and his whole character arc on redemption is a fascinating one. I’d say Ultear’s even more so, because she, unlike Jellal, was never taught right from wrong, and had a horrible childhood that birthed a true monster.

Whats more, Ultear is still struggling with those notions of right and wrong. Its not easy having a conscience or striving to do the right thing. This week’s moments very much put the idea of killing Rogue in a much grayer area than before. 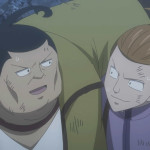 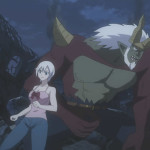 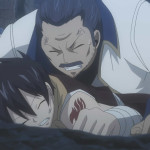 The way this episode ended up doing it was pretty clever too, as it simply raised the stakes. Throughout the episode, we saw each and every team that was fighting off the Dragons, start to falter and fail. The idea of killing Rogue becomes a lot more plausible and attractive when the good guys are not only actually losing, but dying as well.

The idea of Gray’s death, of Macao, Romeo and the rest starting to fall, those things bring real weight to the idea of whether Present Rogue should be killed to save everyone. It’s an interesting spin of the idea of whether the ends justify the means. The spin is playing with the audience’s own emotions. 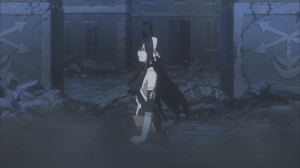 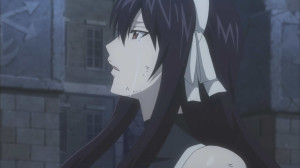 I’d rather see Ultear dirty her hands if it means that my favorite characters end up living. Its a rather sickening thought, and one that absolutely horrifies me. But its something that I feel, even if I know its wrong. This was the missing link in making me (at the very least) empathize with Ultear’s struggle.

Indeed, the only foreseeable way to reverse Gray’s death, and every other horrible thing that’s happened or happening, is to do a time re-write at this point. The role of this sort of Dues Ex Machina is falling on Ultear now, and the fact that such a terrible choice is being thrown on her is exceedingly painful to watch.

This is a stroke of genius, as the series not only made a truly interesting situation, but also told me something about myself as a person. Its in these rare moments that entertainment can truly achieve the status of art. Its ironic that only last week, I was stating that Fairy Tail was barely inciting any emotions or reactions from me at all XD 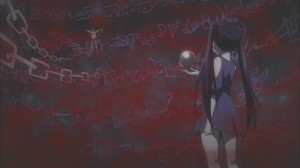 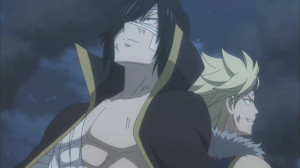 Its scary how much everything shifted this week. The only whiplash you do get from this episode, is the fact that it literally feels out of place with how subpar and sluggish the rest of this arc has been. The sudden shift in tone, the deaths, its all a little jarring.

I also can’t help but wonder why we didn’t get to this point several weeks ago. The large stretches of filler moments in between the big moments have definitely hurt this arc. The pacing is actually so key to making something flow and this very episode is evidence of that. This week every scene felt pretty important, and even the jumping around didn’t feel needless, since it showed us a state of despair across the entire battle field and added to the ongoing issue rather than detracting away from it. 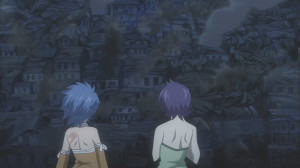 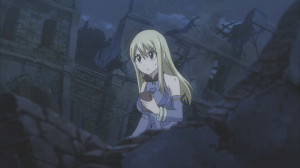 There’s a few questions still felt too. What is Ultear going to do? Especially since she’s decided to give up on living. What does Lucy know that she absolutely needs to tell everyone? Are the members of Fairy Tail all going to fall?

These are the sort of questions that should be not only burning in the viewer’s mind after an episode, but should feel like they’re about to be answered in the next episode. Which they very well feel like they are.

The feeling of unpredictability, of wonder, and of mixed emotions, is what makes for good entertainment. Its a welcome surprise and change of tone and pace. The most pertinent question though, is whether the arc is going to be able to ride this momentum or fall back into its less stellar habits again. I suppose we’ll find out next week. The one thing, though, is that I can honestly say that I can’t wait to see the answer. Next week can’t come soon enough.

Note: I apologize for the late review this week, and apologize in advance for next week’s late review. I’ll be heading to PAX this next week, and so the episode post will probably later than even this week’s. 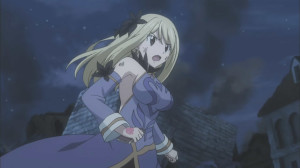 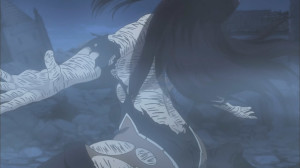 Seems like Ultear is going to be doing something really really big next week. Since the next post is for sure going to be late, I’ll see you guys as soon as humanely possible.