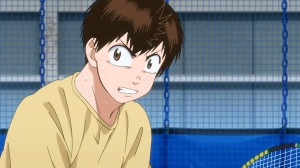 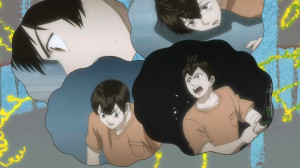 So finally Maruo gets a break from his insane training regimen and I’m fine with that. He’s getting to show off his growth and we can get a feeling for where his character is going to progress from here. Before he had incredible dedication and work ethic, but now he’s finally getting a body that is capable of keeping up with the talents around him. He doesn’t just have to be persistent, but can use his own skill to put pressure on his opponent. While he still has a long way to go to be at the same level as guys like Takuma or Nabae, he is making major strides to catching up.

This is the first step in Maruo’s improvement and it’s a necessary one. To get anywhere the body has to improve and get stronger. There’s no way he can catch up to the elites simply by focusing on tennis skills. No matter what he learns his body as it currently stood didn’t have the ability to efficiently carry out those plans. Now he can start expanding his strategy more. Just getting a stronger body allows for a major growth. Just have to see how far he can come in a year though since he’s on a pretty strict timeline. 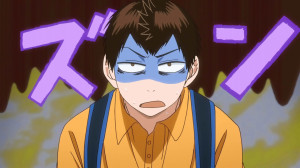 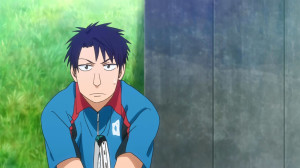 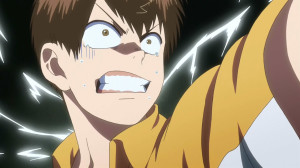 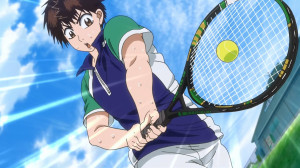 While I’m sure it’s not so simple, the way they went around building Maruo up by breaking him down made sense. Break him down and then help him get back into the swing of things through active rest. Of course the plan would have really been bungled if he was so exhausted he couldn’t beat the first opponent. But luckily he wasn’t all that good and the game lasted long enough for Maruo to recover and win. Not recovered to 100%, but enough to get by and eventually he went ahead to curb stomp the competition and win that thing. It’s a nice accomplishment really to win his first tournament, even if the big hitters weren’t there.

The bigger question will be how he matches up against the higher tier of opponents that he needs to defeat. Maruo has to reach a point where he can fairly comfortably topple guys like Miyagawa and Oobayashi. Just barely getting past them just won’t be good enough anymore. But he has a long way to go in terms of fully developing his body and then developing his tennis technique. There is time, but it has to be used as efficiently as possible. 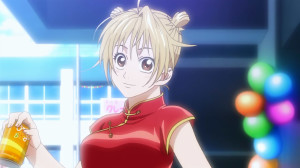 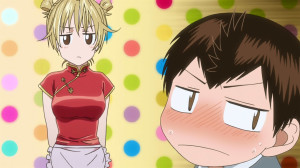 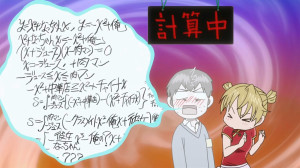 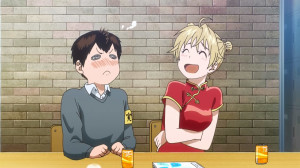 I will say this episode’s scenes with Ei-chan and Natsu were really enjoyable. It’s nice that in a series that is sports focused that they manage to get these moments spaced in there. It shows that while Maruo is dedicating himself to tennis that isn’t necessary to ignore all other things. These two look good together and it’s nice to watch how they interact. At this point the mutual feelings are definitely clear as day. While there might be threats to emerge on both sides at least they seem to have a good place to build from.

Maruo may have logic on his side, but that doesn’t mean much when it comes to Natsu in that outfit XD. It definitely looked good on her and that wasn’t lost on Maruo here. Probably a good call by her class to use her to get customers. While his interest is obvious it’s still pretty strong from her side as well. If she wasn’t at all interested the whole ‘boyfriend’ talk wouldn’t have had her as red as it did.

Not surprised she didn’t go into details on how she answered. That’d pretty well be asking how she felt about him. If he’s already thinking along those lines he probably should be the one to get his feelings out. They really did turn the cute on for Natsu in that moment though and it was also fun seeing Maruo’s brain overheat XD. Just a fun little scene all around. 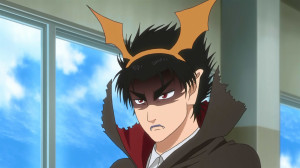 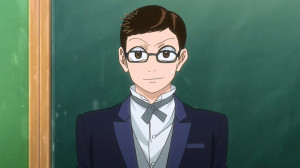 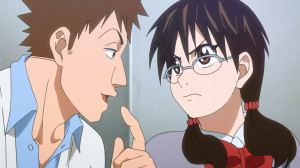 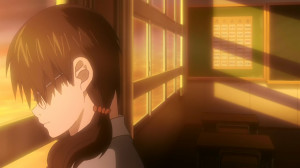 This probably had the most additional content of any episode we’ve seen in a while. Mostly since the Cultural Festival was actually a mini-chapter added later in the manga. So here they were able to integrate it accurately in the timeline of the anime and expand on it a little.

Not a huge difference though. They added more scenes of Maruo helping out and had more scenes with that guy from the school’s tennis club. Originally it was mostly just Maruo apologizing to Sasaki for leaving everything to her and then straight to the Natsu scene.

Another addition was mostly giving more substance to Sasaki’s scenes especially at the end there. I think it’s probably good to show how she has to accept the difficult spot she’s in there. While she certainly likes him he’s a lot closer right now to Natsu and the further he goes in tennis the closer he’s likely to get. While I think Kageyama should probably give her a bit more space, it’s probably good that there is someone who understands that she’s hurting from this and will stand by her. 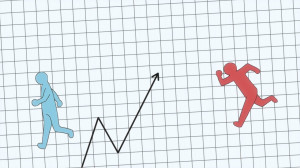 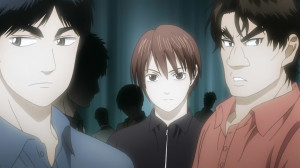 This was a pretty good relaxing episode. It was a nice chance to develop the connection with Maruo and Natsu. We got a preview of what Maruo is capable of when he is completely committed to tennis and that’s a fun thing to see. We also got the message that Nabae should be the ideal boss for Maruo to eventually go up against. Anyone that can beat Takuma is definitely a good wall to have to overcome, especially since he seems to be a similar type to Maruo himself.
Score: A