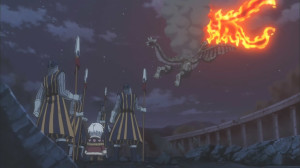 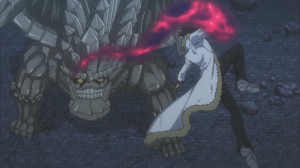 I wish I could say that the thematic message of this week’s episode was something extraordinary, insightful or even just plain old interesting. The sad fact is, however, that Fairy Tail’s latest episode tackled the age old idea of “heroes don’t get to cross lines” and that the ends don’t justify the means and all that. Its not a bad idea to add some morally gray stuff and if nothing else, give the characters something to struggle with. 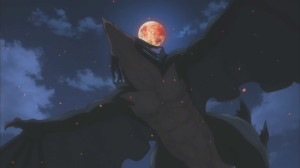 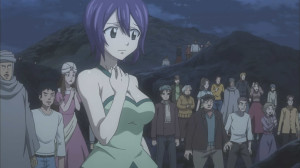 The issue is that at this point, we’re waay past the point of going on tangents. The setup is ready for Natsu to take down Future Rogue, and everything else, whether its supposed to or not, feels like its just delaying the inevitable outcome.

You know its a sad day when I have to say that Fairy Tail’s current arc, and this episode as whole, just didn’t hold my interest. I felt like a passive watcher, just kind of observing the events unfold without really having any kind of emotional connection or attachment whatsoever. Its sad, because Fairy Tail is able to keep your interest 95% of the time in any given episode.

This was the first episode where there was really nothing all too interesting, except that everything inched ever forward to the final resolution albeit at a very slow pace. They say with art, its a scary place to be when you’re just mediocre. If you reach the point where you fail to incite any kind of emotional reaction from the viewer (good or bad) then I think that’s worse than being painfully bad. 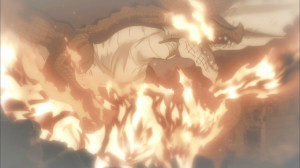 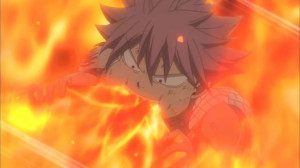 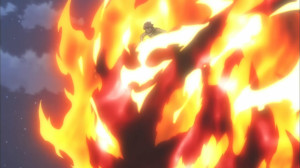 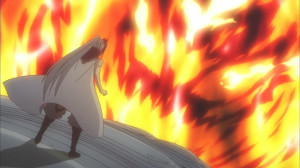 And despite what amounts to a fairly average episode, I still could appreciate what was going on, on an intellectual level anyway. The little moments were there. First we had Natsu reconnecting with his Dragon dad’s old friend, which wasn’t bad. I would’ve liked to see more focus on this particular connection. Igneel’s been quite the presence in this series, even though we’ve only seen him a grand total of once in the present, and a few times in flashbacks. Unfortunately, all that was established was that Atlas Flame knew of Igneel, and that Igneel’s the King of Fire Dragons.

Instead, the series repeated its whole switching to multiple different locations and highlighting as many things in one episode as humanly possible. Again, I can appreciate the idea of showing Rufus getting saved by Gray, or Orga getting some much needed backup from Jura. 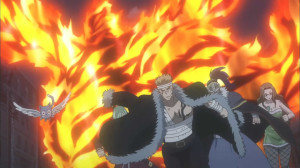 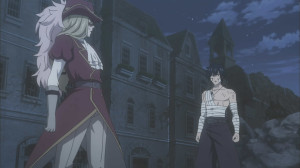 Laaxus and Raijunshuu working together wasn’t bad to see either. Even seeing those members of Fairy Tail that were left behind kicking some Dragonoid (what are those Dragon soldier things anyway?) butt was pretty nice…. In theory.

If there’s one thing I feel that serves as the proverbial Achille’s Heel for this specific arc and the show in general since its return, its been this unfocused jumping around. I think the secret to Fairy Tail’s earlier mastery of pacing, was in the fact that it focused on one or two events per episode, and did them REALLY well.

We’d get a resolution to a battle or two, for someone, in half an episode, and then maybe decent progress in the second half, with the inevitable cliffhanger to close up the episode. That’s what’s sorely missing from this episode. 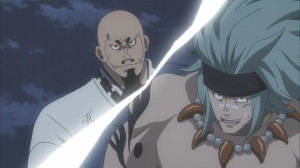 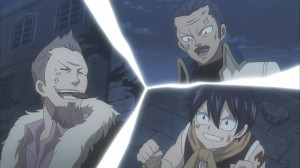 I’m game for seeing Jura and Orga, and all the other characters kickass, but not in this way. Devote an episode to Jura, Orga, Gray and Rufus taking down some major villain. Give these characters their due rather than just using them and what they’re doing as glorified B-Roll. I’m totally fine with not seeing Natsu for an entire episode if that means we can just sit down, focus on one area, and get some traction there.

There’s some especially powerful stuff hidden in this arc, that if focused on, could really make for some great storytelling. I’m exceedingly curious about what Lucy is reading in that journal. Yet, we see her and Virgo for a few seconds at best, and there’s really nothing gained from that scene except that Lucy is so involved, that she’s ignoring Virgo. 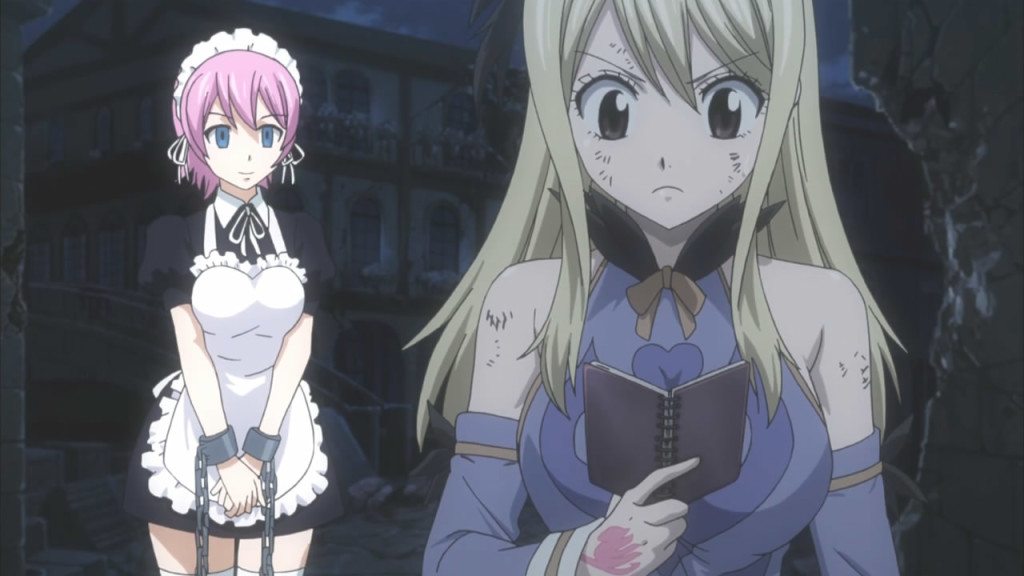 And the main crux of this episode, takes places in the 5 minutes or so (as seems to be the pattern these days), and as I mentioned at the start, its all about an idea that’s been explored before by various other forms of entertainment. Ultear puts together the idea that if Future Rogue is from the “future”, then killing his present self will make everything right.

Not the most original idea, but if you’re looking at time linearly, then yes, it could be a plan of action. Of course, it makes total sense that Natsu would be against this idea, given that well… A) He’s the hero character and B) it’ll make for a pretty unremarkable end to this whole story. Natsu can’t punish Rogue for crimes he will commit in the future, that’s not how “right” and justice work afterall. 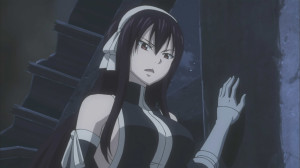 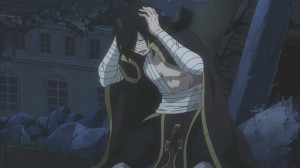 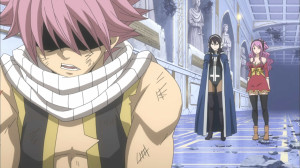 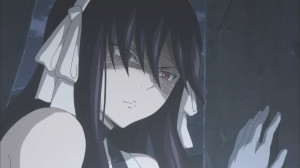 Now… Given that Ultear recently joined the side of the good guys, she’s obviously a bit hazey on the whole “being the good one”. She’s willing to cross lines that Natsu isn’t… or is she? That’s what this week ends on. I’m not sure where this plot thread is going to go. What I do know is that if Mashima-sensei has Ultear killing Rogue and fixing everything, then it will be a HUGE cop out, even bigger than Sting’s recent loss in the Grand Magic Games Final.

At this point, Fairy Tail needs to either throw some interesting curve ball our way, or just end this arc already. Its getting to the point where its just getting boring, and that’s not something I thought I’d say in the same sentence as the nouns “Fairy” and “Tail”. 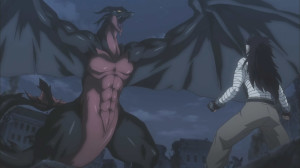 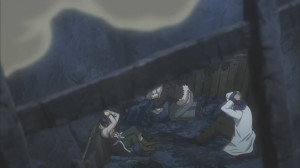 Seems like a good chunk of next week’s episode will be more of the side characters and side conflict. Of course, given its called Sin and Sacrifice, I’m sure there’s some kind of big moment coming as well. See you all next week!