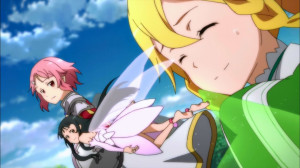 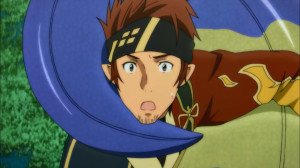 There’s not much you can say aside from it being a slow episode. It was necessary to get some breathing room after last week. Kirito needed time to get his head on straight and it was a good chance to catch up with everyone else. Just that there wasn’t a ton that actually happened in this episode and we were left waiting for all the real action to get started next week.

Will kind of admit I enjoyed the episode most with the Klein party getting some fighting in. I do feel for Klein in a sense. He’s struggling to get some points with the Kirito harem, but it’s just not that easy. Also kind of funny that one person who probably should be in support of him busting up that harem a bit was kind of leaving him hanging. I get Asuna being worried, but maybe shouldn’t be there at all in that case. Also kind of odd to see the big speed attacker from SAO being reduced to a party healer. 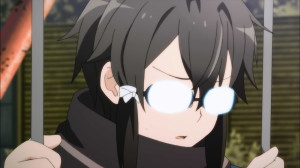 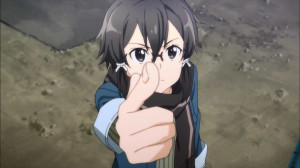 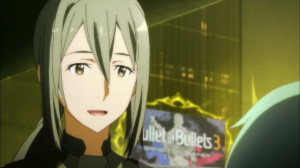 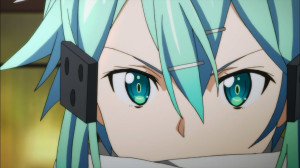 I suppose in this kind of situation Shinkawa was misreading Shino’s personality a bit. Certainly the aspects of her that he likes are aspects of who she is be it in GGO or otherwise. But it’s not like the person that she is right now is the person she wants to be. The whole point of going into GGO for her was to work towards changing. Certainly he seems fine with her changing towards the kind of person Sinon is in GGO, but that shouldn’t mean there aren’t other ways she can change or other behaviors she can have.

I certainly can get the worry about Shino falling in with the other girls of the series into the Kirito harem. Certainly if he likes this girl having her show that much interest in another guy would be worrying. Even if it’s at the level of just partial frustration, you never know how things can go. But rushing the hug on her all of a sudden was a bit much. And it’s not like she outright shot him or anything. It’s just that she has things she wants to get past before she can even think about diving into a romantic relationship.

And then he pretty well shoots himself in the foot by pushing it again. Makes it seem like he’s more in love with the in-game avatar for Shino than the girl herself when that’s where he actually makes his confession. If you want to listen to the words about waiting (for a reply) then actually wait! Guy is losing any sympathy I have for him, which wasn’t much since he seemed like a big whiner about the current state of GGO in general. I don’t want Sinon in Kirito’s harem either, but let’s leave some options here. 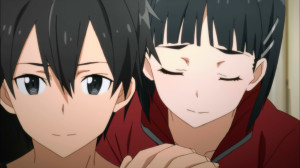 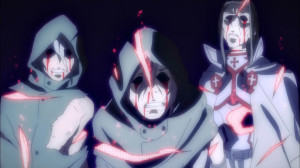 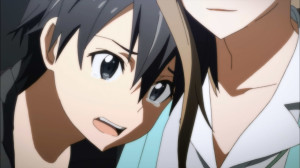 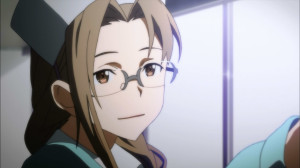 The other scene that did have some nice impact was the scene with the nurse. While it was fun watching Suguha poke holes in Kirito’s excuses and get a promised new practice sword, that nurse scene had some good weight to it. Of course she can’t fully understand the situation of SAO because she just wasn’t there. But being in a position where you save lives and lose them at least she could give him some sense of comfort there. Certainly forgetting people who’s deaths you caused isn’t good, the fact that he does have so much pain and guilt coming from it means a lot. Forgetting is one thing, but not caring even when you do remember is another.

While it doesn’t change the reality of the deaths, I do think a fair point is made on what he was fighting for. Especially with the Asuna situation there was definitely a need to take the life at that point. Even if anger was part of it, that guy wasn’t going to stop until Kirito brought him down. Considering the people taken down because they wouldn’t finish off some of these guys, what Kirito did saved quite a few others from being killed by their own hesitation. It was just that kind of situation. But it was still a good chance for Kirito to honestly vent after putting up a front for everyone else in his life. Breaking that cool demeanor would lose him harem points I guess XD.

It was just nice to get a bit of vulnerability out of Kirito. A reminder that there is more to this guy than the smirking guy we see at the end of the episode. The only real issue I had was him still keeping Asuna in the dark and deciding that she needs to keep herself safe and out of this situation. 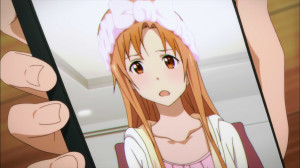 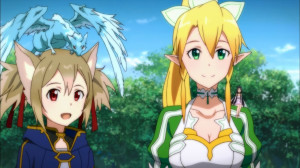 And now the main tournament finally begins. Here’s hoping they can turn this into a really entertaining series of battles. Hopefully Sinon can tackle her own personal issues and Kirito will be left to handle Death Gun. I suppose ideally Kirito takes care of that situation before the finals which ends up Sinon vs Kirito again. just this time it being a legitimate fight where Sinon wins. But anything can certainly happen. Again, not the most exciting episode but a few good moments in there.
Score: B