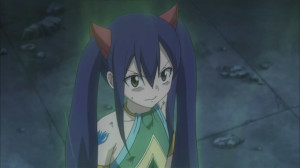 Even at its best, Fairy Tail has never been a perfect show. There are certain flaws in every piece of work, ones that give said work a unique sense of character. Unfortunately, when all the flaws come out in one episode every so often, it can only make you shake your head and sigh. Yeah, this week’s Fairy Tail was definitely chalk full of the things that the series doesn’t do well.

Its been a few episodes now, where I’ve complained about how the story seems to have been slowed down to a crawl. This week is hardly an exception. While I wouldn’t say nothing happens this week, as some stuff does, its just all so irrelevant and downright stupid that… In the grand scheme of things it doesn’t matter much at all. 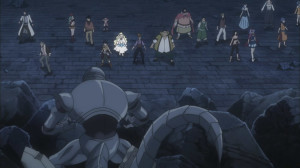 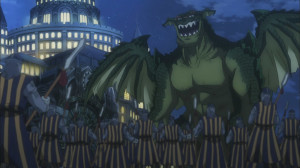 One thing that is truly heartbreaking, is seeing Fairy Tail completely suck at comedy like it did this week. Fairy Tail’s humor hasn’t been top notch, but its been something that would at least make you chuckle. This week all the jokes just kind of fell flat, and I couldn’t help but repeatedly roll my eyes.

For one thing, Lucy got back into her role as the series whipping girl. Man, the amount of abuse this character gets, and the amount of times she’ll lose her clothing is insane. This week, I just kind of didn’t feel anything. It felt like business as usual, a gag that’s been used so many times its lost any of its charm, and just comes out as being sleezy and just crass. 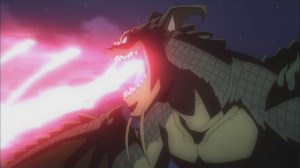 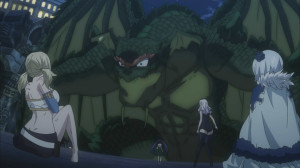 I did get a chuckle out of the fact that Zirconis used his power to strip all the MEN first, but once he shifted to Lucy, it became nothing more than another “oh… this again.” moment.

And before I continue to harp on the bad, its worth noting that it wasn’t all bad (or I’d have rated this episode significantly lower). There were some nice moments in this episode, just kind of buried underneath all the failed comedy. Wendy standing up to and taking on Zarconis, for example, was brilliant! 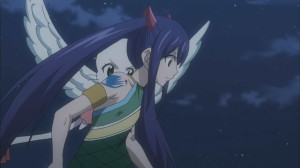 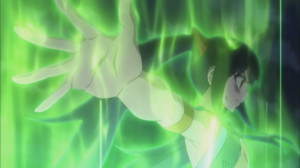 I had been wondering since last week about whether Wendy could handle a Dragon on her own, and this week she definitely rose to the occasion. And of course, this week all the other Dragon Slayers took on their specific Dragons as well. 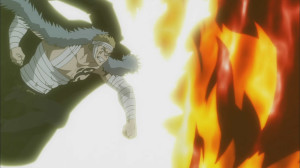 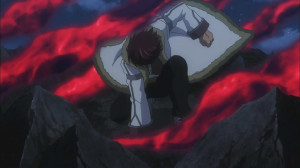 Laxus particularly, made an exceedingly badass entrance, and Sting and Cobra weren’t too bad either. Hell, even Jellal’s appearance in the nick of time for Erza was pretty darn awesome. Yet, for every cool moment, we had a bunch of stinkers that just brought everything down.

The whole thing with Ichiya and the rest of Blue Pegasus was just bad. Whether it was Jenny using her bikini mode as a distraction, or the stupidity of Ichiya’s Armpit Parfum… 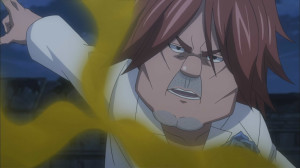 It was all just… lame. These jokes went past juvenile and went straight towards just bad and childish.

Of course, the absurdity just hit the max when we had Lucy thrown off, naked towards Natsu, knocking him off and sending them both flying into a large Bell. The Bell proceeded to bounce around town, with a naked Lucy, and a motion sick Natsu. 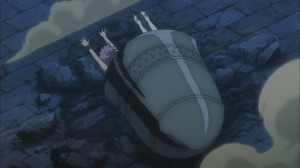 I’m still not sure about how I’m supposed to react to the whole affair. Plot wise, it kind of makes some sense. It gives Natsu a chance to take a breather and regroup… but… Really? Really Fairy Tail?

Even a decent dose of Natsu x Lucy stuff that followed just couldn’t make up it up to me. I’m usually ecstatic when any hint of the pairing comes up on screen, but all the stupidity prior just ruined it. 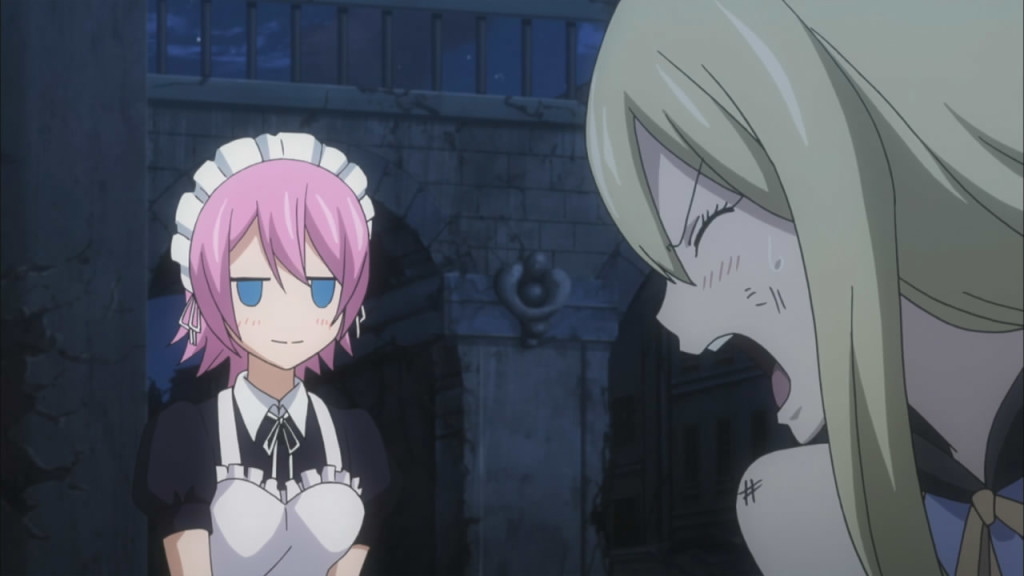 The one bit of comedy that did was Virgo teasing Lucy about Natsu and how she “frolicked around” naked with him. That got a legit chuckle or two out of me, but that’s a success rate of 1%. 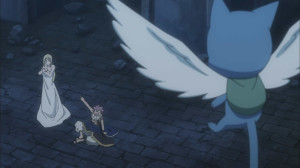 I will say, Natsu and Lucy were acting like a married couple more than anything. The lack of reaction from Natsu regarding Lucy’s attire just screamed “we’ve been married for a few years now”. And Happy coming in and acting like it was business as usual just brought home the idea. 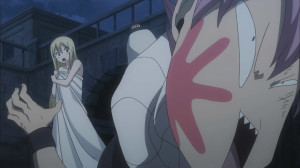 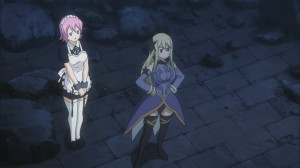 At least Lucy threw in a slap or two, since she was probably the only one acting slightly normal in the whole state of affairs. Maaan… What a new low we got to this week though.

Leaving all the absurdity aside. Two things did happen that nudged the story along. One was of course, Jellal and Erza meeting Milianna. 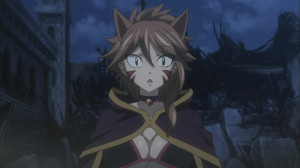 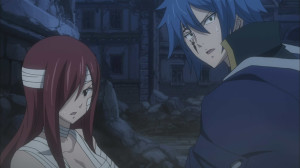 This whole confrontation is going to be big for Jellal, and a huge reminder of what he was before his whole redemption career of the present.

The other thing, was Lucy finding the journal/diary of Future Lucy. THIS! This gave me goose bumps, even if it did happen at the end of the episode. I’m very curious to learn about what happened in the alternate future where everyone but Lucy dies. 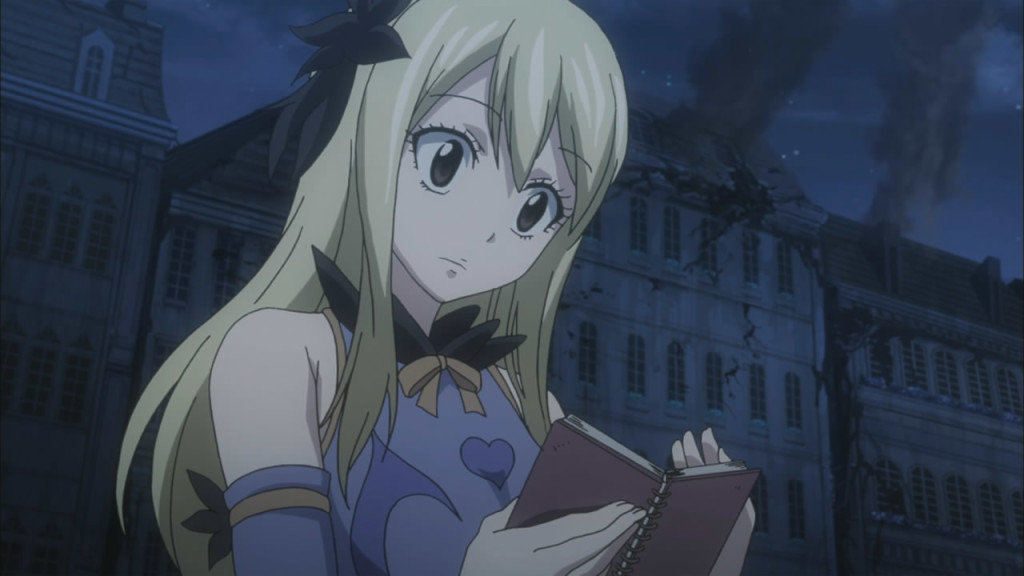 If this diary leads to a flashback/flashforward of said alternate future, then that will be a welcome divergence from what’s going on in the present.

The last thing that I’ll say is that its been interesting reading the comments from manga readers these past few weeks. There’s a remarkably different impression of events and the extra added scenes for said manga readers in contrast to mine. I’m especially curious about some things regarding this episode.

Was all the humor that we saw this week in the manga (doubtful)? And if it wasn’t, well then what did people think of these additions?

Regardless of all that there was to dislike, I’ll say that there’s still quite a bit of mileage to this arc, and some interesting things to see. I’m extremely anxious and more than a bit curious about when the series will stop playing around and focus on rolling through the last bits of this arc’s story though. 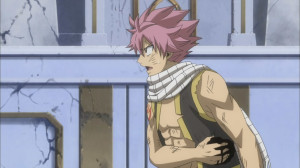 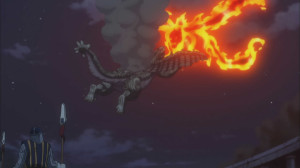 Seems like we’ll get some flashbacks next week, as well as a rematch between Natsu and Rogue, each with their own Dragon. Here’s to seeing something nice next week!