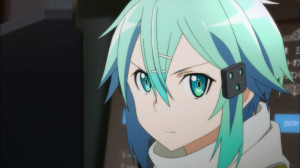 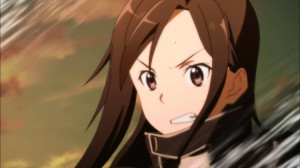 If there was an episode that said “SAO is back” it was this one. This was very much a familiar kind of episode with Kirito just getting a chance to cut loose and really take part in this GGO world. Also him managing to anger girls since he’s also surprisingly good at that. Good for him that this is a virtual world so getting slapped around has little effect except for some comedy value.

So far from this episode it seems like Kirito will do alright in these battles. His sword does seem capable of stopping those shots if he can time it properly. A little anticipation and those lines should make that possible. May be hard though depending on the firing type and skill level of his opposition. Also all his ‘sharpening of his senses’ may not help him much in a fight against Sinon. If he can’t pin down her location instantly she can go as far as she needs to in order to get set up and snipe. Sniping may only get 1 free stealth shot, but in this kind of game that’s enough. 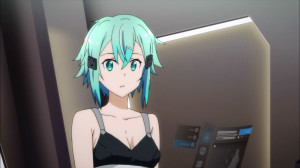 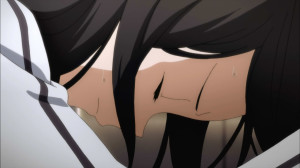 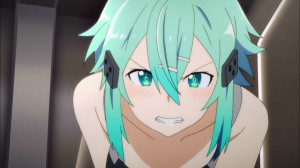 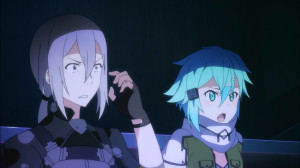 And yeah it’s not SAO if Kirito isn’t having girl trouble. I’m not sure that Asuna would appreciate finding out him being in a change room with a girl or teasing her by insinuating they were involved in front of her friend. If he didn’t deserve that slap before he got it, he deserved it after.

I’ll give him props for at least coming clean once he realized things had reached a point that he really needed to. I could feel for Sinon since it was a shocking revelation and in that state you really don’t have time to rationally appreciate the fact that he came clean at all. Since for that girl this version of her feels like a different person so that embarrassment holds true.

I didn’t mind a bit of teasing towards Sinon, I’m just not sure it was appropriate. The fact that she did go cold as expected was too bad, but it was also funny watching him chase her around trying to get information about the competition. I do think it’d be interesting to see her actually beat Kirito one time in this game. Either in the finals for that block or in the main tournament itself. It’d be interesting for her character and interesting for Kirito’s development to face some defeat in this game. 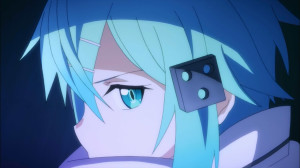 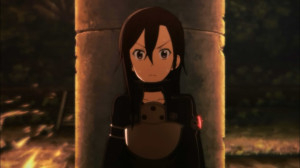 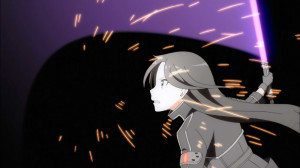 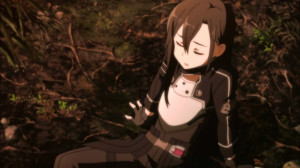 Of course not surprising that Kirito suspected that Sinon could be Death Gun. I mean that kind of phrasing of “I’ll kill all the strong ones” and intensity was unsettling. Of course I’m glad he didn’t 100% jump on that. Kirito should know as well as anyone that people all have their own issues. Everyone has been through different things and react to those things in their own way. As we know Sinon has very good reasons for being so intense and wanting to topple the strong characters in this game. It’s a probably flawed goal, but it’s still one that makes sense to her.

The fight itself was pretty good with Kirito getting a feel for this game. The whole light saber showdown was hilarious and I pray there is someone else using one in this. We really need Kirito to eventually get double light sabers and go against someone using a red one XD. At least Kirito had to work for this win. His aim is still weak and can only work well once he gets to a moderate range where missing is practically impossible. The sword isn’t that overpowered in terms of damage since most of these weapons can take a guy down in one shot if they hit a vulnerable point. Kirito mostly just took glancing blows or hit to his limbs. The only downside to the episode was that the battle song didn’t feel nearly as awesome as SAO’s first season. Hopefully that’s not the big song they use for the fights going forward.

One thing that stood out for me was the whole putting in personal data when entering. Anyone aiming for the high prizes of course would put in their data. You can tell Kirito really wanted to get those prizes XD. I do wonder if this ties into Death Gun somehow. May be easier to target people if you know who they actually are. It may be nothing, but may be something. 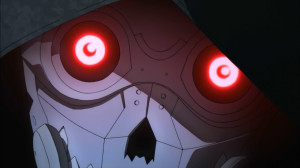 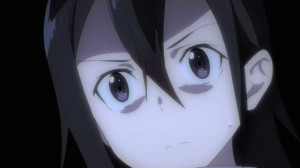 The little showdown with Kirito and Death Gun was intense though. Ironic that it happened with Sinon’s friend there so I’m curious if he is the guy or not. Possible he shared his account with an accomplice, but no evidence one of those exists. As to Death Gun himself, the fact that he is an SAO survivor was a surprise. Not just a survivor though, but a Laughing Coffin member. One of the evil psychos that went around murdering people in SAO because they could, it was fun and there was no consequence. All that the players could do was either kill them in return or lock them away. And sadly with clearing the game that sentence was barely any time at all.

Of course Kirito would stand out to anyone in that guild or SAO. He did have that big duel against Heathcliff/Kayaba and was a prominent front-liner. He may certainly have run into this guy in person as well since he did have run ins with them. If Kirito wanted Death Gun’s attention…he got it. I’m just curious to see how Kirito deals with this person. One of those who pretty well got away with murder thanks to Kayaba and now has appeared before him. 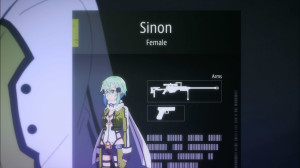 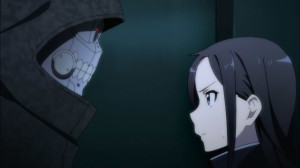 Definitely an entertaining episode if only for the cliffhanger. That was an intense scene and you could feel the shock from Kirito. He really thought Death Gun wasn’t a serious threat, but I can’t imagine he’ll feel the same after this. We’re talking about someone who did actually kill people in SAO. It’s possible that kind of person dedicated their time to continuing to kill since serial killers do find it hard to stop once they get started. Next episode can’t come soon enough.
Score: A