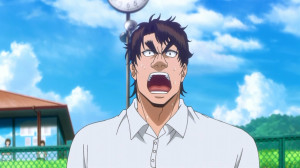 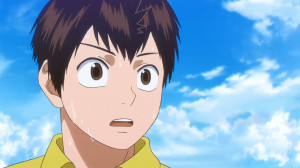 And this match ends in a pretty fitting manner considering how the tournament had gone for Maruo has a whole. So many wins came from pushing his opponents to make mistakes or from a lucky break. Kind of ironic that in the end his tournament ends just from a lucky bounce from the net. Not that Araya didn’t play a great game, but it’s ironic how it all worked out in the end. You really do just have to appreciate what you get since luck is something that can swing against you in a hurry.

This whole tournament though was a good test for Maruo and showed how incredibly far he’s come in a year. Sure, a lot of his wins had some luck involved and that’s not always going to happen, but he still made it to the top 4. It shows that he does have some talent for this game and the potential to go further if he decides to choose it. And now all the numerous references to guys going pro or not going pro have finally come to Maruo. Where does he want to go? Does he just want to play tennis for fun or does he want to commit himself to chasing the dream of going professional? 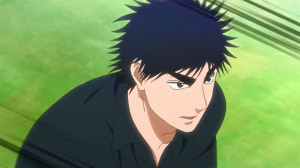 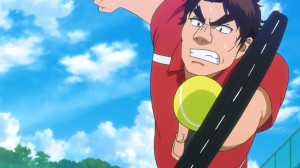 We could see from the finals the abilities of two guys who do want to go pro and have the ability. Takuma vs Araya wasn’t long, but it still showed that they both have quite a bit of skill. I guess the point is that Maruo is the lead and the only long matches we’re going to get are his. Which I can get since they aren’t making this a long running series. The match itself was still able to do what it needed which was show Takuma’s progression thanks to having Maruo around. He’s now back and ready to chase his goals even if it means running into some incredible players along the way. Something he’ll probably have to get used to since let’s face it, the world has some great players in it.

While Araya grew from that match against Maruo that wasn’t enough to win. It was enough though to help him take steps forward and really put the pressure on Takuma who wasn’t exactly holding back there. Araya turned out to be a pretty good guy. Sure, he’s still a bit intense, but at the same time he respected Maruo as an opponent by the end of the match. He still had an overwhelming advantage all things considered, but it could have turned into a much longer match if he hadn’t gotten that lucky bounce. 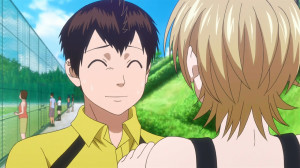 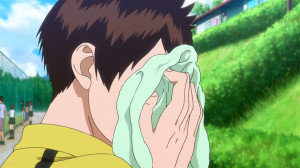 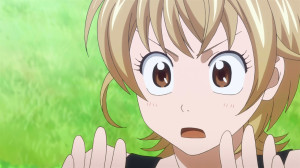 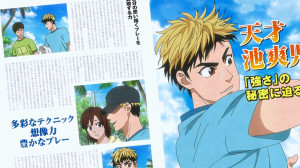 The aftermath of the match was pretty solid. You could feel the difficulty that Ei-chan was having keeping it together. You can’t get that invested in something and not feel that defeat. He rationally accepted the loss, almost better than he accepted his wins. Of course Natsu was left a bit at a loss for words when he finally did break down there, but did manage to help him pull it together. Really it just showed how much passion he had. He was just that invested that it was something that hit him hard when he finally fell short. My condolences to the other girl, she’s trying but going to be hard to catch up there XD.

Of course the surprise appearance of Ike really threw Maruo off. Quite the guy really. Becoming that good while being at the same age as Ei-chan and on top of it all he’s Natsu’s childhood friend. Just all sorts of areas where he has an advantage XD. Definitely the type of person that’s not easy to handle since he just acts and drags you along at his pace. Definitely will be fun to actually see him in action. Biggest surprise for me was that hair…I didn’t really think it was a mix of blonde and black.

As things stand Maruo doesn’t have the points to go to the next big competition like the guy’s been looking up to. And he really threw the curve-ball question to his parents at the end there. At this point he’s still uncertain about his direction, but I can get him trying to feel things out and consider all his options. It’s a big decision to go for it and also to back off. 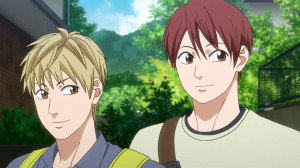 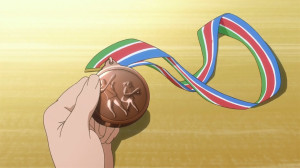 Next week should be entertaining for a lot of reasons. Honestly, I really did enjoy this episode. It was a tough loss for our main character, but he gained so much through this tournament. I also think that if he’d gone any further it really would have pushed the believability. A guy can only get so lucky for so long. This Cinderella run was bound to be halted by pure still at some point. There is a lot of potential with Maruo, the question is where he goes next. Another key thing is where the story goes from here in the adaptation. We are steadily running out of episodes and I’m just curious if they’ll stay loyal right to the end and leave it open for future seasons.
Score: A