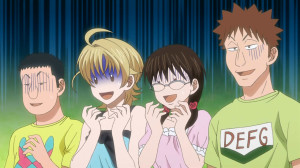 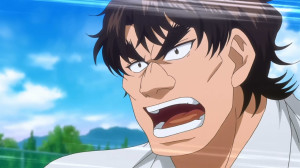 This match isn’t over yet and it’ll be interesting to see how the next point goes. While it’s not a game ending point either way, it’s one that will create all sorts of pressure. If Ei-chan can get that next point breaking is very much a possibility. While on the other hand if it goes Araya’s way then it could pretty well be game over. Just shows the level of Araya that this has turned into a struggle for survival. Throwing everything will just create the chance to keep the match going and maybe turn things around. Could be a tough match stamina wise to keep going.

It was a fun match that I almost lost track of the time in until it was just about over. I can imagine the stress in waiting to see if this match will continue for a few episodes or wrap up in just one. This match really has been one where strategy has been heavily used to make up for the difference in physical ability. Araya has been able to command so much of the game by that pure power game he plays. Only later in the match has Araya really had to use his head to try and out-think Ei-chan or at least make it less possible to win this with pure tactics. 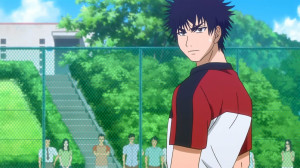 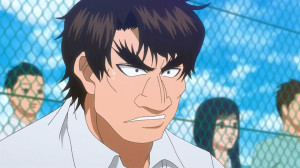 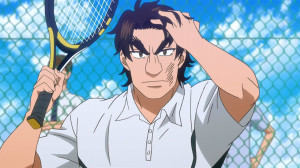 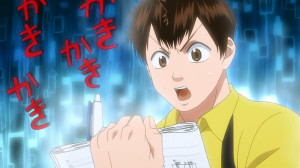 The downside of trying to plan around your opponent’s weaknesses is that it can backfire to some extent. Some people might just collapse once you start hitting their weak points unable to adapt. To some extent you saw that mental collapse with Miyagawa earlier in the tournament. Here you can see how the opposite can occur. Araya is actually getting better as the match continues. He’s understanding his weaknesses and working to address them. Not trying to suppress his emotions, but to control them instead of letting them control him. And all of that is just making him better because there are fewer weak points to take advantage of.

There was a really strong chance to turn this around while Araya was obsessed with playing Takuma. He wouldn’t be the first person to lose at something because he was looking ahead to the next match instead of the one before him. It could have really gotten worse when Takuma finished first. No matter the point in the tournament you shouldn’t ignore the guy you are playing since that can burn you. Sadly for Ei-chan, Araya has been taking a look at his game now and could start taking advantage. Though at the same time it’s a good compliment to have someone like Araya having to take it seriously. 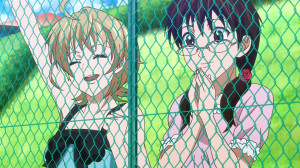 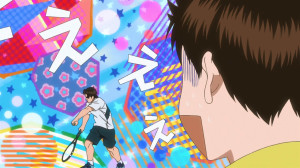 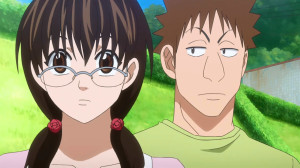 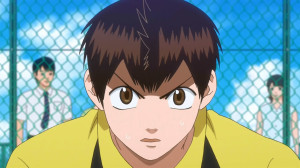 Certainly had to be a good match to be watching from the sidelines. Even though it’s not in his favor, the crowd still clearly remains amazed by how far Ei-chan is able to push it. He’s just kept on going despite playing against some tough competitors. It’s a pretty entertaining match just seeing Ei-chan make a little progress and then Araya powering back into control of the match. Has to be tough for Maruo’s corner though since he fights so incredibly hard for each and every point, while Araya has the power to just instantly steal a point if he wants to. Almost feels unfair at times how easily Araya can do that, but then you consider how much work he’s put in and it’s pretty fair.

Some pretty surprising moments as well. Of course including Araya actually punching himself XD. Very much a cliche, but pretty entertaining to see a guy actually try to calm down that way. Araya’s game is just the kind that scares people watching. All the yelling and even hitting himself. He’s a very emotional player no doubt about that. This match has only made him tougher to beat with him having the chance to reflect on his past and how it always blew up in his face.

Now it all comes down to these serves from Araya. Having to pull out that serve reading at this point isn’t good, but it’s all that Ei-chan can do. An exhausting bit of work, but it can pay off big. It puts some pressure on Araya who knows his form and serves are being read and has to put extra thought into his game. Serve versus Return, it won’t be an easy match to recover in but we’ve seen that Ei-chan has that ability to him. 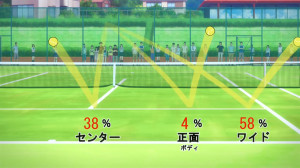 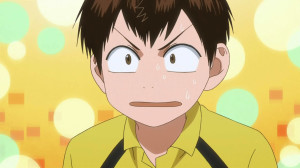 This was a good episode and I thought it was really easy to get absorbed in. This is a hard match for Ei-chan no doubt about it. There aren’t any real changes that stood out to me here, so nothing to say there. The only downside was that the episode had to end really xD. Either way this has been a good match for both players. They have both needed to push themselves in different ways and will only get stronger from this matchup. I don’t think it will be a cakewalk for Takuma no matter who he has to take on.
Score: A