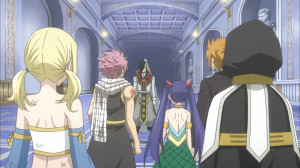 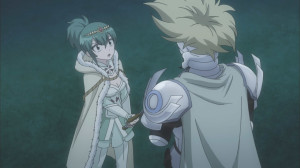 Its an odd state that Fairy Tail is in right now. It feels like there have been these two ongoing plotlines, and one has constantly overshadowed the other, and not always to great effect. With the Grand Magic Games done and over with, its not back to Eclipse and the save the future stuff. Up till this point, the whole future and Eclipse plotline hasn’t been very strong, and with it now front and center, things seem to be changing for the better.

I’m really curious to go back and read the manga once this arc is done, if only because I’m curious if the problems with this arc were entirely from the source material, or if the adaption itself just wasn’t that smart. Adapting manga is a tricky thing, but the whole process of having Natsu and co pretty much repeat their dance in the Palace while the Grand Magic Games happened, and the constant back and forth between all the various locations, didn’t help this arc much at all. 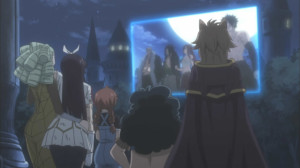 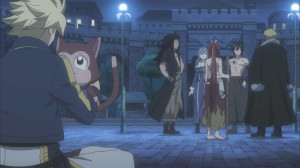 I remember a friend of mine commenting on the whole switching around thing as a “I wonder if they just need to pay/have the seiyuu in each episode?”. That definitely seems plausible, as things could’ve reached the point they did with a more focused approach on each major battle. Of course, I’m left to speculate if this was a way to just save budget and prevent the horrendous stuff we saw fairly early in the series.

Whatever the case, the story seems to be moving on to the main act. This episode finally threw open the whole question of what Future Lucy’s whole story was, and it seems that She wasn’t the only person to arrive from the future. The other person, the one who also told Hisui about the Elcipse 2 project, is none other than Rogue from the future. 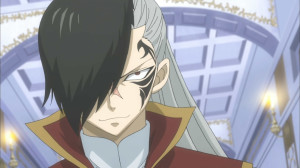 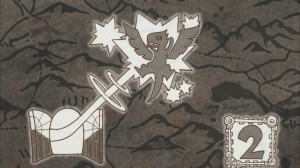 Its a cool reveal, and its slowly revealed throughout the episode. A bit too slowly at times, or maybe its because this whole thing could’ve been revealed three to four episodes ago.

Regardless, we now know that Rogue is from the future and claims to be here to save the world. The big twist is that Lucy is the one that ends up making Eclipse 2 fail by closing the Gate before its able to fire on the Dragons. In an attempt to fix the future, Future Rogue Fires a shadow blade at present Lucy, which is thwarted by Future Lucy stepping in and sacrificing herself. 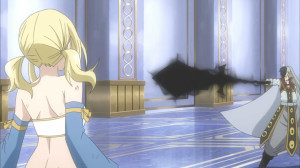 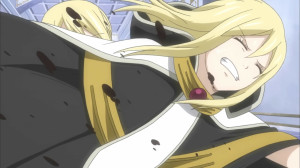 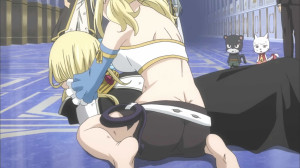 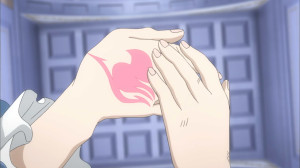 As she dies, Future Lucy not only denies having closed the portal, but she also reveals her hand, which has the Fairy Tail Guild mark missing.

And with that, its a matter of he said, she said. Who would you trust in this situation? A rather evil looking Rogue, that just killed all the soldiers and the Garuna Knights (THANK GOD) or the future version of one your own comrades. 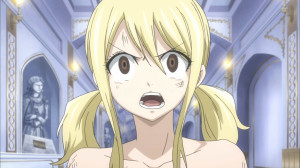 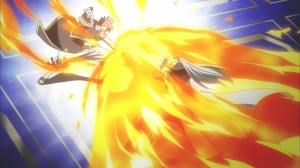 I’m not surprised Lucy and Natsu go with the comrade they know, rather than the sketchy Dragon Slayer. With all his talk of destiny being per-determined, its hard to believe that this Future Rogue would have the mindset to save the world and change the future. It’ll be interesting to see what his true intent is, and what his motivations are.

Moving back for a second… I have to say, what a pointless and unceremonious end to the Garuna Knights. I can’t say how much these characters have annoyed, frustrated and brought the whole story down a few notches. These weren’t antagonists, or villains, they were obstacles created to keep Natsu and co in a certain area until the Grand Magic Games were over. 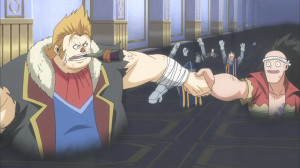 I’ve harped on it before, but the whole return of the Garuna Knights was extremely pointless, made even more so by the fact that they were brought back and then killed off as quickly as possible, when their purpose was done. I feel like the whole part with the Garuna Knights could’ve been avoided, if not the first time, then definitely the second time. God knows Fairy Tail can’t always hit it out of the park with villains, but man… these characters were a new low for what is a series that has amazing characters. Good Riddance.

And speaking of villains… As a villain, I’d say Rogue is a bit left field. I’m sure there’s some reason for it, but I have to wonder… Why Rogue? There’s a dozen other characters that could’ve been in this arc, and with such a big deal like the return of the Dragons, it seems like this might’ve been the golden opportunity for a solid villain. I can think of a possibilities, like say a member of Fairy Tail from the future or maybe the son/daughter of some Fairy Tail member? Hell there’s other guilds and Mages out there too. I’m going to take a leap of faith on Rogue, but I don’t expect I’m going to be rewarded for it too much. 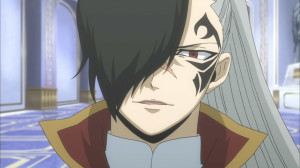 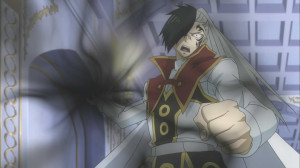 Its hard to not notice that Rogue has an eye that’s got that light that resembles Sting’s Dragon Slayer’s powers. Its possible that either this Rogue defeats and somehow absorbs Sting in the future, taking his lacrima, or that this new Rogue is actually an amalgamation of Sting. Either way, its these kind of questions that keep the story going, and the interest alive.

And the other mystery, is definitely what happens to Fairy Tail in the future. Future Lucy has lost her guild mark, which I’m sure is a good story in and of itself. And while I’m nitpicking things, I’ve got to agree with what some people said in the comments, namely that Future Lucy doesn’t have much of a role. She’s both an exposition device, and an excuse for people to see a version of Lucy die and feel a tinge of hate for Future Rogue. 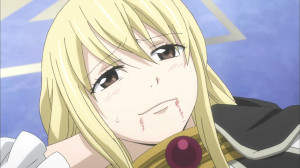 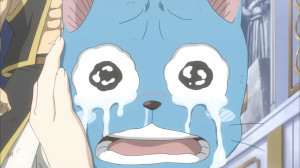 Honestly though… I didn’t feel it. Despite Happy’s big crying, despite the touching moment at the end, I didn’t feel bad about this Lucy’s death. In fact, her logic on her whole sacrifice pretty much killed the moment too. Yes, she’d die anyway if she had allowed Present Lucy to die. I can’t disagree with that, but yeah… It wasn’t the great way for this character go. It felt like all the build up to her reveal was a waste of time and effort in a lot of ways.

And even with Future Lucy’s death, there’s lingering questions about the future left.  The flash forward we got at the end of the last series, for instance, where Its Levy not Lucy who is alive. Levy is definitely alive, so what exactly happened? There’s that plot point that needs to be tied up, and I’m not sure if that’s something that’s actually going to tie in to anything, or if it will be simply forgotten. 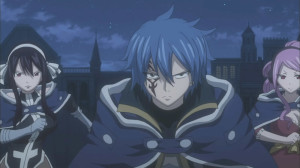 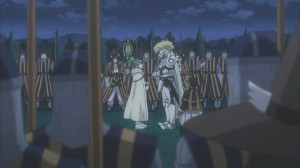 There’s also the fact that there’s a huge collection of Mages in Fiore thanks to the Grand Magic games. Not only that, there’s the Jellal faction and the Hisui faction. The pieces are all in place with this episode, and while it took a lot longer than I’d like, now that we’re focused on this whole Future Story arc, its got its legs back.

In the end, as we stand now, with most of the stuff all out there, and the big setup for the big battle with the Present heroes versus Rogue and potentially the Dragons, I’d say I’m pumped for what’s ahead. I’d just say that the journey getting here has been rocky at best. 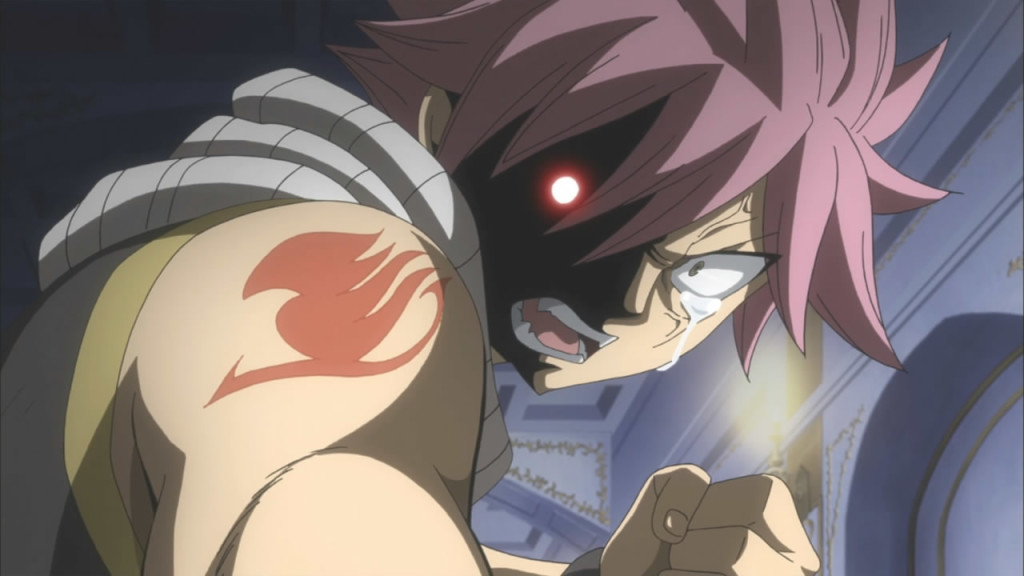 That and having Natsu finally stand back in the spot light, all angry, is quite great to have back XD 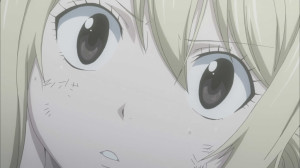 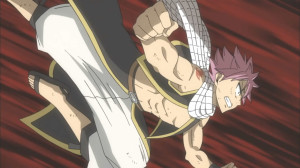 So next week we have Natsu versus Future Rogue eh? Alright, I’m game. Lets see where this goes.