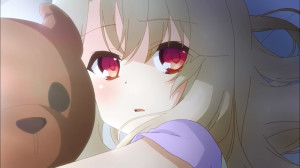 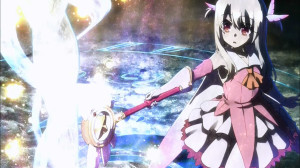 When the first season for this show came out there was just no way I was going to have the time to fully cover it. This time around I decided to make sure that I’d be able to discuss it fully. I still feel this is a good example of a spinoff done well. Doing its own thing with a magical girl setup while at the same time very much being a Fate series. It can get plenty serious, but can also have its fun. Anyways this was basically a slow return to this version of the Fate universe and it was a decent one. It didn’t have a lot of action in it, but neither did the first episode in the first season. We got a feel for what might happen and had a pretty good surprise with how the episode ended.

This episode was pretty much what you’d expect from the start of a second season. Similar to SAO it was a mix of re-introducing you to the cast while leaving some kind of hook or hint as to where the story was going to go this time around. We got to reacquaint ourselves with Illya and her friends. Of course some pretty straight forward yuri undertones to a lot of her interactions with Miyu, but that’s not the worst thing in the world. 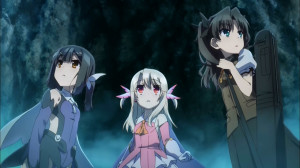 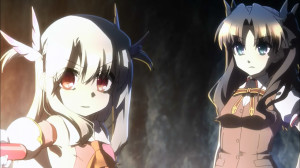 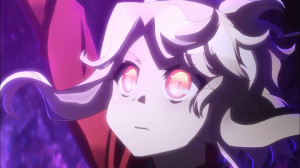 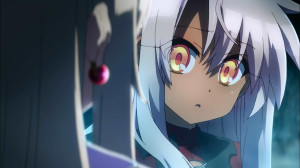 It’s clear that everything connected to the cards isn’t quite wrapped up yet. While we probably don’t care what is up with the ley lines, clearly they are an issue for the magicians side of things. Doesn’t seem like Rin or Luvia can actually return until they’ve taken care of all the chores that the organization sets out for them. Hopefully they don’t have to try doing this kind of thing all over town since the result just from this occasion was pretty serious.

And yeah, double Illya. Hard to really comment on that, but from a normal perspective it’s probably a mix of “huh” and “well ok.” After all is double Illya really the worst thing in the world? Well it probably depends, but for now there isn’t much one can say about this. Clearly using the archer card this time had a serious consequence, the meaning of which won’t be apparent until next week. Of course it did seem extremely strange when Illya originally used the Archer card to install, going all emotionless and just fighting with all she had. This time things went very differently. She tried to help until getting dizzy and then this new Illya appeared Hopefully this doesn’t happen every time she uses install or Miyu will be in the middle of an Illya harem XD. 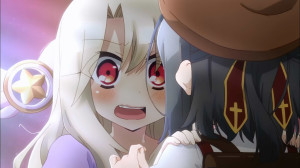 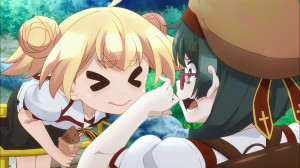 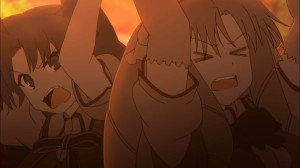 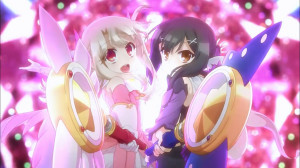 As usual when things are light in this show they are pretty light. The comedy was fine within this episode. From the near miss accident to start the episode to Luvia and Rin almost dying in a bog. Really the transformation sequence made that scene, since the entire time you could hear Rin and Luvia almost drowning in there. Guess that is a reminder that sometimes you should make transforming quick XD. Also point made to some series out this season, that’s how you do a good looking transformation sequence. Maybe not the greatest in history, but it looked nice. It was a good mix of fanservice (which these sequences basically are) and actually staying in touch with the reality of the series. They couldn’t exactly transform while holding on so they literally had to let those two go and hope they didn’t drown before they finished.

While the park scene was handy for the sake of remembering who exactly Illya’s friends are, it seemed mostly to push that Miyu and Illya potential pairing. Not surprising that just about anything that happens causes Miyu to read far too much into it. Unless she is wearing a maid outfit, Illya isn’t planning on doing anything crazy. 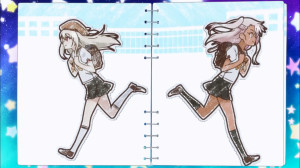 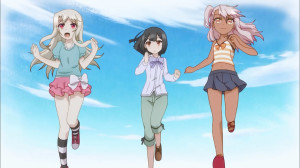 The ED overall was alright. I wouldn’t say it’s the best I’ve seen, just pretty average I felt. A good slideshow of the main and side characters. And of course full of fanservice at certain points…By the end it did focus on the three main characters for this part of the show. Certainly you can’t call the second Illya anything but a main character with the focus she got in that ED. And I suppose I’ll give them props for not holding back on an ironic title for the song. A pretty fitting title now that we’ve gotten a second Illya dropped into the series. 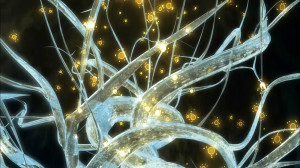 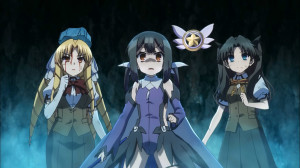 In the end it wasn’t the biggest episode, but it was a decent way to slowly pull us back into the series. Let’s hope that this series has as many amazing scenes as the last one did. With a new Illya popping up the show seems set for some good times ahead. If the first season showed anything its that the series can have some great action moments when it’s time to be serious and yet still bring some good laughs when the situation doesn’t have to be so serious. It was a reasonable way to start the second season, although I’m naturally hoping things will build up in terms of entertainment value as we go along.
Score: B+