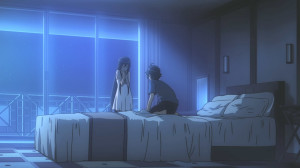 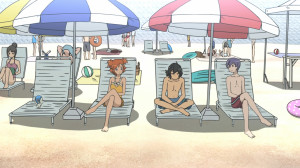 The thing about vacations is that they’re supposed to help you relax and refresh yourself. If only the Midsummer’s Knights could be so lucky.

With FlareKnight covering both SAO II and a bunch of other series coming out this season, I’ve decided to take the reigns of blogging Captain Earth to give the man some breathing room XD With the series about half way through, this week seemed like the perfect time to take over.

This week was not only the start of the second half of the series, but it was also a pretty important week for this series. The focus shifted back to the series core cast, a welcome change after spending the last few weeks carefully introducing and developing the villains. There really wasn’t much of anything on the rest of the Planetary Gears this week, and things focused squarely on Daichi and Hana instead.

As a lead, I’d say Daichi has shown his appeal quite often, both in the start of the series, and even in the recent episodes. Akari had her shining moment when she got captured, and Teppei has gone from being unsure of himself, to meeting his birth father and getting his own Livblaster. It stands to reason then, that Hana should get her own development arc next.

The focus on Hana was welcome, as uptil this point she’s been kind of relegated to being a bit of an airhead and the major delivery device for the show’s fanservice.

There was plenty of that here this week too, as we got quite a few shots of Hana and even Akari during the so called vacation. 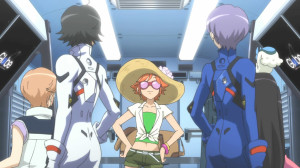 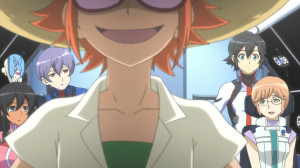 When Hana reveals that there won’t be any sign of orgone energy for the next 3 days, Akari is able to convince everyone to take some time off and relax (not that she hasn’t been doing enough of that already). Akari’s antics don’t end there, and she ends up putting Daichi and Hana in the same room. XD 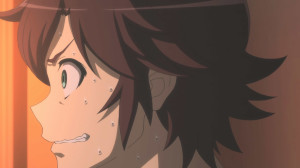 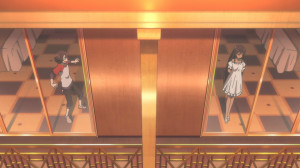 They do have seperate beds, however, so its not quite as risque as it could be. Even so, this ends up hardly being the “alone” time that Daichi and Hana may need to go to the next level. Instead, Hana ends up looking over Daichi each of the two nights they are at their hotel, and crying.

Its quite the odd behavior, and Daichi, although originally just worried about being alone in a room with the girl he most clearly has a crush on, starts to wonder if Hana dislikes him. The thing I perhaps, find quite refreshing about all of this, is Daichi himself. I had pegged Daichi much in the same way Akari had; that he’d rush to her and freak out about the whole thing. 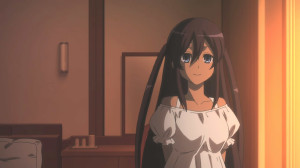 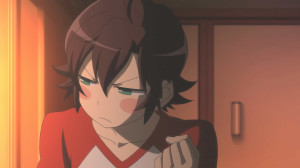 He doesn’t, however, and its clear that despite it being kind of… Not proper, he’s totally okay with the rather nice setup he gets. In fact, when the time comes, Daichi makes his move to try and kiss Hana too.Of course, its Hana who is kind of all over the place. She goes from stating that she wants to kill Daichi, to declaring she loves him, to refusing to kiss him. 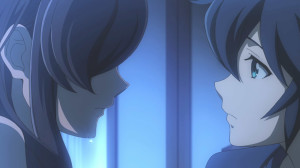 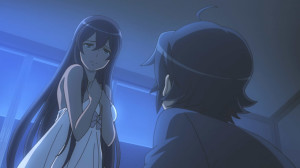 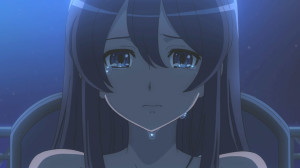 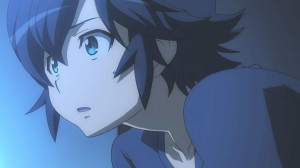 Its obvious that Hana has something on her mind, and that happens to be who or what she really is. In some ways, I’m pretty curious about the answer to that question, and whether it is indeed possible that Daichi will hate her because of it.

The easy answer is that Daichi wouldn’t give a care in the world to what or who Hana is. If, however, as I’m beginning to suspect, its related to Daichi’s dad’s death, then things wouldn’t be quite so easy. Either way, I’m sure we’ll find out soon enough. 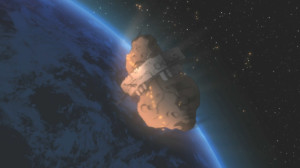 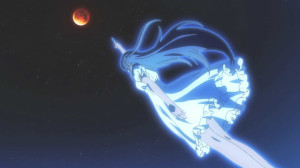 What we do know is that Hana, whoever or whatever she is, can power “the blume” that is apparently hidden underneath Tanegashima Island. Its handy too, as it saves everyone’s hides when a plan from Amarok’s side ends up sending a satelight crashing down towards said Island.

Its interesting to see that the Macbeth Enterprises group is starting to break up a bit too. Kube seems to be getting impatient with Amarok and Malkin, and doesn’t treat them too kindly as a result. Amarok and Malkin, on the other hand, aren’t too pleased that their pawn is starting to boss them around. The restrictions that have been placed on them restrict their movements a lot more, and hence they have to rely on Puck for their next move. 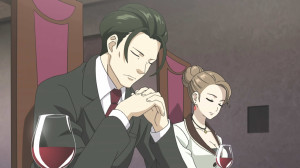 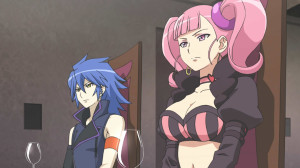 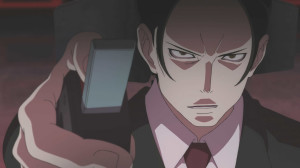 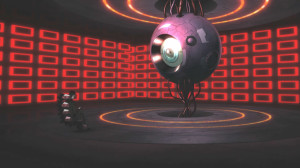 Kube’s an interesting character, in that he thinks he’s in control, and he’s clearly being used. I do wonder if he’ll be able to figure out what’s happening with Puck before its too late for him. Either way, in this episode, he doesn’t suspect a thing as Puck ends up hijacking his satelight and throwing it at Tanegashima.

But of course, Hana does end up using the blume and saving the day, surprising a lot of people. It seems that this move something Amarok wasn’t expecting, and is none too pleased about. Of course, things aren’t so great back with the good guys either, as tensions between Hana and Daichi reach the boiling point. 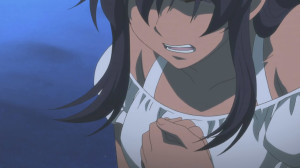 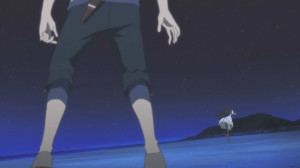 In all of this, the one thing that I can fault Daichi for, is not running after Hana when she runs away in the end. This is probably the one moment, where chasing after her and some good old reassurance would’ve done wonders. Then again, Daichi is brave, but he doesn’t seem to be very good at confronting his friends. He barely managed to do it with Teppei, and it seems that the whole affair with Hana has him quite confused. I don’t blame the kid, if anything, he’s reacting quite admirably given the situation. We’ll have to see where things go next week for all the big answers.

I have to say though, that I quite like the direction the series has taken with this fourteenth episode. While I appreciated the idea of revealing each of the Planety Gears, save for the last reveal, those storylines haven’t been my favorite. Getting back to the core cast and developing them is exactly what Captain Earth needed to do. As things gear up for the second half of the series, I’m finding myself excited for what happens next, something I haven’t quite been able to say about this series for a while now. 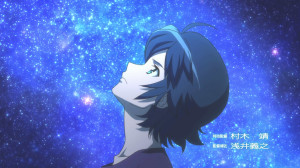 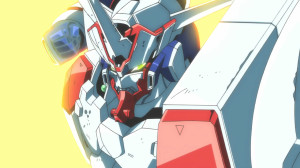 The second and most probably final OP theme for this series is a bit more melow than I’d have expected. I quite liked the first OP of this series, as it had a feeling of adventure, wonder and excitement to it that this one kind of lacks. Instead of a more intense song, we get a more introspective, quieter one. It’s not exactly bad, and it definitely works. If anything it kind of mirrors the slight change of tone for the series, as things are less about expanding your horizons and learning more, and more about seeing where things end up. Not bad, but I’ll still say I preferred the first OP XD 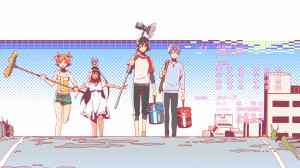 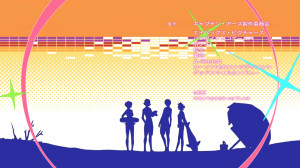 In contrast to the first OP, I really felt like the first ED theme didn’t feel like it represented the series all that well. The flower imagery, and the rather “interstellar” feeling to the whole thing made me think more of weird reality defying series like RahXephone, than the kind of series Captain Earth is. While its got that same calm, thoughtful approach that the new OP does, it definitely fits the theme of the series a lot more. The focus on the four main leads and their relationship is also pretty nice. 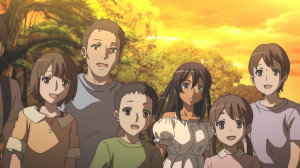 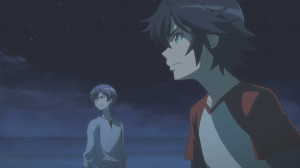 We get to see Hana on her own, and her meeting with Setsuna. With Hana lost, I’m interested to see how Daichi and the rest continue to deal with Amarok and co.