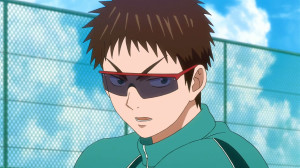 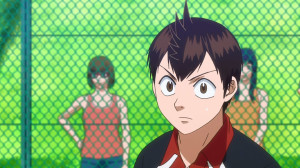 And that settles the match against Iwasa. Certainly another big victory where the result doesn’t quite end up going the way that Ei-chan would probably prefer. It’s not exactly the kind of definite victory that he might have wanted going into this. And yet that is very much part of sports as well. When people push themselves sometimes things will give out and that will be what determines the match. Maruo won because he was in much better physical condition and able to endure that kind of marathon match. Of course it’s not very satisfying to win with those last few points like that, but it happens.

I do think it’s good that Iwasa is going to be able to focus more on painting than playing tennis. Maybe pushing himself to the point of injury gave his mother something to consider. If he’s going to go that far to draw then it’s less dangerous letting him paint. Or hopefully the passion he showed for painting made her realize that she’s been stupid in holding her kid back from something he wanted that badly. 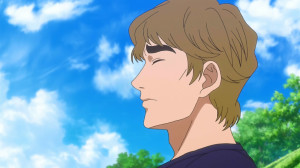 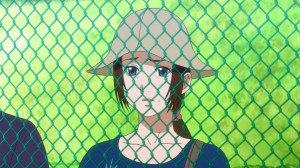 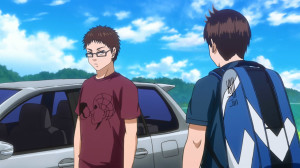 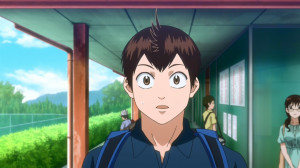 In the end it was a solid victory for Ei-chan. He played his tennis as best he could and pushed his opponent in having to continually raise his game to respond to him. It was looking pretty dire though up to the point Iwasa’s leg gave out. There was a long way to go for Iwasa to win, but he was really raising his game and making it incredibly difficult to just get any sort of points. Might not have gone well if the match had continued on like that. But again, that’s how it goes sometimes. Hanging on for all you’ve got sometimes leads to a break the other way.

Certainly this is a match people won’t be forgetting about any time soon. Seeing a no-seed go up this quickly in this tournament is going to turn some heads. No telling how the next match will go with these kind of upsets happening over and over. Although I think its safe to say that Araya isn’t going to be the type that loses because his body can’t keep up with a high tempo game XD. 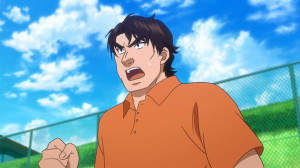 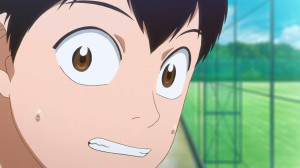 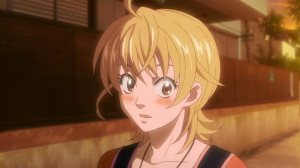 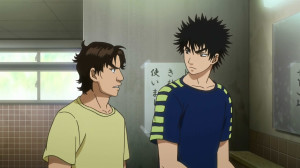 I can agree that Ei-chan really needs to learn how to enjoy a win no matter how he gets to it. If you set up a high standard for how you want to win that’s just getting arrogant. People who lose will feel bad enough without seeing the guy who won feeling dissatisfied with it. Natsu has the right mindset, things happen in a match and you have to appreciate the win. You certainly wouldn’t want the opponent to be feeling sorry for themselves or blaming a loss due to injury. Appreciate the result and go forward.

Kind of funny that he couldn’t really get a straight answer out of Natsu about her going pro. Hard to say what that means for her motivation, but it’s probably not something she’s eager to talk about. At least she gave some good motivation to Ei-chan to win that match. Not that he really should need more motivation, but hey it’s something else to keep in mind.

Should be a good match against Araya. Having to push himself against someone who is seriously chasing the dream of going pro. That’s such a hard level to reach, but he’s giving his all to get there. Not going to be someone easy to beat, but really that wasn’t something you could say about his last big opponents. Certainly the conversation he appears to be having with Takuma should be interesting. As will Ei-chan having to ask for all the weak points on Araya so he can target them. May help even the odds going into the next match. 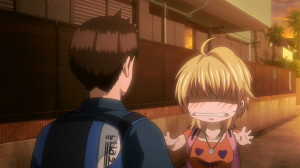 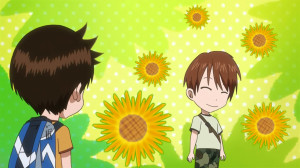 Another episode where if there were changes I didn’t notice them. It seemed very loyal yet again. It was a good episode and concluded a match against a strange opponent. The questions about going pro are being thrown out which at least is something for Ei-chan to think about. He is skyrocketing upwards right now and in the best 4 of this tournament. It’s a question that at least people should be posing to him. Should be a good match against someone who has faced that question and made his choice in Araya.
Score: B+