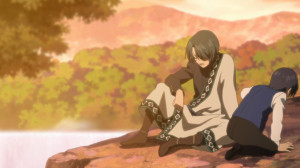 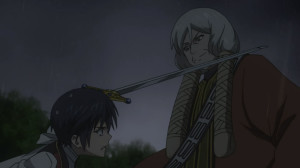 If there were ever a series that demanded, needed and urged for a longer episode count to tell its story, its The World is Still Beautiful (Soredemo Sekaii wa Utsukushii). Its been hard to savor a flavor that’s been kind of the staple of the romance genre of entertainment in general, let alone anime.

I think one of the reasons why I personally liked The World is Still Beautiful so much is because of how uplifting the show can be.That and the fact that Nike and Livi are probably the most believable, well written couple in recent memory.

What truly makes Nike and Livi’s story so enthralling is the fact that both serve to really balance out each other, and stand as equals. These aren’t your classic Shoujo stereotypes, but definitely real people with feelings, failings and good points that round out to make a truly likable whole. The chemistry between the two leads is real, and even through the shoujo lens that this series clearly has, the characters and the story come off as something truly different and unique.

This is a show that, despite its rather limited run time and rushed pacing as a result, really gets the key emotional moments down and makes for some truly satisfying romantic moments.

Of all the series I’ve failed to blog regularly as a blogger, writer or whatever you’d call me, I feel the most happy and sad about not blogging this series regularly. On the one hand, I wasn’t able to write my heart out on a series that I truly can and do want to write about. On the other hand though, I got to see the series in chunks, sometimes 3 episodes at a time, and that was quite a rewarding experience in and of itself. This is a series that really does hit the sweet spot for me, as it will for anybody who’s a huge of romance, love and all that fluffy feel good stuff.

But while I praise the series for all it gets right, and I personally like it quite a bit, I can’t exactly forget the problems it has either. The major issue, one that people all over the internet have pointed out, is that the pacing for this series is seriously rushed. Cramming what is probably a 24 episode series at the least, into 12 episodes really does hurt.

What’s perplexing to me, is that despite how rushed and lightning the fast pace is, particularly as we hit the final 3 episodes of the series, I was still not only gripped, but feeling a wealth of emotions, smiling, teary eyed and awwwing all through out.

Its a testament to the amazing character work, the story, the animation, the writing, direction, the seiyuu work, everything firing on all cylinders, that despite how quick everything is, it still works, and it hits hard. Would it have worked better if we had a few more episodes even? Hell yes. And I’d love to see that.

In particular, the last 3 episodes of the series feel pretty disconnected from the series, in that it feels like we’re getting the key points that are important to probably one of the most important arcs in the story. The whole return to Nike’s country, is actually a story arc that combines equal amounts of darkness, comedy and touches upon feelings of family and bonds.

In many ways, the rain country is a lot more representative of Eastern Asian culture, and being from a country in Asia myself, I could definitely relate. The closeness of famiy, Nike’s issues with her grandmother, the whole idea that the eldest member of the family is kind of the head of the family, all those sentiments come across beautifully. There’s even the childhood friend who’s a cousin thing that’s a common occurence in Asian cultures as well.

There’s a rather interesting dynamic to Nike’s family and country, and while its in many ways the polar opposite of Livi’s situation, its not without its own challenges. Resolving that, and leaving her family to be with the man she loves, and the pain and bliss that comes with it, is a big part of the story. But there’s more to it than that too, as both Livi and Nike really do pull out all the stops for each other.

I think that was perhaps, the biggest disconnect from the rest of the series. At around the Bard arc, Livi and Nike start getting closer, but in the Rain country, they’re pretty darn close. Its not unfathomable or unimaginable, but there’s a sense that I missed a few bits that would’ve brought us to this point. I guess thats the big tragedy of the little length.

The ending is definitely satisfying, and in a season where we’ve had some truly horrible endings that have just kind of cut off the story, The World is Still Beautiful ends at a place that feels both organic and conclusive enough.

In some ways, this series really is a relic from the past. A past where more traditional, cute stories like this could work, could sell and could resolve without stringing the viewers along. The sad reality, however, is that shoujo romance, and especially classic stuff like this, just doesn’t have much of a market anymore. Its in some ways, a miracle that we got what we got. The Shoujo genre of anime in particular, seems to act as a true fancy advert for its source material than anything else. Its still true of The World Is Still Beautiful, but at least the overally experience is amazing, and the ending, nice and pleasant.

And at the end of the day, I think I’d still recommend this series to people who enjoy romance or romantic comedy. This series has such great characters and develops a fascinating web of relationships that just beg to be explored in more detail.

To conclude, the highest compliment I can give this series is that its a series that ends nicely, and yet I still want to see a remake or continuation some day (unlikely as it may be). A series that would take its time and properly develop the story at a pace that it truly deserves. I can’t say I watched this series week by week, but I can say that I will definitely miss this beautiful reminder of how awesome the shoujo genre was, is and where it can go from here.