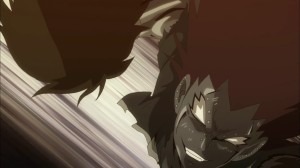 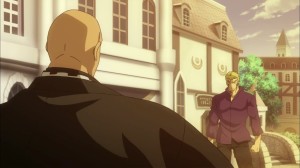 Another solid episode from the series that’s finally picking up some steam. While the plot progression is still a bit slower than I’d like, this week’s episodes makes up for it with a heavy dose of action. Not only are the battles this week exceedingly fun to watch, well animated, but they bring back that element of surprise and unknown that’s been lacking in the series since its return.

One of the things that I believe makes Fairy Tail so special is the element of surprise and wonder. Its easy to bring anguish, or pain to characters, or to raise the stakes, but those key moments when the heroes come back and hit back, those have to feel good. And My God, did this episode have not one, but two of those 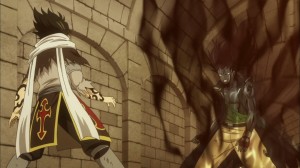 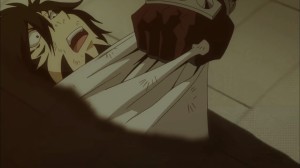 Carrying over the momentum from last week, the episode opened up with the battle between Iron Shadow Mode Gajeel and possessed Rogue. Gajeel just continued to deliver on the goods this episode, surpassing himself and going a step farther and defeating an entity that even Mavis did not know about.

The satisfying feeling of seeing Gajeel constantly one up an entity that had clearly had the superiority was great to see. More than anything, rhis cements Gajeel and Natsu as equals, at least power wise. While Natsu is the main character of the story, and will forever hold the top dog spot, Gajeel is easily becoming one of my favorite Fairy Tail Mages. 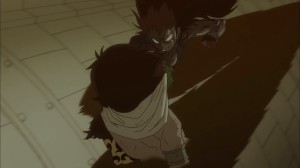 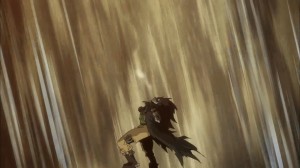 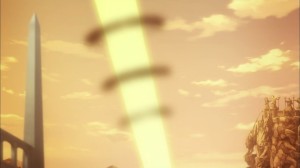 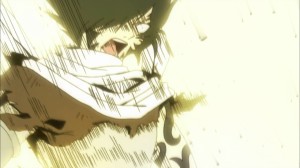 And even if on the rather bare side, the story got its continuing mystery simmering.  Who is this Shadow Entity that was able to take over Rogue? The phrase that caught my attention was “This era’s rogue..”.

This pretty much hints at this entity either being from the future, or being beyond the idea of time at least. I’m sure this will play more into the ongoing mystery of the Eclipse Gate and what Natsu and co are dealing with. 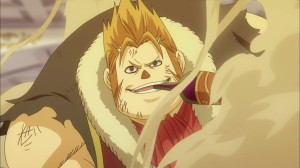 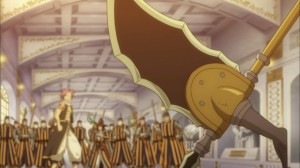 On that front, I was definitely disappointed to see that Natsu and co had to run into the same enemies they just spent quite a few episodes dispatching. That pretty much rendered the whole past battles sequence moot didn’t it? It seems like those characters seem to exist for the sole purpose of keeping Natsu and co occupied while the rest of Fairy Tail is doing the more relevant stuff in the Grand Magic Games. 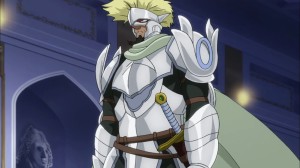 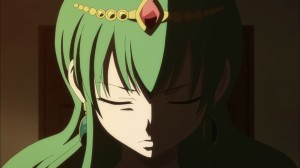 Despite the rather annoying repetition of enemies, the mystery simmering continued with Arcadios. So it seems like last week it was wrong of me to doubt Future Lucy. Arcadios seems convinced that its the Jade Haired Prinesss Hisui that’s lying. She’s definitely supscious, derailing Fairy Tail, and also already having activated the Eclipse Gate. I’m interested to see where this goes, and what Arcadios ends up running into. Meanwhile Natsu and co can just keep fighting the Garria Knights I suppose.

We didn’t get much progress on the Erza and Minerva fight either, and it was more or less Minerva knocking a weakenned Erza around… Gray and Lyon meanwhile, had their own battle, with Lyon refusing to hit Juvia and Cheria being quite frustrated about it XD 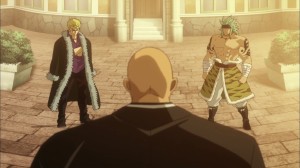 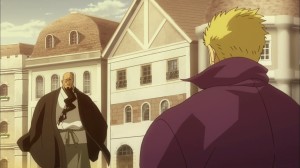 And lest I forget, the title of this episode was actually “Unlimited Lightning”, which was clearly referring to Laxus. Much like Gajeel, Laxus is another character that’s gone through an anti-hero redemption arc after being one of the early story arc villains. I’ve found myself really liking Laxus as well, and its been that way since Laxus made his awesome return in the Grimoire Heart battle.

Here… We really saw something I hadn’t expected. The whole Fairy Tail surprises just kept on coming. First we had Jura not only crash the party, but pretty much take out Orga in ONE FRIGGING HIT. I had expected some outrageous battle, but I guess Jura is THAT strong. 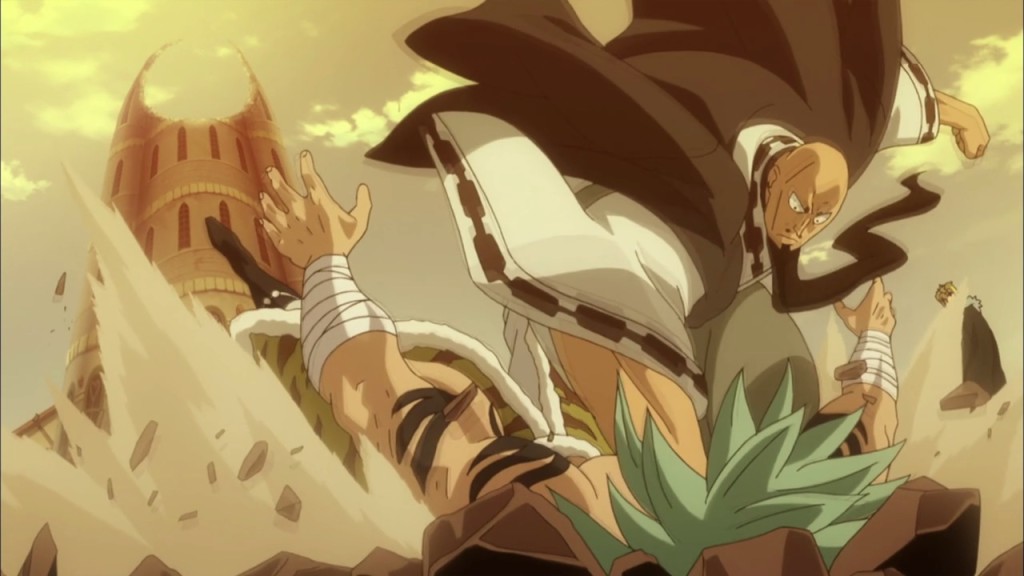 Added to that was the information that Jura had risen in rank in the 7 years since Fairy Tail had been frozen on Tenroujima. Now at the fifth rank, he’s apparently the strongest human Mage. Its interesting that the 10 Saints got another mention here, and I’m interested to see how the top four will play into future events.

But getting back to Jura and Laxus, with Orga taken out in one blow, It was Laxus facing someone who’s quite a few power levels above him. This was definitely a new sensation and situation to see Laxus in. Laxus has generally been the strongest person in literally any situation. In this very arc itself, he took out an entire Dark Guild, which included his own father, by himself. He also pretty much saved the day in the Grimoire Heart battle, so things have been pretty much always in his favor. 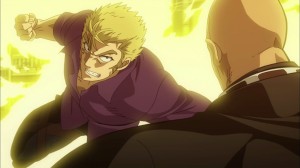 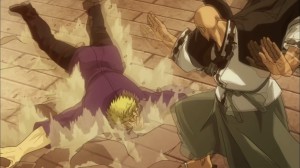 Yet, for the first time in Fairy Tail’s history, we saw Laxus as the underdog, and man… Was it exciting. I couldn’t help but root for Laxus, who clearly had a very unfair match up. And when Laxus rushed in, and got smacked down similar to Orga, I breathed out in disapointment. It was very much a case of wanting something that just couldn’t happen, just wasn’t reality, Laxus couldn’t possibly deal with Jura and yet… 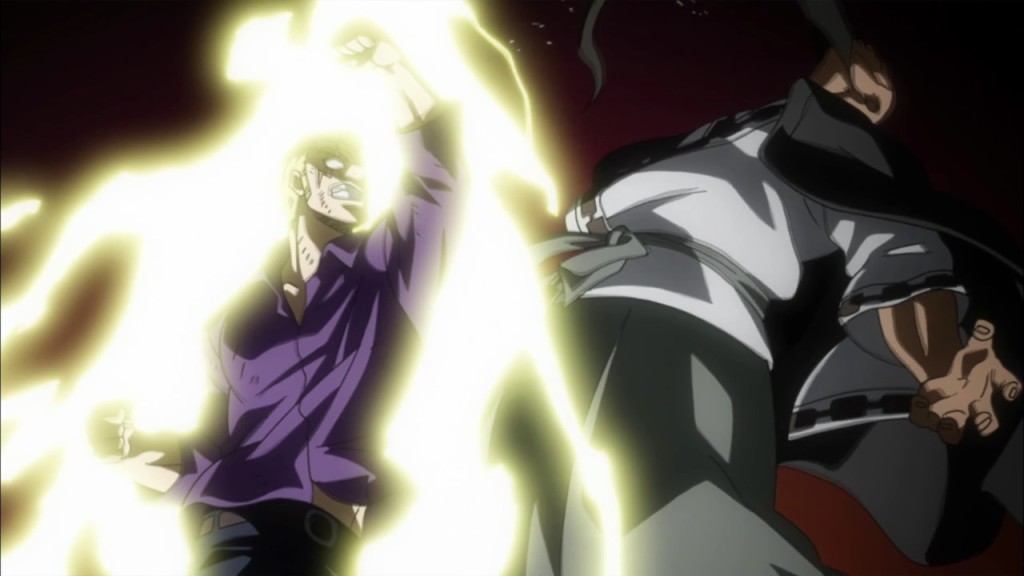 That punch happened. It was not only a spectacular way to end the episode, but it brought back that whole “the heroes” surprise in a good way feeling into the series. Seeing Laxus get up from the ground, smack Jura a good one, was just so… friggin… SATISFYING.

I’ve often said that I enjoy whenever this arc seems to focus on the Grand Magic games, and I can’t help but feel even more so with this episode. With the whole Natsu and Eclipse thing kind of chilling in the background, its great to just see the battles that are truly spectacular.

If there’s one thing that continues to plague the series, its that its still jumping around a bit too much for comfort. I felt like the bits with Natsu’s group an the Garria Knights definitely slowed an otherwise very solid and exciting episode. I think even if this arc of Fairy Tail has parts that just don’t work as well, there’s enough of the charm, excitement and great character moments to get us through this.

If there’s more stuff like what we saw in this episode, then sign me up for Fairy Tail! 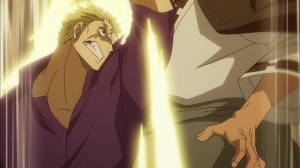 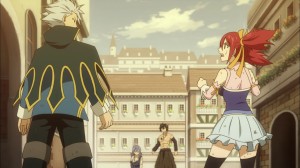 Jura vs Laxus continues, and we also seem to get back to the whole Eclipse Project issue (unfortunately!). Well see you all next week! (hopefully! XD)