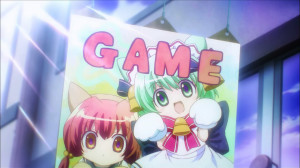 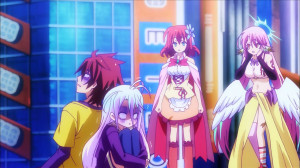 Well that’s a hilarious ending to the episode that I didn’t see coming. Though it certainly raises an insane number of questions. Really how did the warbeasts gain knowledge of Earth? Particularly the ability to recreate Tokyo like that? Really the question comes down to how did this war-like race gain gaming technology in the first place. The answers probably all tie into that woman who was giving the orders. The one who arrived and united the warbeasts like that. Wouldn’t be surprised if she’s actually just a cosplayer that tricked the warbeasts and took over XD.

The issue really is that Sora and Shiro are in an environment they are not used to. In the end they had pulled back from society and were playing games in safety. This is a place they probably didn’t want to see again. Of course they did adapt to going outside in this new world so they should be able to manage. If they could treat a fantasy world as different then they can treat a digital one as different. 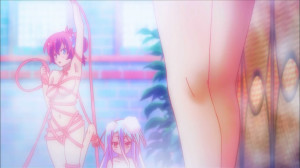 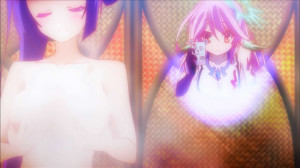 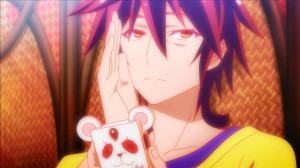 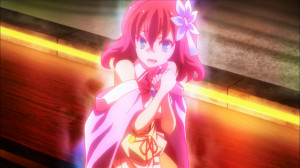 Also very possible that the last command Sora had for Steph might come into play here. It was certainly important enough that he had Jibril make sure no one else could hear it. I’m just not sure exactly what it will be. Doing something that will snap Sora and Shiro back to reality? I don’t think you can use pledges in order to make someone a competent gamer so that’s probably out. Should be entertaining at the very least since Steph does seem to get stuck with embarrassing duties.

Really this episode was all for embarrassing though. I guess they did need an episode to step back and take a breath. Last couple episodes were intense because of the whole Sora missing situation and the pressure on Shiro. So a bit of fun here was probably in order. The whole bathing scene was comedy central. From poor Kurami trying to use magic to improve her bust size and getting called on it, to Sora thinking he could go female to get into the bath but finding out it’d be permanent. Not surprising, but Shiro was not in favor of such a thing XD. 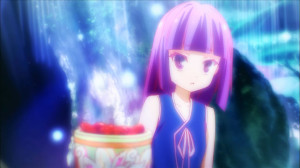 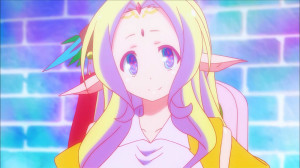 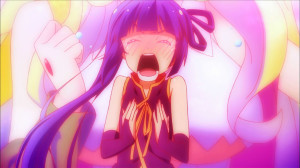 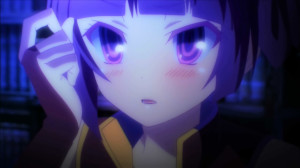 I did like getting to know more about Kurami though. She was a bit of a mystery especially in how she got involved with an Elf. A kind of sad reveal that plenty of Imanity are being used as slaves by the Elves. Probably not that big a surprise though. With humans doing pretty poorly in games up to this point a good amount probably lost their way into slavery. Thus leading to their kids having to take up that unfortunate duty. Not so much a surprise since really if people can do it to each other it’s not a stretch to see actually different races doing it.

Nice to know at least that Fi helped change things for Kurami. A girl who reached out to a slave and made a friend. Certainly shows their tight bond that has a feeling like Sora and Shiro. Of course somewhat funny that Fi is such a brutal character, but that certainly works. Not surprised she isn’t attached to her own people since they would consider her closest friend an object.

I also really enjoyed the banter between Sora and Kurami. Two people who know everything the other person has been through and can use that in teasing them. Sora can pull out Kurami’s 3-sizes and she can pull out every embarrassing thing he said to Shiro. I think they certainly get each other and will get along pretty well. Her job in this game isn’t too complicated, just to act as another set of eyes to keep the warbeasts on edge. 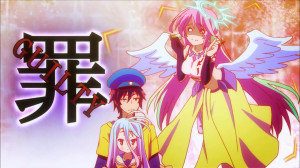 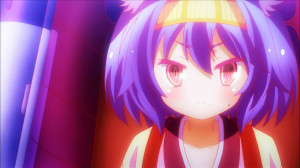 An important lesson coming from this episode is don’t mess with Jibril. Kind of scary that getting knocked out of the sky pissed her off enough to wipe out all the Elves in the area she landed in. That war must have been insanely brutal. This might be the most hilarious game so far with Jibril and Steph joining Blank as active participants. Not a bad plan to make use of the crowd’s fear and making them suspicious in order to help make sure there is no obvious cheating. Also worth it just to have Jibril hanging over the carriage to scare everyone into making an opening for them XD.

It will also be interesting to see how they convert Izuna. Someone who has clearly been playing games out of fear for a long time and not fun. Will see how she matches up against Blank who while playing tense games haven’t lost the ability to enjoy playing them. Whoever is leading certainly doesn’t seem to be all about fun. Probably just about winning and no matter how cheap or boring the method the result is all that matters. 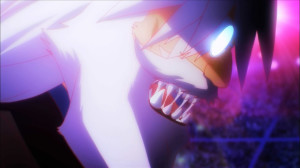 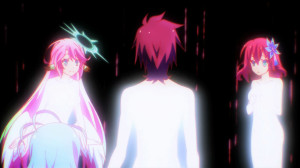 The next episode should be pretty fun. I’m looking forward to seeing how Sora and Shiro bounce back and how Jibril and Steph play into things. Heck I’m just curious to find out what the rules for this game even are. Izuna will have to be a pretty overwhelming enemy to be able to play against that many people on her own.
Score: A