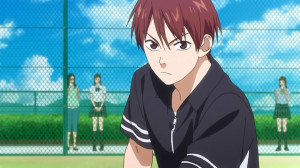 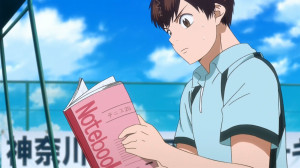 A pretty good match so far between Maruo and Miyagawa. Putting up a much better struggle than his match a year ago against Oobayashi. He’s pushing himself to keep up with a skilled opponent and finding a way to stay in it. The real question is whether or not he can get the lead in this match and actually win it. No matter how ugly a win is a win, he just has to get there.

Miyagawa was being pretty meticulous in this match to be sure. He wasn’t sure what Ei-chan could really do so he was taking his time to pick his game apart. Though perhaps he took too long in doing that since that allowed his opponent to be the first one to try and change up the match. In terms of who has a winning shot the answer is obvious, but that still doesn’t mean Miyagawa can outright win the match like this. 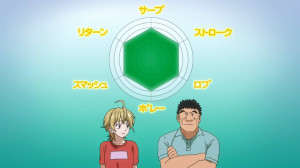 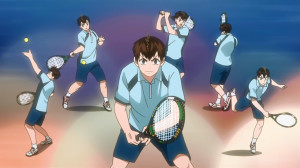 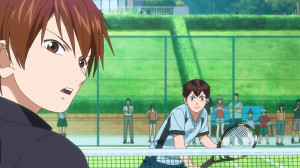 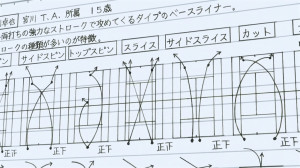 It was somewhat funny that the big weakness for Ei-chan was that he had no outright weakness or strength. He was very average in many areas. It does sound logical to focus on everything evenly so you don’t have a big weakness to exploit, but it is a fair point that you will be left without a weapon to win the match with. With time Ei-chan could just be an overall very strong player with many weapons, but that’s not something he can think about right now. The current situation required him to take risks in order to break Miyagawa’s strategy to pieces.

And it is working so far as it is pushing Miyagawa to take risks himself and play out of his comfort zone a little. His big plan to win quickly fell apart and now he’s got to keep his own serve game before he can worry about anything else. The match itself was pretty entertaining overall. It was fun to see Ei-chan just flip the heck out when he realized what Miyagawa was doing and seeing him work for every point he could get. They did gloss over a few of the points, but that’s not a big deal since there are a lot of sets to take into consideration. 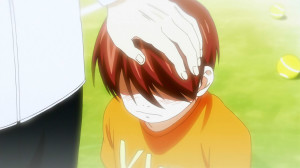 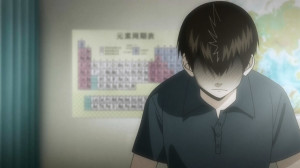 The one thing I really enjoyed seeing was how frustrated Ei-chan was when reviewing before this tournament. You can tell there is a serious desire to win in him, but he was up against the wall. There was no time he could sacrifice from school work without it being hurt and he was already doing everything he could. That line where you just can’t get more out of your time than you’d wish is a tough one. All the more reason to put everything into this match.

You can tell as well that Miyagawa has had some tough moments in his past also. He really struggled with many aspects of the game and was painfully frustrated. No matter how understanding his parents were that didn’t help anything. They were still running a Tennis Academy, how could Miyagawa really live there while not playing tennis or trying everything he could? I give him props because he found something in that frustration that pushed him to practice as hard as he could to master one thing that would allow him to cover his weaknesses. 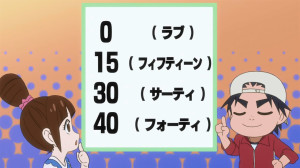 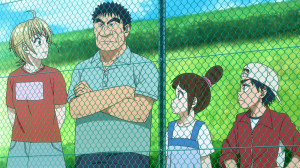 Changes weren’t very extreme this week. The match itself was pretty loyal and stayed on point especially with crowd reactions. The big change was Yuuki being at that match to watch and bringing that girl along. It probably was done again to help explain the basics of tennis and the scoring system. Natsu can hardly be asked to explain everything. Really it fit in Yuuki’s personality to brag of his knowledge anyways so it’s not a bad move. Besides that girl the match was pretty much the same. 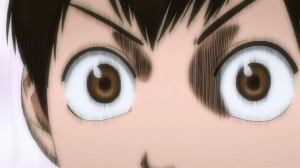 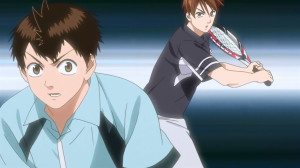 Now the match is moving into its later stages. I can’t imagine this match will last beyond the next episode at the pace they are going. It’s still hard to say who will come out on top, but it is bound to be entertaining. This really is the show right here, seeing the tennis of both players and how they struggle to find a way to win.
Score: A-