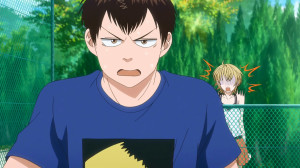 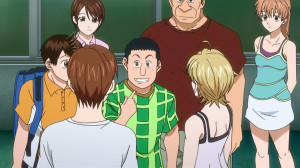 And here we go. A year has passed and Ei-chan is ready to make a dramatic return in this tournament. At least this time he didn’t have the misfortune of facing a seeded player right out of the gate. Though his opponent did give him some trouble early on, things worked out just fine. Now we’re all set up for the match against Miyagawa and that will be a pretty entertaining one.

This match wasn’t all that difficult in terms of actual skill, but more of a mental challenge for Ei-chan to get past. Certainly not a strange thing that when the pressure is on you can tense up and get trapped in a downward cycle. This was such an important tournament for Maruo because of all the work he’s put in for it. Almost ended up being another negative memory and probably would have hurt all the more since this was a match he could definitely win. 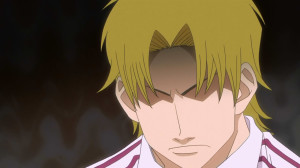 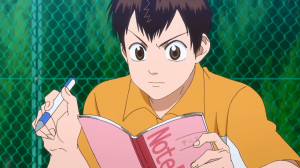 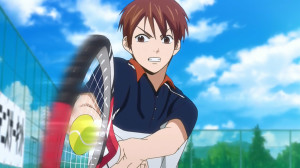 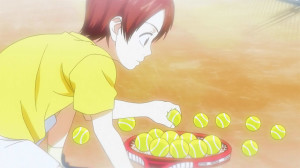 His opponent may have had experience, but he didn’t have more skill. Of course it just shows the huge difference between a school club and the STC. That’s just a place where you go to seriously improve and aim for the pros. The amount of time spent practicing is world’s different. It was funny that his opponent had this personal grudge in his mind that was completely lost on Ei-chan. Clearly the guy cares a lot about his grades and then having Ei-chan move into tennis which was his hobby might have been treated as a challenge. Just a bit hilarious to see this guy all worked up when there was no hard feelings on the other side.

It was a good thing to go and see Miyagawa before the upcoming match. It’s bound to be tough since we can see how he can hit quite the variety of strokes. A good point made that he isn’t very versatile. He can hit that variety because that’s all he has in the end. Though I still give the guy props. Miyagawa made his way up to 5th seed all based on incredible hard work and recognizing that he may be lacking in natural talent but he could make up for that. Should be a good match between two very hard workers. 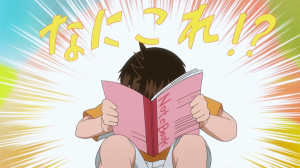 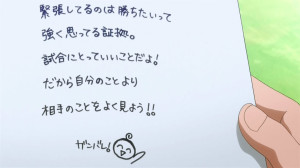 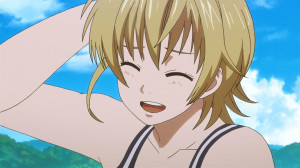 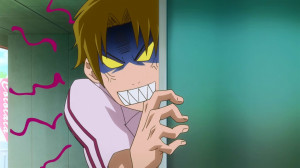 The turning point for Ei-chan’s first match though was definitely Natsu. Did get a good laugh at her having written in Ei-chan’s notebook like that XD. Certainly a girl who doesn’t mind pushing into people’s personal spaces. But it was very necessary and it showed that she understood him quite well. Also now we can see that little drawing that appears in the OP and where it came from. It was solid advice. Being tense is natural in something you are focused on, but good to look at the opponent and not just oneself.

Also a nice little moment after the first match. Certainly both these characters can do a good job at making the other feel a little embarrassed. While the focus will remain on our MC, I wouldn’t mind if we got to see a bit of Natsu’s matches in this tournament. Though good to know at least that she’s doing her own thing while being a supportive friend. Is good at stirring up trouble though with declaring that Ei-chan would become a pretty key part of this tournament. Guess we’ll see what kind of future seeing powers she has XD.

Not really worth adding a changes section for this episode. It was pretty loyal aside from a few extra lines given to Koshimizu and that jealous scene for him after Natsu and Maruo had a chat. 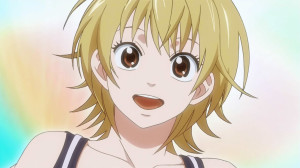 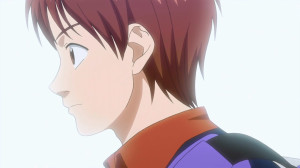 Overall a solid episode. It was pretty well just introducing the first matches and showing a bit of growth for our main character. The real challenge though starts now. Maruo hasn’t made it past the 3rd round yet and will need to beat a seeded player to make it happen. At the very least it won’t be a one-sided defeat like it was last year.
Score: A-