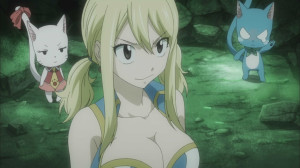 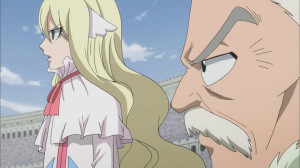 Binge watching an anime series is generally a pretty good idea, especially when its something like a shounen series. After nearly a month off due to exams and college, having watched the last 4 episodes of Fairy Tail, I’m still kind of unsure about this new series. There’s definitely some elements of the previous series that have carried over, such as the great voice acting, the story, the characters and all that good stuff. There’s also some stuff that’s just gotten lost in translation, and some of that “stuff” is what made Fairy Tail such a special and interesting series.

Simply put, Fairy Tail just isn’t firing on all cylinders lately. One of the major elements of this series that really made it a joy to watch week by week, the excellent pacing, is the first thing that’s really gotten lost in the last 4 episodes.

Up until episode 04, I think the pacing was pretty solid. We got Gray’s battle with Rufus, and that took up the majority of the episode, and despite some technical blemishes on the art and animation side, the fight wasn’t bad.

And that’s just it, Fairy Tail isn’t bad, but its not rising to become the series that it used to be before the 1 year hiatus. There’s bits of greatness thrown in here and there but generally the whole bit of the last series feels like its wasting time, delaying the story’s meaty good bits with excessively repetitive dialogue and rehashing the same exposition over and over again. 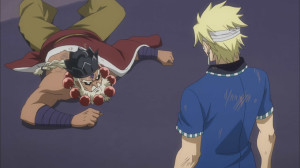 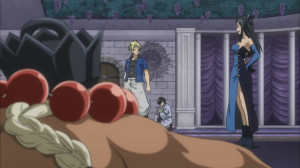 So episode 05, we get a look at what happened with Sting and Lector. Color me oddly surprised, as I was kind of okay with Lector dying and the despicable master of Sabertooth getting what he deserved. Yet, in the end we learn that both Lector and The Guild Master are both very much alive. In fact, The Guild Master simply gets “booted” from his position since he “lost” to Sting’s power. Oh and Lector? He’s very much alive, just been teleported to a different area and is being held hostage.

The whole thing reeks of the absurd, and yet at the very same time, there’s the whole idea of Minerva manipulating the whole issue to her advantage. Now Minerva, there’s an interesting antognist. Unlike her dumb as bricks rapist of a dad, she actually gets that the difference between her Dragon Slayer and Fairy Tail’s is the will brought on by friendship, by caring for those precious to you. 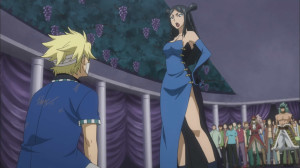 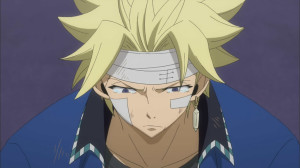 Yet… unlike Fairy Tail, Minerva uses Lector as a hostage to make Sting stronger. Its fundamentally the same idea, those precious to you make you stronger, but it takes a darker, more twisted outlook when coming from Minerva. Added to that, well, lets not kid ourselves, she may be nominating Sting to be the Guild Master, but its quite honestly Minerva who’s calling the shots.

I think the parts that really didn’t sit well with me were those that concerned the battle between the Garou Knights and Natsu’s party. This whole part was so… undeniably underwhelming that I was wondering if I was watching a filler episode. 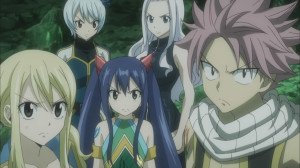 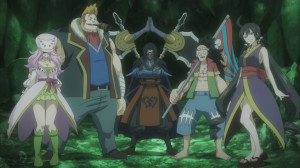 For one thing, the Garou Knights were really cookie cutter characters. Fairy Tail has a bad habit of introducing uninteresting cannon fodder for Natsu and the rest of Fairy Tail to take on, and these guys were no different.

What made it worse though, was just how badly paced all the battles were. The POV would constantly change, cycling through all the fights every few moments, leading to not much progress happening on either front. Just when things would get slightly interesting again though, the switch would happen and you’d lose all that momentum and start watching another battle.

Its something so uncharacteristic of Fairy Tail, and I really felt like I was watching One Piece or Naruto Shippuden (both series have notoriously started to drag out their fights and ruin their pacing as well). 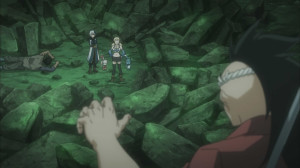 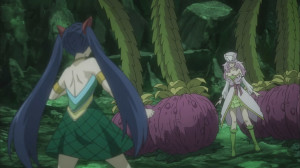 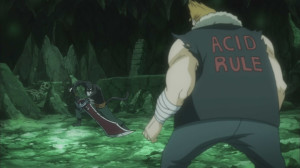 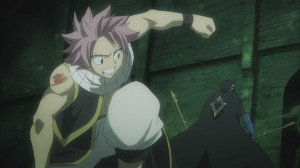 The whole gauntlet of battles could’ve really been wrapped up in two episodes instead of four. The extremely chaotic nature of the POV switching made it worse. It would’ve been nice to just see each battle on its own, and then possibly reconnect with everyone at the end. Hell, if that was too much, then half an episode per battle might have worked?

And its not like this is something that Fairy Tail’s ever been bad at. We saw the good pacing in this very series’ second episode. Its just grating to see Fairy Tail make what are rookie mistakes, when its such a long running and veteran franchise.

Calling back to the yin-yang nature of the series thus far, despite the fact that the battles were paced badly, the animation was on an upshoot. From an artist standpoint, I feel like the series is finally getting into the groove of things. Episode 8 in particular, which had everything resolve in terms of Natsu and Co’s battles, was pretty sweet looking. 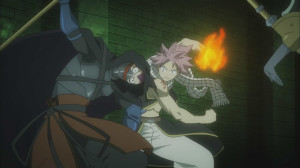 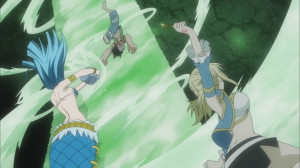 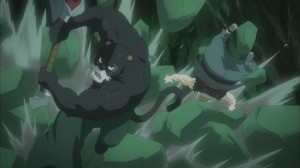 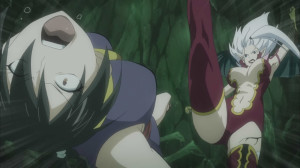 Whether it was Natsu beating his opponent with his bare fists, or Lucy’s Aquarius wrecking havoc, Wendy unleashing her Sky Dragon Slayer Magic or Lily taking out Acid Bottle man, it was all nice to see those final attacks. 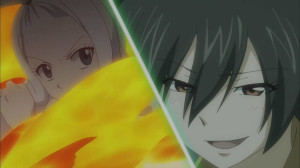 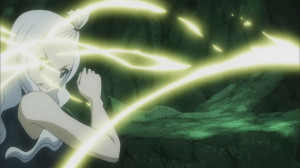 While the animation’s clearly improving, the dialogue was particularly cringe worthy at points. Its worth noting that Mirajane got the brunt of the abuse. Most of Mira’s battle was about her getting hit by her opponent’s “paper” attacks and going: “Oh! This one has a fire element!” or “This one is lightning”.  Not only was the audience very much aware of these facts, but the series took the rather painful approach of doing this with each and every type of attack the paper lady had.

The cutbacks to the crowd stands where the rest of Fairy Tail was, were even worse. The same basic idea was rehashed again and again by different characters; “We can’t really do anything but believe in Natsu and the rest!”. 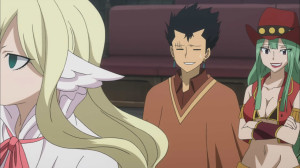 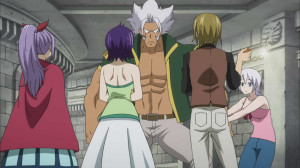 Its like the series was afraid that the audience would forget what it had mentioned, and had to reiterate it each and every episode.

And with all that said, when things did get down to business in the eighth episode, there was more of that greatness that makes Fairy Tail such an entertaining watch. 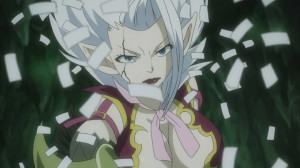 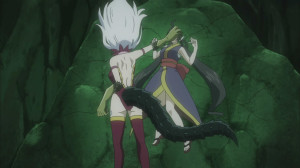 Mirajane unleashing her full power and devastating her opponent was nice to see, despite the build up and painful journey that the story took to get there. 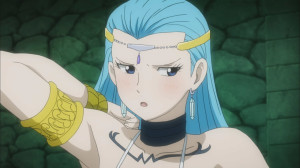 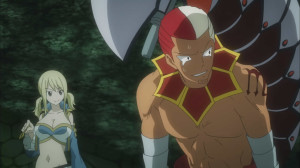 Lucy’s battle got a good decent amount of screen time, and some of the humor was pretty nice. The thing between Aquarius and Scorpio was definitely intriguing, and probably a lot more interesting than the actual battle that was happening.

At the end of these four episodes, which I saw in one sitting, I’m left scratching my head. Is Fairy Tail a good watch or not? I’m not sure how it answer that. Its a mixed bag, with some nice moments and some not so nice moments.

The series continues to oscillate between the good and the bad, in just about every episode so far.

Is Fairy Tail a decent, fun watch? Yeah it is. Is it as good as its ever been? No, not yet, but there’s random moments in each episode that give me hope that its getting there. Now that I’m done with school for the summer, I think we’ll see how this series goes week by week. 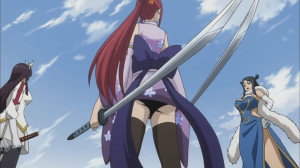 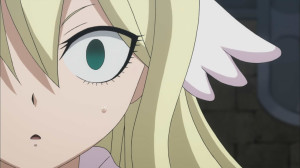 So now we’re getting back to the Grand Magic Games! This should be fun! See you next week!