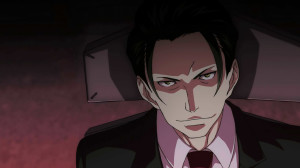 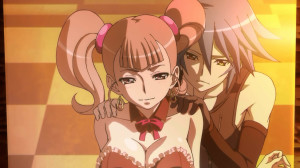 I have to give the series credit for taking its time in setting the stage. While of course I’ve been all for getting more action the payoff is looking pretty solid so far. Really all this was needed in order to get the main cast ready to go. It was bound to take time to show their capabilities and make them worthy of the responsibility they are being given. May have had some cliche moments along the way, but I’m looking forward to seeing where the story goes from here.

Really they needed to make clear what the stakes were and clearly define the actors. Finally I think I’ve got a good grasp on who’s on what side and their goals. If they just dove into fight after fight we really wouldn’t have a good base set up at this stage. Probably saved the budget too so probably win/win for the series in general XD. 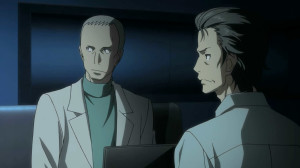 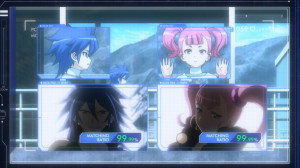 It is nice that the main group actually has a good grasp of what is going on. They know that the Macbeth Enterprise is connected to what is going on. Because they have Hana and Teppei they understand the Kiltgang far better than Kube himself does. Seems like they understand that Macbeth is being used though they are being prevented from actually just going and taking them out.

No doubt the Commander is taking a serious gamble in this current strategy. If they wanted to it would be possible to end this situation with a few well placed nukes. Of course the consequences are of the kind that would be scary to think about. Can understand being nervous about spreading intel to Salty Dog and being worried they might go nuke happy. It’s clear that organization isn’t tightly secured anyways so there would be risks all around. Though I’m not sure how far they can go just fighting off the Kiltgang. Long as they have a hold on Earth they can probably continue to attack far longer than Globe can defend. 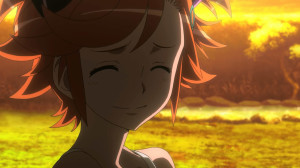 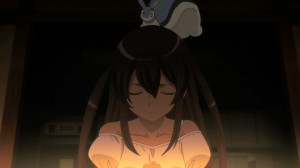 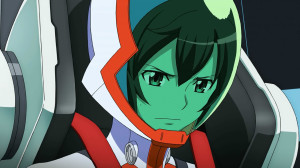 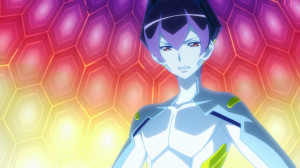 Of course a key thing is going to be the relationship of the four main characters. This episode really pushed that aspect forward more. Daichi pushing forward to try and protect what he cares about even through his fears. Teppei struggling with his own fears of losing himself when becoming a Kiltgang. Hana worrying for Daichi, but not really understanding Teppei’s fears as she tried to push him. And Akari trying to look after that group and trying to push Teppei, maybe wanting him to live up to her expectations.

Certainly feels like Daichi and Akari are the energetic duo of the group while Hana and Teppei are the ones that aren’t quite human. Though not to say that Daichi and Akari are normal either, but they are still genuine humans. I could understand Akari’s feelings though I felt the slap trope wasn’t needed here. But I guess for a crisis like this all one could do was trust in Teppei. It’s possible things wouldn’t turn out perfectly, but it’s better than the consequences of doing nothing.

Really I did feel for Teppei though. Who can really understand the fear of losing yourself in that manner? Not to mention if things went badly he might end up siding with the other side and then there’d be no hope for Earth at all. But I guess sometimes you need to test yourself. Teppei is rather hard on himself and has a serious lack of confidence. Props to Teppei in the end though for being willing to throw everything on the line to protect his friend. Pretty much said “goodbye immortality” and could have died right then and there. But he still took that risk and saved Daichi from being killed. In exchange for his mortality apparently got a livlaster of his own. Another male character given a gun of libido XD. 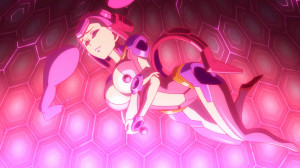 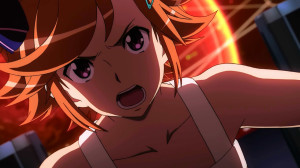 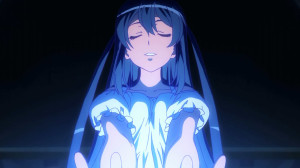 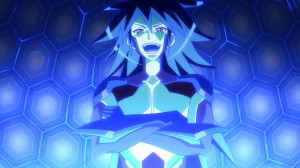 Also brings me to the question of what the heck is Pitz? I mean really what is that squirrel-like thing? There is something very weird about it. Has to be connected to Hana’s existence in some manner though I’m not exactly sure in what way. For whatever reason though it can detect their enemy and can predict when they will strike. A pretty handy ability to have to be sure. That’s one of the mysteries we actually did get.

The action itself was plenty fun. A very fluid fight and have to say I do enjoy the fights no matter how brief they are. The Earth Engine took one hell of a beating in that fight though. No wonder they can’t have action every week…don’t have the parts XD. The music and animation was pretty good and helped make it just fun to watch.

A very team focused effort though. Teppei helped take care of one enemy, Hana gave the power for Teppei to fight, and Akari assisted Daichi in taking out the remaining enemy. Curious to see how they continue to work together so everyone feels like part of the fighting force and not just Daichi who is heading out in the mech. 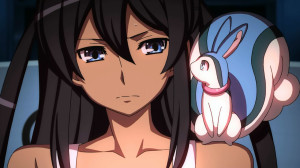 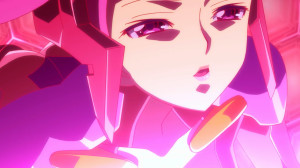 Well Daichi is now officially Captain Earth, and it’s still funny to say XD. This does feel like the real start for the series. Should be fun to have it take off from here. Since most of the mysteries are at least cleared up a little we can go into developing the characters and plot some more.
Score: A