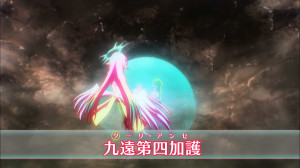 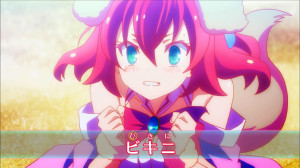 Kind of funny that despite the tragedy of Steph continuing this was a really good episode. This time the game only took an episode, but it was pretty entertaining from start to finish. The comedy was as good as always and it was pretty interesting watching how Blank managed to overcome Jibril and take the match. I guess it does show the potential of imanity when they are still being plenty underestimated.

Really this match was in Sora’s favor from the early portion. It didn’t seem like Jibril was playing with any tactic aside from exhausting her opponents. Sure monsters and such were dropped around, but it seemed more like she was playing without too much concern. While the whole time Sora was making his moves towards the end result. I do think he was just playing around in the mid-portion to get some nice fanservice. But even that fanservice had some meaning. It showed clearly how Sora could set up his plans and execute and how Jibril didn’t consider how to build on her moves. 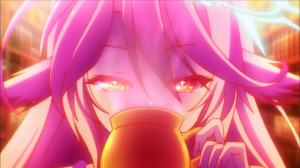 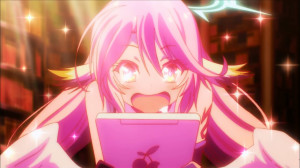 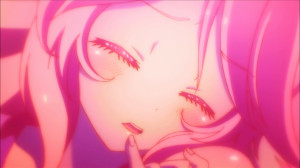 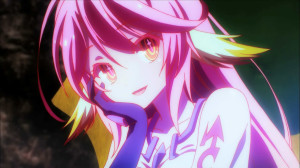 The personality for Jibril was really entertaining. Fun to watch this character who has her own really quirky traits. Most of the time had that very superior attitude while dealing with Sora. Certainly the attitude of someone who saw Imanity as a weak and incompetent race. Though she did win the whole library from their former King so it’s not like she didn’t have decent reasoning for being cocky.

The more interesting aspect for Jibril came when the unknown was involved. While she didn’t really respect the unknown so much, she was incredibly interested in it. Going into a silly drooling mode when it came to that stuff. It made her a pretty entertaining character and more likable when you have that to balance things out. She had a very interesting personality and will say the VA choice of Tamura, Yukari was a good one. Has voiced a few favorite characters so obviously no complaints there. 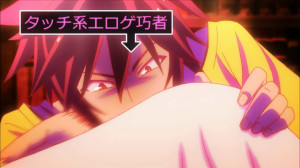 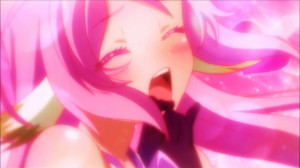 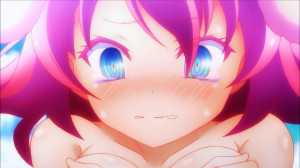 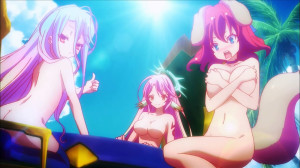 Yeah, there’s no way to avoid the fanservice aspects in this episode. It was hilarious how that whole beach segment played out with Sora in a sense getting the sensors set up for when he would eliminate all the girl’s clothing xD. I’m not sure how safe those scenes were. Pretty sure if I watched that scene with others in the area there would be some reactions…Still it was a hilarious highlight of the episode. Jibril really seemed into it all though Steph was as usual having some pretty extreme reactions to what was going on.

And of course the whole ‘body check’ segment was something else as well. Really sounded like I was watching something wrong with how Jibril was reacting to her wings being touched xD. I guess another gaming expertise comes into play for Sora there. It was also a helpful scene to confirm differences between Sora and Shiro compared to regular Imanity. While Imanity can’t use magic they do have spirits inside of them, but Sora and Shiro came from another world so they don’t have anything like that. 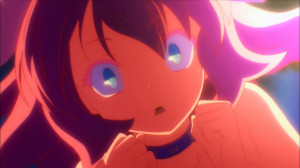 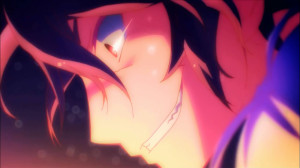 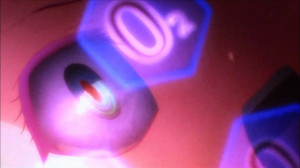 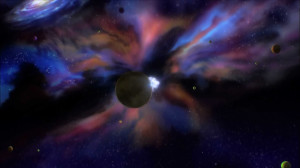 Will just say my condolences to Steph in this episode. Follows up right after her embarrassing situation last week and this time ends up in a dangerous nightmare. Gets her nether regions erased, stripped nude, chased by monsters, and suffers all the negative aspects of the move used to finish Jibril. It certainly seemed like the pain receptors were fully active during the suffocating portion, here’s hoping it was over fast enough though for her not to experience getting roasted alive…I suppose one positive is that she was thanked by the end and it’s not like Sora and Shiro were in 100% comfort during that scene either. Just because they knew what was going on doesn’t mean it was impossible to feel the effects.

This game was actually pretty brutal though. I mean the whole plan was good, but it was pretty crazy. I suppose after seeing that a nuke wasn’t going to have any impact on Jibril, Sora knew the only reasonable option was to use something that would kill just about any living being. I mean really if a hyper nova isn’t going to get the job done nothing would. With Jibril’s body it’s possible she could continue playing for days at a time. There was just a physical and mental limit if they just played to keep the game going. Still I mean, damn that was a pretty crazy way to go and win. 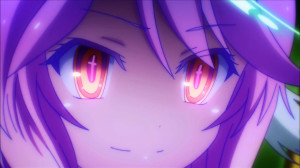 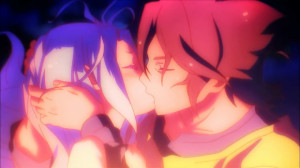 I’ll have to agree that Jibril pretty much set herself up for defeat. She knew a lot from all the books she’s been reading, but she didn’t really apply that knowledge. Also Sora was able to abuse some pretty basic science in order to defeat Jibril there. Destroying the layers of the planet to set things up, removing oxygen only so Jibril would incorrectly try to restore the air only to leave oxygen left, etc. It was a very tactical series of moves made in order to drop Jibril. She seemed to just be playing without any end game in mind. It’s that confidence that doomed her. She believed it was possible to end the game whenever she wanted and thus never took it seriously enough until it was too late.

That all lead up to of course the sibling ‘kiss’. At least this also had some very reasonable plot explanation. While to be fair I’m not sure how the whole breathing sharing works in reality, it seemed to make sense enough. Blank being two people is what gives them the biggest advantage over Jibril……and Steph. They could endure the situation for longer and had the best chance to survive. 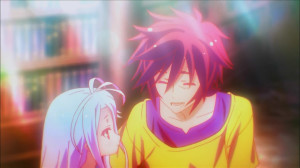 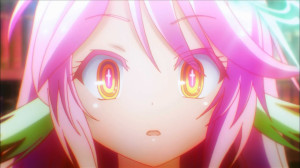 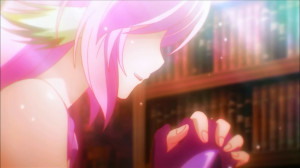 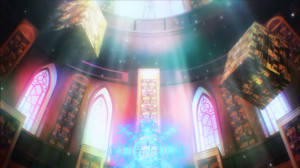 Have to say it’s impressive that Jibril took the whole losing thing really well. Guess it shows that while she can suffer prejudice like anyone else, she can also adjust her opinions when the facts change. No need for people to lock into opinions when information can change. She recognized that it was quite the gamble from Sora that she’d use the one word that would lead to what he wrote down being used. Though I think the one thing that really surprised her was the whole “being summoned by Tet” thing xD. When the god of the world makes a move like that you take notice.

The whole pledge scene really was quite beautiful in its own way. You can certainly tell that Flugel like Jibril have probably been looking for someone new to follow. They were a race created for war and when their master perished in the conflict and the rules changed they had to find something else to latch onto, thus knowledge. Here Jibril found someone willing to challenge the God of this world and someone who doesn’t respect the status quo. Even without magic Sora and Shiro will stand against the other races and don’t treat them like they are impossibly superior. It was just a really nice scene as a whole and think Jibril is going to make a great addition to that group. 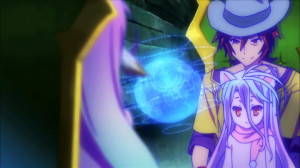 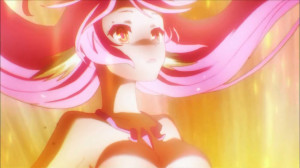 As a whole this was a real bounce back to quality for the series. Not that the last episode was horrible or anything. This was a good episode to again show the creativity and planning of Sora against what would normally be a superior opponent. It’s no wonder the Flugel had remained such a force even in this game based world. They had a very serious focus on knowledge and bodies that could survive most of what their opponent could think of in this shiritori game. Fun episode and can’t wait to see what additional favor Sora might add now that he’s beaten Jibril.
Score: A