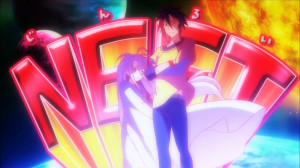 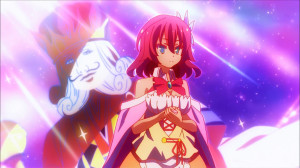 This is just one of those episodes where you need to accept that not every week will be outstanding. Not that it was a bad episode outright, just that some aspects of it dragged on a little bit. The bullying of Steph was an iffy thing for me. I mean sure there was the fanservice bonus to it, but I felt that everyone let it drag out too long.

Steph at some point should have pulled back and given up on it. Maybe you can blame a gambling instinct. That “one more” thinking that just maybe you’ll get lucky next time. Thus I still put most of the blame on this one on Sora and Shiro. I mean good that Sora finally helped clear things up by the end, but it took way too long for him to get there. Shiro as well was getting way to carried away in picking on Steph presumably out of jealousy and feeling threatened by her. Sure these three haven’t been around each other that long, but you’d think some level of appreciation would be built up by now. Feels a bit like they were all acting in an exaggerated way for too long. 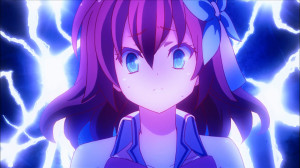 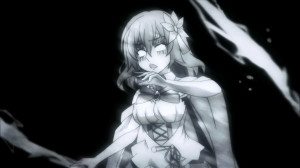 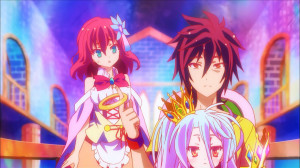 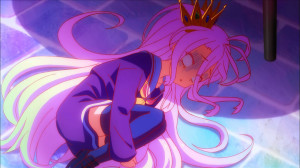 There was some fun moments in the episode though. I did get a laugh from the shock at hearing about how capable Steph can be in her own field. Really Steph is the type that would be doing amazing in this world. Good family wealth, attractive, good at general school subjects, excellent cook, and insane physical strength XD. Unfortunately for her she doesn’t have the same sense for games that Sora and Shiro have and that really makes all the difference in this world. And unfortunately that was the cause of her misfortune.

Really Steph was doing her best to try and keep that kingdom in one piece. If it seemed like Sora and Shiro weren’t doing anything then she wanted to get them moving to help the kingdom. She just didn’t realize they had been mixing their gaming in with researching.

And really too bad for Steph, but she’s actually better at handling the general royal duties than Sora and Shiro. Those two are damn good at games and they can pull some knowledge from their world. But at the same time if it comes down to working with people they can really only get things done by forcing them with the pledges. Steph is better at dealing with people in comparison and is a big reason that kingdom has been stabilizing after Sora and Shiro took over. There was barely any disputes once those two came out of their ‘room’. At least she got some appreciation by the end, I just wish it didn’t take all that trouble to get there. 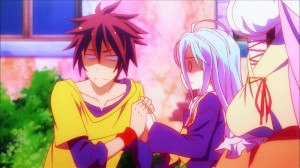 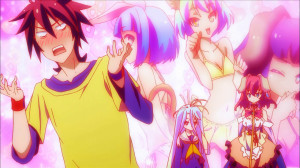 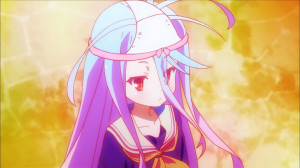 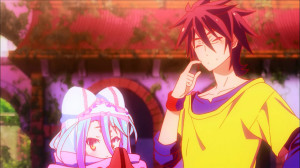 A fair point made by Sora at the end. It’s all about knowledge for winning these games. Imanity by this point forgot even what was their best attribute. Curiosity and searching for knowledge has always been a staple for the survival of humanity in fantasy worlds. Can get far because we go further than the other races and are always trying to improve. Steph kept on choosing games that either Sora and Shiro knew the tricks of or games they could bend the rules for. It’s all about the fine details and that’s something that Steph needs to work on.

I do feel that Shiro went too far in this one. You did get another look at how bad these two are when thrown out into the world and not having a chance to put up a front. Certainly I can see how Shiro heavily depends on Sora and can see his interest in trying to get girls. That in itself is troublesome since if he keeps gaining others then she’ll be left alone and may fall apart. But that doesn’t mean it was ok to be picking on Steph either. She does have good qualities and it’s not like she hasn’t tried to be kind to Shiro as well. Shiro will need to expand her horizons as well. In this world it will be ok for her to get along with others and gain friends. 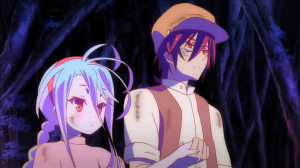 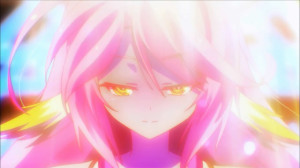 And yeah the end of the episode was something XD. That Flugel…I mean what was that!? That had to be the strangest sentence I’ve ever heard in an anime. It came out as something normal, but felt like this Flugel was throwing together bits of different languages into some strange sentence. Have to agree with Sora that it pretty much ruined the imposing atmosphere she was giving off. Can’t wait to see what kind of game will be played and how this is going to turn out. Should be at a different level than challenging Kurami who was just being backed by elf magic.
Score: A-