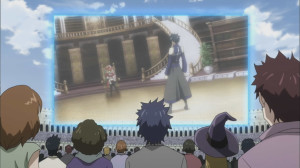 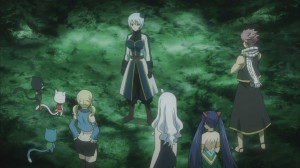 Every time I see Fairy Tail focus on Gray Fullbuster, I brace myself for disappointment. Its not that Gray is a bad character, far from it. Its more to do with the fact that his battles are hard to watch because of the pummeling he generally receives. The current arc, in particular, hasn’t been too kind to him. In terms of reliability, I’d say Gray pales in comparison to Natsu, who almost always delivers in a pinch.

What’s great to see is that both Gray and the series in general, take a step in the right direction, i.e getting back to being great. I won’t harp too much on the production this time, but I will say that it got much better than the monstrosity we saw last week. There were some parts where you could see how low the budget is still for this series (at least for now), and viewing flashbacks from the old series didn’t help. 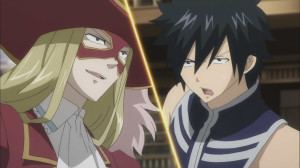 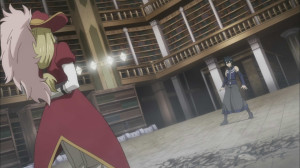 The important thing though, is that it was more or less competent animation and art where it mattered. The fight between Rufus and Gray looked like a huge step up in quality from what we’ve seen so far.

As for the battle itself, I wish we’d just focused on it for the entire episode, instead of going over to Natsu and company and seeing them act like idiots. More on that later, but I’d say despite the nice resolution of the battle between Gray and Rufus, it wasn’t easy to watch. 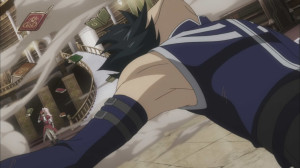 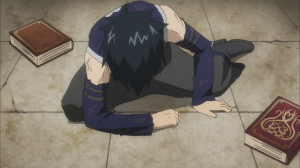 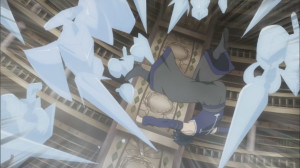 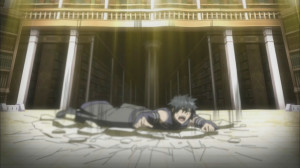 Its not a stretch to say that Gray got dominated and decimated for much of the battle. This is something that we seem to have been getting in this arc in particular. I honestly wish they’d keep Gray close in power levels to Natsu and Gajeel, but its definitely notable from this battle that Gray is a step below them.

Rufus’s power itself was pretty darn over powered. Memory Meld Magic was just shortcut for: “I can do any magic I see”. We’ve seen copy cat characters like that before, but Rufus took it a step farther by being able to combine what he “memorized” to create new magic. And to bring in the absurd, he could also just read about magic and use that too. 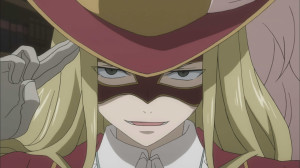 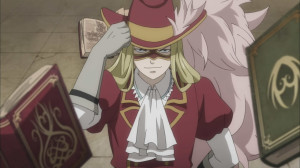 You’d think that Rufus would have a seriously unfair advantage in the library, and that the Grand Magic Games would prevent that sort of thing. And what kind of tournament has a “library area” for its final battle? Wouldn’t the books get destroyed during the battles? XD

And while most of the episode was another dose of “watch Gray get beat up”, It was gratifying to see that both Juvia and Mavis believed in him throughout. 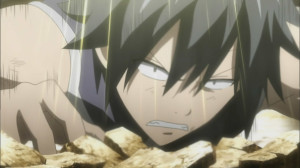 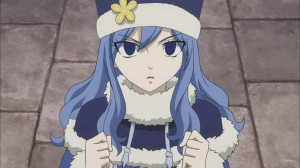 Juvia in particular, was great. I think Juvia herself was probably the only character that really believed that Gray would win, as most of the audience, Fairy Tail and even myself didn’t XD

Gray’s solution at the end wasn’t bad either. If Rufus uses his brain to memorize magic, then simply overload said memory. What I do wonder is why Gray didn’t go with that plan from the get go. Instead of rushing in without a plan and winging it like Natsu, I feel like Gray would benefit from using his head more. 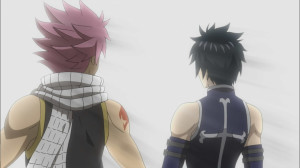 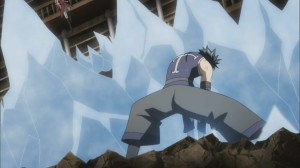 While it’s great to see that Natsu’s tenacity is rubbing off on Gray, I wish he’d find his own way to do things. The way Ice Magic works is more elegant than Natsu’s brash and unrefined Fire Dragon Slayer Magic.

And speaking of elegance, that last moment where Gray created a barrage of Ice swords and flung them at Rufus was darn cool (and well animated too). 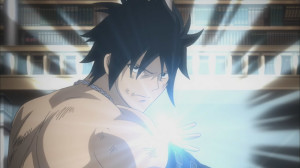 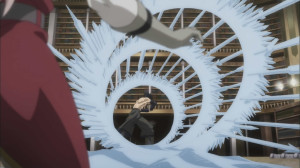 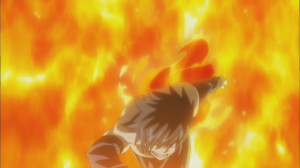 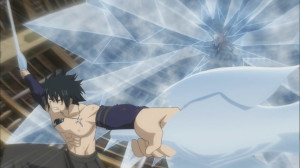 It was nice to see Ice Make Unlimited in action. When Rufus tried to counter with flames, It was pretty obvious that that marked the end.

The fact that Gray has always been Natsu’s rival, meant that he’s dealt with some of the most powerful fire magic in existence. It was nice to see Gray move right through the flames and finish off Rufus. 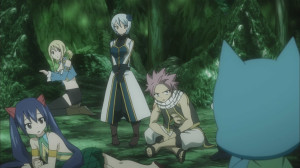 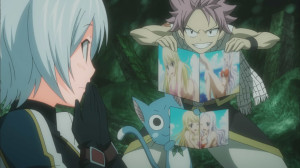 And while Gray’s fight was definitely a good time, I’m not sure I saw the point of what we saw with Natsu and company. It felt more like filler than anything, and of course, there was an excuse to throw some Lucy fanservice, and Mirajane Gar-ness XD 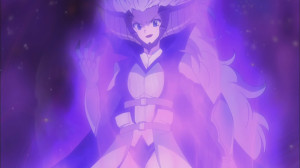 I didn’t think the comedy was bad, I just thought that the scene dragged on for too long and took away from from Gray’s battle.

I’ve noted before that Fairy Tail has generally great pacing, and while it wasn’t horrible, I did feel that it wasn’t the razor sharp stuff we’ve seen from the franchise before. I suspect that there was animation concerns and that’s why we got the Natsu dungeon scene, which could’ve been a lot shorter. That said, Its hard to argue with it when we got a nicely animated sequence for Gray’s final attack. 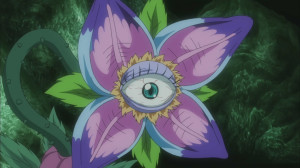 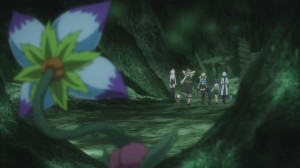 All of that said though, I’d still say that Fairy Tail was in an upswing this week. The art and animation remain a worry, especially after the stuff we saw from the last episode, but hopefully the momentum from this week carries forward. 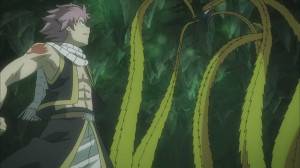 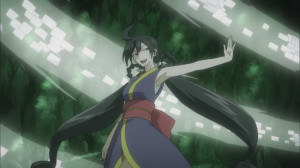 Seems like things will get serious over at Natsu’s side next week. See you all then!