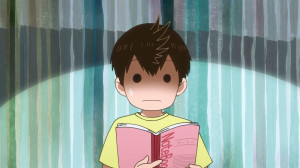 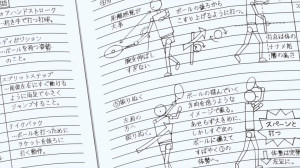 It’s steady progress in this series and I thought the fourth episode was pretty good overall. The little showdown against Takuma showed some good growth for Maruo and he’s taken a pretty decent step forward with his first official match on the horizon. All the progress in this episode though shows how far he still has to go when it comes to tennis. This episode was mostly focused just on him understanding the concept of returning a serve. Still, one thing I like about this series is that the little progress can feel substantial when done right.

The ‘match’ against Takuma wasn’t bad. It was fun watching Ei-chan slowly start to figure things out and make progress. Like anyone facing an elite serve like that panic would be hte initial reaction especially when you’ve never actually practiced receiving a serve. A very Ei-chan like reaction was turning to his notes and slowly figuring things out. That alone didn’t solve the problem for him, but shows what kind of personality he has and what he’ll turn to in order to find the answer. 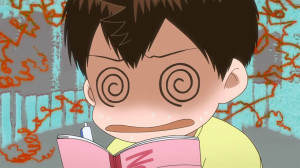 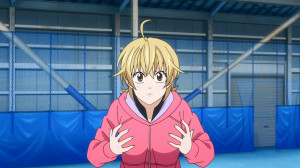 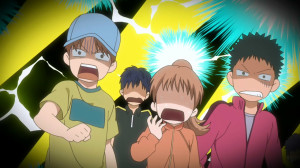 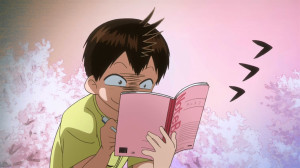 Certainly a key for the turn around was the top notch eyesight that Ei-chan has. The coach made a good point on that factor. Being able to actually follow the ball makes it a heck of a lot easier to return it. Can only imagine what a person who didn’t have that kind of eyesight would do when facing a fast serve like that and not having the experience. It’s all reflected in the notes. Actually taking the time to draw and take note of the path. Certainly more effort put into that than I would be able to do.

Though another pretty big factor to Ei-chan getting as close as he did was Natsu. I’m not sure if it’s good or not that the girl is pretty oblivious to the interest of others in her. It did help Ei-chan out a lot, but it also really annoyed Takuma who really stepped things up. The net effect was positive though since otherwise Maruo would have been running around in a panic. Honestly it’s fair for her to give him a hand since he is extremely new to tennis and the consequences to losing was supposed to be a punch.

Maybe in the end Takuma felt hitting Ei-chan with the ball was punishment enough XD. Though really I think he didn’t bother hitting him because he was pissed at having to get serious even for a moment. It wasn’t some easy serve this time, but rather one that he intended to win with. You have to wonder what exactly is holding Takuma back, but the series is bound to get there eventually. 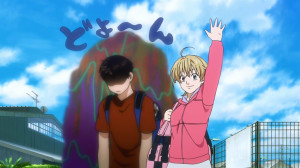 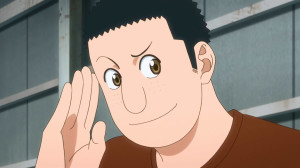 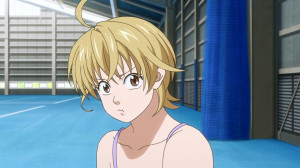 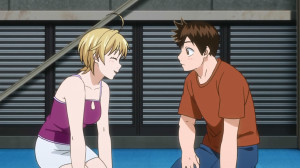 The effect of this showdown was actually pretty big. Otherwise I don’t think the coach would have noticed Ei-chan’s progress nearly as quickly. Has to be a reason he’s recommending someone so new to tennis to take part in a tournament. But even though this is a surprising turn of events it is a good thing for Ei-chan. When you have a goal to chase after then it’s a whole lot easier to get focused.

But with focus comes stress. The idea of being new and having to take on a seeded player is something not so easy to handle. Again it was a good thing that Natsu was around to give him a push…literally XD. It was a scene that helped calm Maruo down and focus on what he needs to be doing.

It was also a good little scene for Natsu herself. Rather than keeping her this big invincible player they do make her more relateable. While quite good she’s clearly working hard and there is all that pressure of being a top seed. You never know how a match will go until it happens and if you have a bad day….that pressure might sink you. 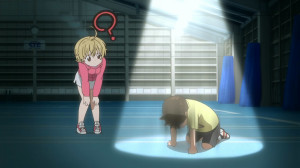 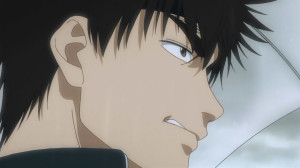 This might actually be my favorite episode so far for Baby Steps. It got into the tennis more although just returning serves and continued to push forward the Ei-chan and Natsu connection. The progress has been smooth so far, but now we’re going into an official match. Curious to hear what people might be expecting for Ei-chan’s debut. Should be a good episode at any rate.
Score: A- 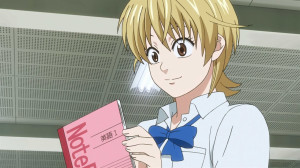 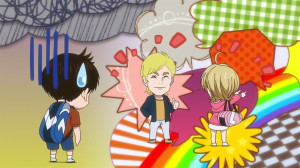 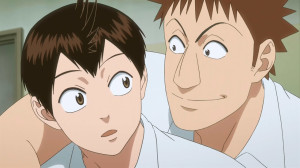 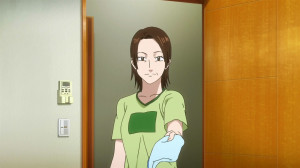 From here on I decided to add in a little section to tackle the differences between the source manga and anime. It won’t be spoiling anything past this episode, but rather just looking at some interesting differences that appear as we go.

I think the big thing in this episode was fleshing things out a little before the competition. A lot more time spent at Ei-chan’s school giving attention to characters that as important in the manga. After the scene where Natsu cheered up Maruo it was pretty much straight to the competition we saw in the preview for next week. There was still the scene with his mother, but nothing detailed in regards to school or where his grades currently are sitting.

Another additional scene was the English discussion with Ei-chan and Natsu. Makes sense when you consider that Natsu wants to go pro that she’ll need to work on her English. Also shows that while Ei-chan has good grasp of the technical aspects from class it’s another thing to use a language in practice. Certainly something many people can appreciate.

So far they haven’t really cut scenes, but rather have been working to supplement the material. No complaints here if they want to make the story flow smoother since what they added did fit nicely.