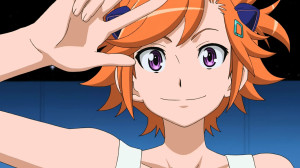 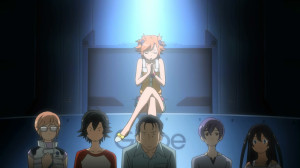 I will say that Akari is turning out to be a pretty entertaining character. Really it seems like the Earthling characters have a bit more punch to them than the seemingly alien characters like Teppei and Hana. Just some strong personalities at work there.

Was pretty fun watching this self-proclaimed magical girl troll the heck out of her father. In some cases I might not have liked her character, but honestly she seems pretty justified. Her parents pretty much got so absorbed in their careers that it ruined their marriage (or ruined their marriage then got job obsessed) and it lead to neglecting their daughter. Apparently she had a lot of time on her hands being able to develop skills as an expert hacker. Regardless there was just something fun about how she just makes everything a big production. 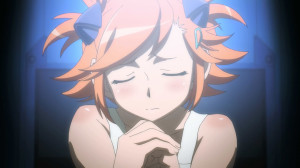 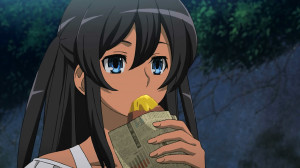 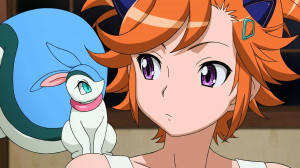 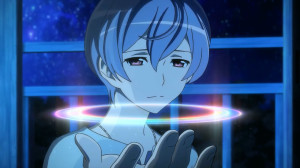 On a side note that’s a remarkably destroyed relationship with Akari’s parents. I mean they are so not on the same page that he takes care of a base on Earth and she goes into space XD. They really couldn’t have found a way to get further from each other. Maybe not out of communication but physical distance wise…it’s pretty impressive.

I just find the interactions between the characters pretty good so far. It’s clear on the romantic front they are lining up for Daichi x Hana, and Teppei x Akari. But at the same time there is some connection between everyone else. Teppei and Daichi have that friendship from the past that is still apparent. Hana and Akari as well are getting along pretty well though it’s not that developed.

But also you have some similarities with Akari/Daichi and Teppei/Hana. For Daichi and Akari their parents were good friends and can certainly relate to having parents that weren’t around growing up. And it’s a given with Teppei and Hana that they aren’t normal, with Hana apparently charging up the machine that would allow Teppei to head into space to support Daichi. 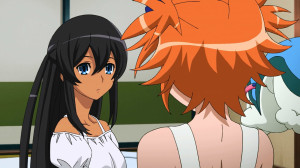 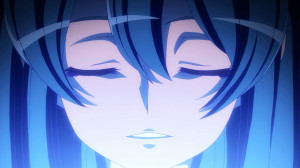 I think Hana deserves a bit of discussion here if only because of the impact she had at times. Clearly this girl has a power that everyone wants to get their hands on. Seems like she acted in a similar manner to those Kiltgang people in giving enough power for Teppei to materialize the way he did. And certainly the girl is remarkably lacking in common sense, with how she just wandered into the living room in the nude like that. Good luck on that restraint Daichi….

At this point I’m just iffy with Hana since she doesn’t feel very defined yet. A nice enough person, but I don’t know…she just feels very artificial at this point. Think it will take some more time and hope she’s not just the quiet songstress of the series. 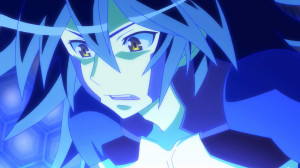 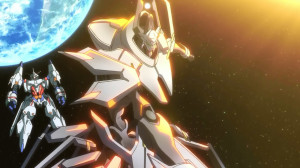 Teppei’s situation is worth noting as well. Clearly he’s the same kind of person as the ones attacking. Able to materialize in space in what apparently is their true form. It was good timing to say the least since Daichi wasn’t in fighting form there. Not a surprise now that Teppei was so worried about Daichi’s reaction to his ability. He’s very much on their side, but clearly not a normal human.

I almost felt bad for the Kiltgang guy in this attack. He was very focused on his goal and fighting really well there. But then he just gets sniped by Teppei once he lowered his guard. It’s like a friend you haven’ t seen showing up and shooting you…kind of surprising. Probably most curious though to see how Daichi and Teppei talk about the situation next episode. 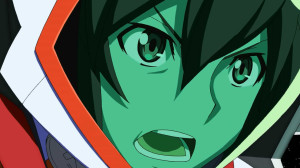 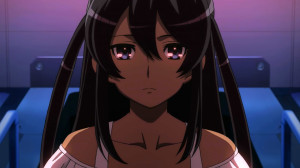 It wasn’t a bad move to actually tell Daichi about this Kiltgang being the one that killed his father. Did set up a good conflict though Daichi was clearly not going to be able to do anything with his unit not having been repaired yet. It was a good lure and one that Daichi couldn’t rationally ignore.

And also props to Salty Dog and the “high-tech” method of communication he has with his allies XD. Just something hilarious about actually working with a laser and paper cup trick. Probably not the best method of secret communication but still…rather hilarious. 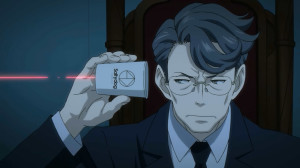 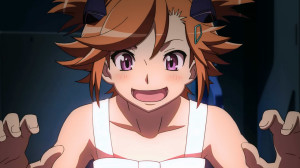 It wasn’t a bad third episode at all. I thought Hana’s insert song remains good and we’re slowly getting more information. I’m kind of hoping Hana’s character gets a chance to develop a bit since right now between the four kids she’s kind of feels the most off. Visually it’s still looking good so we should be in store for some nice action.
Score: B+