Nagi no Asukara is a series that people have loved to hate for some reason or the other. Its been the one series that’s carried over from Fall and gone through the Winter season, and with it, there have been detractors at every step. At first, it was the hate towards the series main character, and later the writer of the series herself Okada Mari has been called into question. Whether you agree with the rather loud voices that resound on the internet or not, one thing is clear; Nagi no Asukara is a very polarizing show. 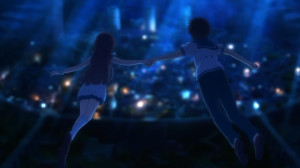 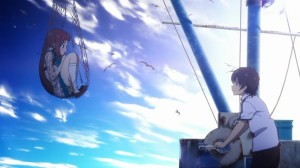 The series at its core, is a love story, and quite an interesting one at that. If you’ve ever seen Honey and Clover, or a dozen other series that seem to focus on unrequited feelings and love triangles that go on to grow into love “polygons” then you’ve got a pretty good idea of what to expect from Nagi no Asukara. The main cast of characters, which features middle schoolers goes through what can truly be called a gauntlet of emotions as they come to understand both themselves, their feelings for each other and deal with harsh realities of the world they live in.

And the world they live in isn’t your cookie cutter slice of life stuff either. Nagi no Asukara is actually more fantasy than slice of life, featuring a world that has both a surface dwellers and those that can live underwater in the sea. This fantastical setting is more than just a backdrop too, it actively contributes to creating events and situations that drive the main characters to truly go through things. Okada Mari (the writer people love to hate) uses the reality of this unique world, the clash of cultures between the surface and sea to great effect. 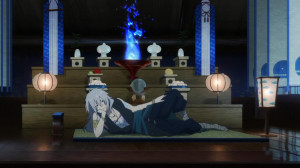 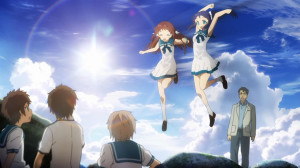 If there’s one thing that’s needed to enjoy this series, its patience. Its not the story is a slow build up, quite the contrary. The issue is that certain moves that Okada Mari-sensei makes throughout the story will baffle, confuse and even irritate certain viewers. The resolutions she’ll present will please some, and irritate others. I think what’s truly impressive about the writing in this series is that it will involve you in such a way that few series can, and the divergence of opinion then comes from how high your expectations are as a result.

Examining popular concerns, lets look at the series “main” protagonist, Hikari. Hikari starts out as a bit of unlikeable fellow. He’s definitely a bit possessive, quick to temper and can even be called a bit childish at times. Again, this is where the whole patience thing comes in. Hikari doesn’t make a great first impression, but his growth and maturation are one of the best things about Nagi no Asukara. 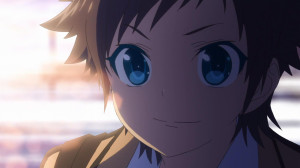 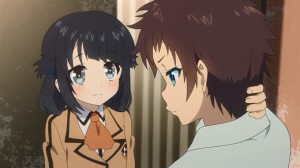 Hikari evolves from the jelous friend, to a man who learns how to deal with his feelings and face them. He changes from a selfish guy who wants to avert his eyes from reality, to one that moves forward and struggles to make life better for those he cares about. Hikari evolves, and he changes into one of the most likeable and admirable characters in the series.

Much of the series story mirrors this kind of idea, where certain moves will just baffle at first, but there’s a bit of a payoff waiting to happen. If anything, the series has quite the flare for the dramatic. It can often be argued that it gets too dramatic at times, often creating twists and status quo changes just for the sake of one upping itself. 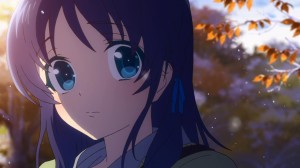 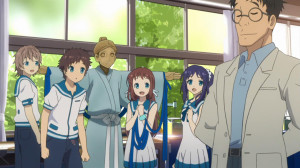 Is that a valid criticism? Its hard to say. Another big thing that happens about midway through the series, is a sort of time-skip. The timeskip happens just as the first major character arc of the main cast seems like its about to resolve. Its a curve ball that comes out of nowhere, and resets the board in a way. The status quo changes, and certain characters get added to what is an already complex web of love and pain.

Yet, its hard to say that Nagi no Asukara would be the series it is, without that curve ball, without those twists. Again, this is where personal tastes determine enjoyment. Personally, I found the time skip to be interesting, and I found the unfair situation that the characters are thrown in to be endearing. We’ve seen the Honey and Clover, slice of life version of this kind of story. In fact, I’ve seen similar stories a bunch of times, and Nagi no Asukara’s dramatic, intense and often times unexpected nature is what kept me engaged. It was something different, something I haven’t seen before. 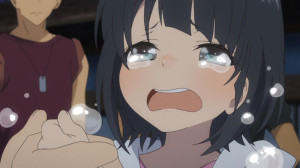 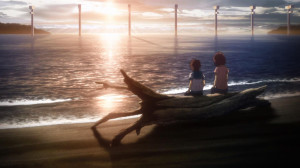 Nagi no Asukara made me feel uncomfortable at times, it made shed tears, and it made me smile as the characters I became attached to made progress. That really is all I personally want from entertainment, to make me feel, make me excited and invested. Nagi no Asukara does a fine job of that, I’d say.

The last peice of the puzzle then, is what happens when the series transitions from engaging to its climax and resolution. The diverse nature of the series pops up again, and again, for me personally, it works quite well. Nagi no Asukara is one of those rare series where most of the characters do end up finding happiness in some form. Most of the characters get someone to be with, and find some form of happiness. If its not outright shown, its at least implied. For me personally? That’s enough. 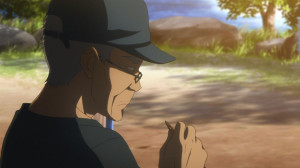 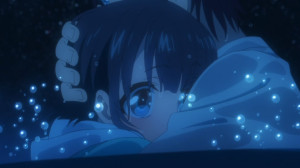 For some though, it won’t be, and the ending particular, despite how happy it is, will leave people craving more. There is no big moment where even the two main couple shares an embrace or really get that emotional moment that I’m sure quite a few viewers are expecting. Its surprising sure, especially since the series is all about being dramatic, especially when it comes to the sad bits. The happy moments, are by contrast, a lot more restrained and subdued.

Again, just seeing the characters not end up in the common “none are happy or loved” situation was enough to satisfy me. The series does a pretty decent job of making you guess whether the characters will end up with anyone at all, up till the last few episodes. Yet, the thoughts, the major theme, and the happiness is at least touched on fairly well. 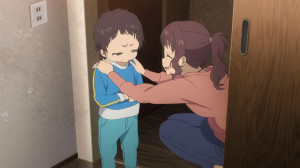 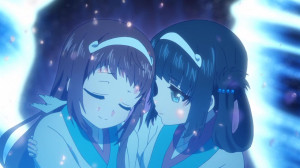 And while the story is something that will have different reactions, the production is less divisive. Simply put, P.A Works does what is their most beautiful and masterful work yet. The visuals are simply breathtaking, bursting with color, light and creating elaborate moods that few anime can reach. This is art direction and animation of the highest quality and caliber. Whether its the lighting in the series, the underwater village of Shishishiou or just one of the characters crying, everything is done masterfully. Not since Hyouka from Kyotoanimation have I seen a series that has gotten the micro and macro scenes right.

The Music and voice work don’t lag behind either, keeping consistent with the breathtaking visuals. Both OP/ED sets are exceedingly well done, fitting for the series and emotionally charged. The seiyuu of course, do a phenomenal job which is especially impressive given how much crying, screaming and emotional outbursts occur in this series alongside the more muted, quieter moments. 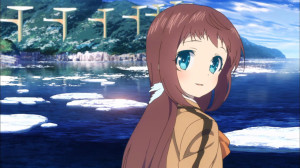 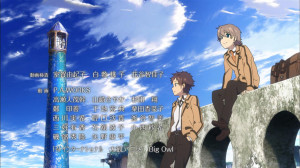 When it comes down to it, Nagi no Asukara is a difficult series to properly review or recommend. The enjoyment truly will vary from person to person, and it really depends on what you’re looking for and expecting. If you want a series that will grip you, involve you and make you feel a variety of emotions, then Nagi no Asukara handles that all quite well, while being one of the best looking series in these past two seasons. The series isn’t, however, going to give everyone what they want, and your expectations can truly change your enjoyment of the overall experience.

Despite that though, I myself feel that Nagi no Asukara was a strong series, and exceedingly well done. While I generally end the reviews with a “we award” line, in this rare case I’ll change it up a bit. For a truly memorable experience, and one that will stick with me for a good while, I award Nagi no Asukara with an A Grade.