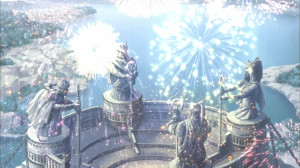 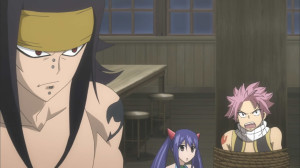 Fridays are definitely back to being memorable, as Fairy Tail continues to build on the momentum of not only the first episode, but the first series as well.

I really have missed this, the story and build up that Fairy Tail is just so darn good at. It takes real confidence, and the kind of confidence that only Mashima-sensei or Hunter X Hunter’s Togashi-sensei have, to just ignore action and have the characters and the plot take center stage. 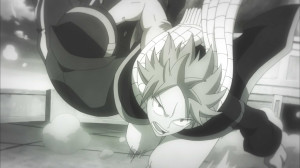 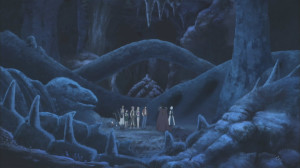 Some may argue that its the second episode, and we still haven’t gotten any major action yet, but I can say that I’ve just been hooked, glued to the screen at every second of the episode. More importantly, a ton of important questions are being answered, and the whole idea behind this arc… Which indeed may become the Eclipse arc before long, is becoming clearer.

I’ll admit, that as the episode started recapping stuff, I had nightmare flashbacks to when One Piece began doing the same thing. Of course, thankfully the recap was concise, quick and well done, and we got right into the thick of things following the OP. 41 seconds is really not bad as far as recaps go, and that’s a breath of fresh of air in the shounen space at least.

So what happened in this latest episode? The big thing I’d say, is we got the low down on what the Eclipse Project was. I admit, the answer was a lot more simpler and elegant than I was thinking; Time Travel. 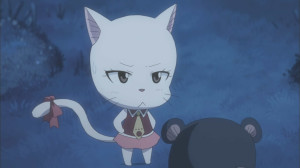 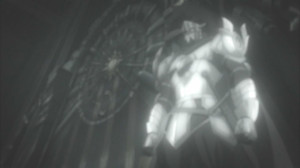 Now… Time Travel is a rather large can of worms for any story to open up. Time paradoxes, characters displayed through time e.t.c, and its something that Fairy Tail has largely avoided. We’ve had a time skip for sure, but actually traveling back in time changes a lot.

That said, however, I can’t even contain my excitement on the possibilities that time travel does bring to the story. The first thing is, of course, that Mashima-sensei has a great track record of handling time travel or at least time related stuff in both this series and his older manga, Groove Adventure Rave.

Secondly, I think the time travel thing is what’s going to provide a nice gateway for us as viewers to understand the core history and mythology of the world of Earthland. Zeref for example, was apparently mortal at one point before he turned immortal, and the story behind all of that would be pretty solid. 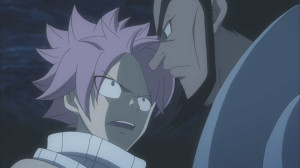 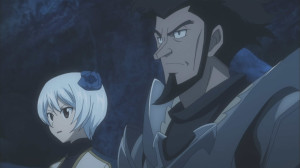 As for the plan by the Captain of the Cherry Blossom Holy Knights (what a mouthful!) Arcadios, its definitely a very risky plan. Going back time and killing Zeref before he gains immortality is okay in theory, but the ramifications would be extreme.

Its no stretch to say that Zeref has shaped the world as it is now. Most of our characters are some how related to Zeref in some way, I mean, Gray’s entire tragic backstory is based on Zeref’s creation deliora. If Zeref is destroyed, then Gray never loses his family, and never meets Ul and never trains to become a Mage, and never joins Fairy Tail e.t.c. 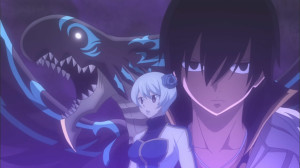 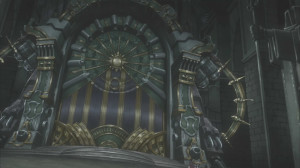 You get the idea, and Zeref seems to be related to our main man Natsu too, so who knows what impact Zeref has had on Natsu. With all of that in mind, If I were one of the people living in the present at Earthland, I’d be widely opposed to changing the past.

As Lucy rightly points out when she’s in captivity with Yukino, there’s no guarantee that the world will change to be the way you want it to. 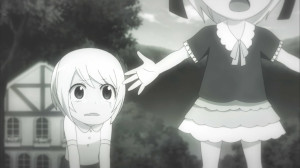 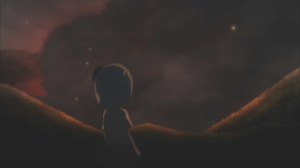 Speaking of Yukino, we get her whole backstory this week, and while its tragic, I can’t see her motivations as all together smart. The fact that her family was torn apart because of Zeref is tragic, but I’m not sure if eliminating Zeref will fix the fact that people can become fanatical and do horrible horrible things as a result. 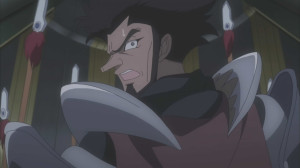 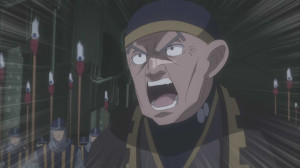 And of course, there are quite a few in the Royal Army who share my opinion on this, as Arcadios is labelled a traitor in this very episode. He’s sent to prison alongside Lucy and Yukino, with the other members of Fairy Tail unable to do anything because of the Eclipse Gate itself. 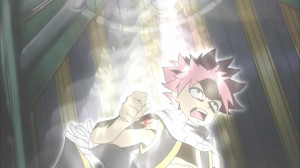 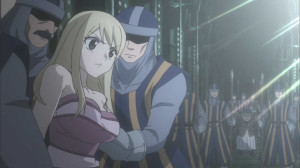 In retrospect, going with Arcadios wasn’t the best of ideas, especially when the guy admitted that he had tried to capture Lucy earlier.

With Lucy in captivity though, Natsu and co are told that if they win the Grand Magic Games, then the King might spare Lucy, since he’s quite fond of Fairy Tail. 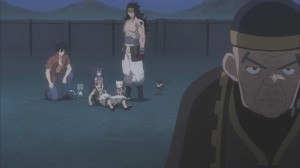 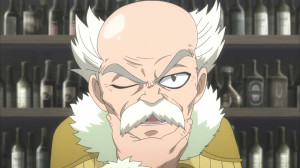 Of course, that sounds about as legit as a businessman in a dark alley. I really liked the way Makarov and the rest of Fairy Tail actually sat back and thought for a bit. It makes sense that Natsu would be roaring to go, but often times most of Fairy Tail has been pretty quick to rush into things.

When you’re dealing with a kingdom, however, it makes sense to be a bit more cautious. The eventual plan that Makarov goes with, is pretty solid I’d say. 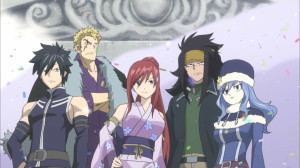 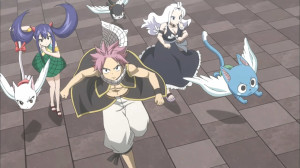 Laxus, Gray, Erza, Gajeel and Juvia head to the final of the Grand Magic games, while Natsu, Wendy, The Exceed Trio and Mirajane head to rescue Lucy behind the scenes.

At one point I was thinking the whole business with the Eclipse project would overshadow the finals of the Grand Magic games, but this setup lends to an added weight to the finals.

And MAN! That killer team of 2 S-Class Mages, One DragonSlayer and Gray and Juvia? That’s a team I’d definitely pay to see. 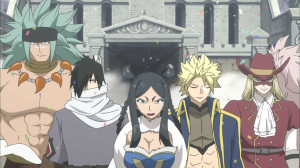 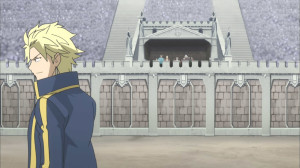 Speaking of teams, I think this week more or less confirmed what happened in Sabertooth last episode. Lector is definitely dead, as is the Guild Master. It’ll be interesting to see how Gajeel deals with Sting and Rogue?  I’d love to see Gajeel dish out some double hurt much like Natsu did in the last battle. 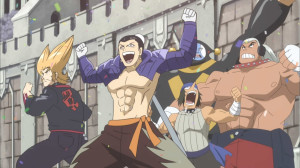 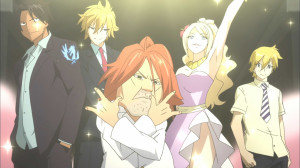 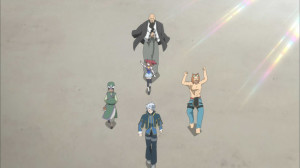 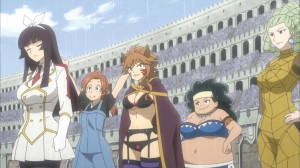 The little introduction of each team served to reacquaint us with everyone, but it felt less artificial than that bar scene from last week. It made sense, and it was good to see how things are going to go. More than anything, as Mavis stated, its a war on two fronts, and one that makes for great and exciting storytelling.

Things are definitely coming to a boil, and we’ll have to see where the Eclipse Project ends up leading us. Is that dark dreary landscape the current present changed? is it the future? Or maybe even the past? 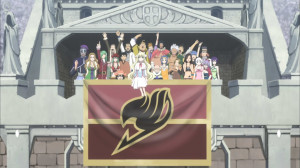 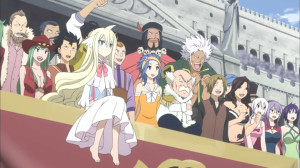 As everything does come to a boil, Its hard to not get excited. Fairy Tail is definitely firing on all cylinders. Its still unclear if the action can match the quality we saw from the last series, but given how well everything else is going, I’m pretty optimistic.

Also, the fact that Mavis and Makarov have nicknamed each other “Number One” and “Number Six” is both extremely cute and pretty hilarious! XD 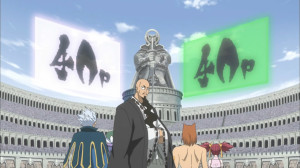 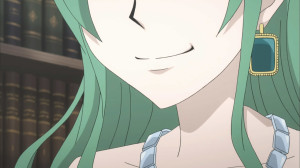 Okay, I’m excited to see who the Fairy Tail Tactician is, and whether she’s on team Rescue Lucy or  team Grand Magic games. See you all next week!