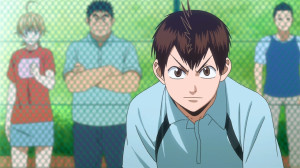 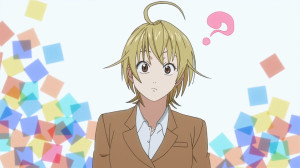 This was certainly one the series I was most looking forward to just because of source material reasons. Usually I’m not really into sports anime or manga. Maybe since most of them don’t really hit the sports I’m most interested in. But this is one series I think does a good job appealing to general people who may not have seen much tennis. Certainly nothing like watching a series from the perspective of a complete novice to get a better understanding of something.

Now going past the general statements, I thought this was a pretty solid first episode. It certainly did the job of introducing the main character and to get a feel for what kind of situation he’s walking into here. Honestly I feel that Maruo isn’t a bad main character from first impressions. But I’ll fully admit that while I’m going to avoid spoilers I might be unable to avoid impressions being colored so early warning now. So far we can pick out that he’s the type of person who has to work hard in order to achieve his goals. I can certainly relate to that. While I actually got pretty decent at playing music it was mostly because I practiced ton. It’s the same for Maruo and his notes. Continually goes over the material and thus gains an extremely good grasp of it. 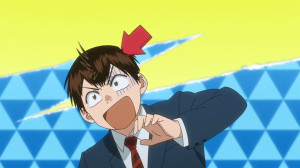 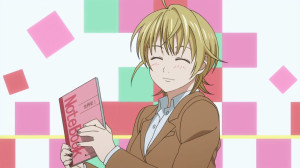 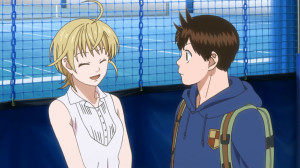 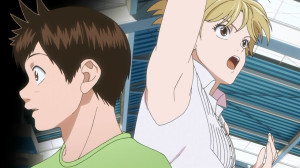 No shock that he’s shown some interest in popular girl Natsu. That personality and her cute looks really does save her from trouble early on. The complete mess that became Ei-chan’s notes was pretty bad. But anyways, this episode pretty much sets the baseline for Ei-chan’s character going forward. Obviously he’s not in the most impressive of shape since he’s been more focused on studies to this point. Still he did show some insane effort there that lead to him passing out. Most people would just pull back to what they could do even if it meant being shown up by a little kid. While that might be a stupid thing to do, it does show some competitiveness.

Whatever the result Natsu did make an impact in this episode. She really did plant some seeds in terms of pushing Ei-chan to think more. All the time focused on his studies and never really thinking of doing something because he loves to do it. Just been doing what’s expected of him and what he feels he should be doing. Can certainly wonder why she’d go ahead and share the secret of her goal, the fact is she did. Seeing someone like her chasing her dreams should have some impact. 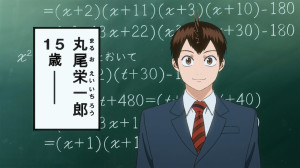 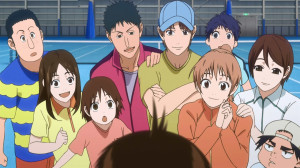 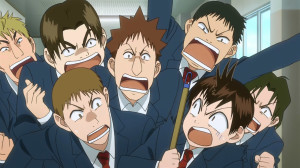 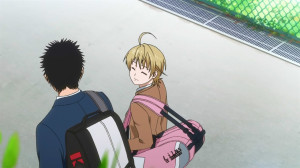 The story in this first episode really wasn’t that bad. We got to understand our main character and understand some of his quirks. Not much to say about his class since really the only one that stood out was his friend Kageyama. Someone that clearly understands what kind of odd personality Ei-chan has even though he’s presumably a lot more normal than him. Obviously the start of the episode is following this anime trend of showing an event much further on in a series before you get started. In this case it seemed odd since really did we need that? Isn’t it kind of obvious that in a tennis anime the main character is going to eventually compete in a tennis match?

The one thing I worried about going into this first episode was the voices. Honestly I still feel the voices for Maruo and Natsu aren’t quite what I imagined they’d be. I’d be open to what people think that are going into this series blind though. Maruo isn’t bad though and think it’s a reasonable voice for the character. Natsu I feel will take some getting used to. It’s not outright bad, but I could have imagined a few other VA’s that could have probably fit better. But give it a few episodes and I’m sure she’ll be fine.

Visually the series isn’t that amazing. Maybe a bit below average in some areas. But does feel like they’ve got a good base for the tennis scenes themselves. Maybe the style will just allow for more fluid movement which probably is more important for the series a a whole since there will be a lot of tennis being played here.

OP [Believe in yourself] by Mao Abe: (A) 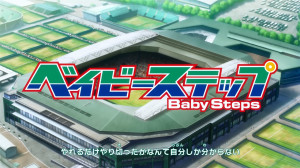 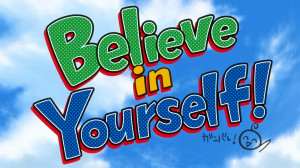 I’m definitely liking the OP overall. The song just has a lot of energy to it and since this is a sports series that definitely fits. Not much I can say that’s bad about it. The visuals clearly relfect what kind of show we’re getting into here, with just a lot of scenes of Maruo playing tennis in there. While at the same time doing a good job showing how large the overall cast is in terms of teammates, friends, opponents, etc. Really it doesn’t give much away that you couldn’t figure out from the summary while at the same time is pretty entertaining. A good combination to me. 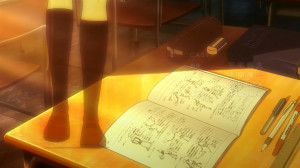 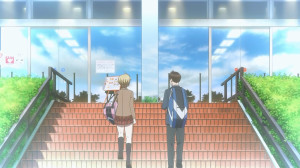 The ED was certainly a softer song that fits the general idea for an ED. And really I suppose for a series called Baby Steps they couldn’t resist a lot of showing Natsu just walking XD. A very Natsu-centric ED as a whole which is fine since she’s a main character in her own right. Just a nice little song with Natsu heading off to the club and meeting Ei-chan at the entrance. Nothing too outstanding, but just very solid. 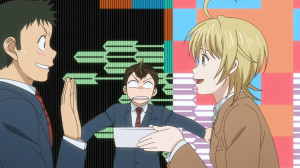 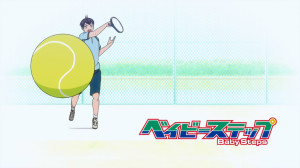 In the end this was the series I was looking forward to the most and it had a solid start. Was loyal to its material in terms of the content and so far seems like it will be a good series. First episode did its job of introducing us to the lead and the lead to the world of tennis. May not be the flashiest or most popular of the spring shows, but I’ll be enjoying talking about it.
Score: B+