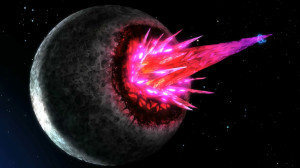 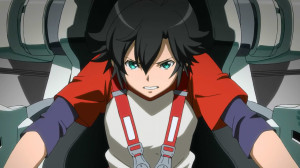 Have to say this was definitely a good first episode in my view. Really does combine elements of seriousness and the unbelievable into something that on first impression seems to work. Of course it doesn’t hurt that the series looks really good. I mean damn that mech coming together was pure awesome XD. Certainly an interesting way to assemble your unit. In some ways it makes sense to me since you need to get your pilot into space and ready to go in an instant. So they came up with this multi-step process to launch the pilot, assemble the mech and be ready to go. I’m all smiles at this point since it seems like this will be fun.

As a whole I liked the tone. They certainly played up the seriousness and the weight of Daichi’s history. They give you enough pieces that you can put together a lot of what’s happened leading up to the events in this episode but it doesn’t outright say everything. I’m looking forward to seeing more of the two kids that Daichi met in the past. The episode really seemed to try and be something big and so far I think it managed to do it. I certainly like when a series seems to just want to do something awesome and goes for it. 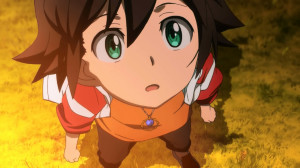 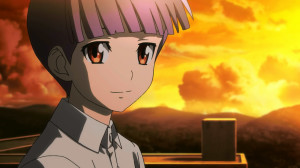 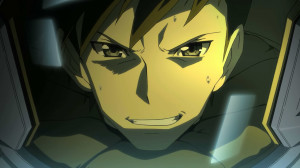 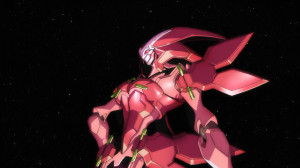 From first impressions Daichi seems to be a decent main character. Yeah, he gets shaken up from the unusual but that’s pretty normal. The things he’s running into and dealing with are so extreme that I don’t think anyone would be able to calmly just take everything in. Seems like a talented person that just has had a rough time since his father died. Living I presume with relatives who don’t exactly seem to support following in his father’s footsteps. Probably not a bad person just a bit overly serious.

Honestly it felt like a lot happened in this episode. Find out that Daichi’s father sacrificed himself to help keep the Earth safe, that Daichi ran into an interesting pair of kids around that time and now Daichi is being flung off into space to help protect the Earth himself. Certainly they had to get the pace going so they could end the episode with Daichi flung off into space ready to fight. While it requires one to just accept what is going on I was mostly just invested in what was unfolding. Looking forward to seeing just how Daichi does out there and just finding out more about what’s going on. 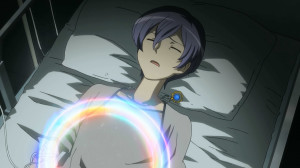 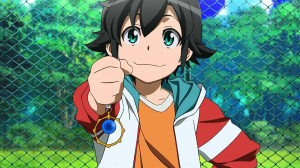 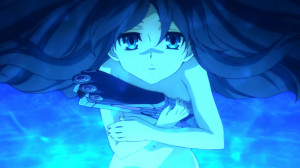 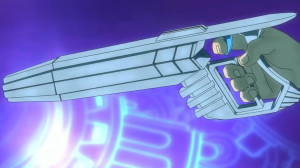 A lot of mysteries right now to try and sort through. Particularly curious about Teppei and that unknown girl that he and Daichi met. Have to give some wonder about a person who can create that kind of weird phenomenon. Absolutely no idea what that power is or what it’s supposed to do, but it looks pretty cool. Certainly probable that he’s not human considering the fact we saw the moon with a giant crystal thing sticking out of it. I think it’s safe to say aliens are part of the picture here XD.

Absolutely no idea what is up with a mysterious girl floating inside a giant bubble is all about. Certainly was hanging onto that Livlaster and eventually it made its way to Daichi at the end of the episode. A lot is going on, but I’m more than willing to stick it out and see exactly how it all works out.

Sometimes the best thing to do is slowly work in the characters and explain the setting while other times it’s fine to just jump into things and then start explaining as you go. They seem to be going more for the second which at least allows them to have a packed first episode. If you stop to think a student just went from visiting his father’s grave to suddenly being launched into space to fight aliens. But hey, it was something I could accept while watching so no complaints here XD. 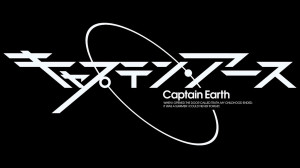 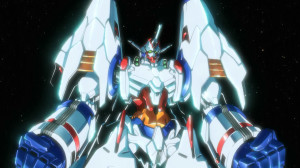 As far as first episodes go I think this was a really good one. A lot of stuff was thrown at us early, but I think it works. We get what kind of guy Daichi is and how he’s developed to this point. We also have a good idea who the main characters will be and the main antagonists. Still need to find out more about them, but that’s what we have all the other episodes for XD. It’s definitely key to make a good first impression since a bad one will have people dropping the series early and then it’s a long road to get people to come back. Captain Earth looks to be at worst a great looking series. We’ll see how good it ends up being in everything else as the series goes on.
Score: A