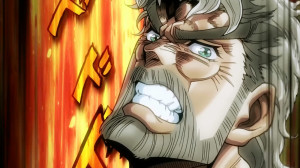 Certainly is nothing like the return of Jojo. The first season was definitely something that I just didn’t pay too much attention to when it started out. Honestly it just didn’t seem like something I’d get into so I let it sit until well into it’s later stages. Eventually I decided to check it out and was pretty hooked right until the end. Stardust Crusaders is just picking up where that series left off and felt like a perfect return for Jojo.

So the series has gone from England, to America, and now out to Japan for this third arc. Into the 1980s with a Jojo who certainly lives up to the idea of a delinquent. That’s a pretty out there outfit he’s wearing XD. Jotaro certainly has a pretty aggressive personality as well. Makes sense that this third Jojo is certainly unique as well. Will have to see how his character develops through this season, but at least he’s starting out pretty capable of taking care of himself. 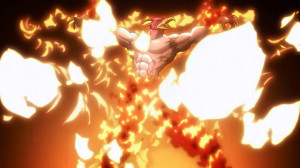 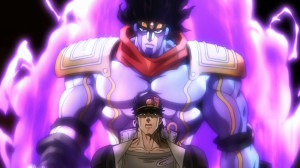 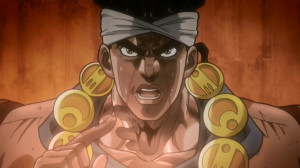 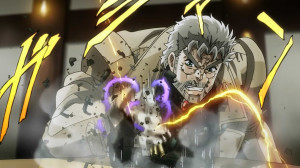 Seems like the ripple is going to fall back a bit and this time Stands are going to be the ability of choice. Though to be fair this is another ability that seems connected to a person’s biology so it’s not that far away, but just something different. In a sense kind of like the personas from the Persona series. They certainly seem capable of some incredible things from the fire we saw in this episode or just the shear power that Jotaro’s stand has. Makes sense anyways that the series would change things up.

The difference in Stands should be interesting. The fact that the return of Dio is connected to these things would seem to mean that Dio has gained some kind of ability like that on top of his already impressive vampire powers. Kind of funny that Joseph is the one with the Stand ability least connected to combat. Funny, but it’s not really a surprise. Even in his arc, Joseph was never really a powerhouse in terms of ability. He was always more of a trickster and strategist. So his Stand is more of a support power it seems, though pretty helpful in confirming what’s going on with Dio. 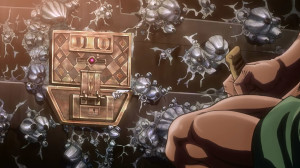 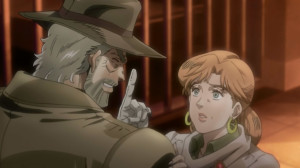 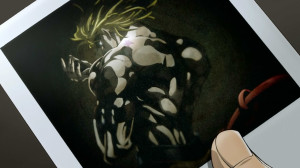 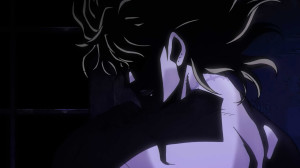 Naturally the big surprise is that Dio is back. There is a plot hole connected to this though. They clearly showed in the first arc that Erina escaped from the sinking ship in Dio’s coffin. Yet clearly we’ve seen that Dio escapes death with Jonathan’s body. Unless Dio just kept coffins laying about that makes no sense.

Regardless, Dio is back and you can imagine he’s up to no good. He’s had 4 years to hide out preparing for whatever he’s going to unleash on the world. I can’t imagine what kind of goal he has right now since his former rival is dead and the world has dramatically changed since his time. I do think it’s a sad fact that in the end Dio got what he wanted in the first arc. He did end up killing Jonathan and did end up taking his body. It may just be the remnants of the original Jojo, but a kind of unsettling situation.

This was pretty much an intro episode to get to know the cast and see familiar faces, so not too much has happened. There was a fun showdown between Avdol and Jotaro. Kind of shows the incredible potential of Jotaro to hold his own like that against someone who clearly has plenty of training. I’m sure we’ll get some good battles in this season considering the kind of powers the characters in this series will have. Still that first little encounter did show some serious power on both sides. Those flames were pretty flexible and not just capable of burning. While I’d also not like to be anyone who upsets Jotaro and has that monster coming after them. 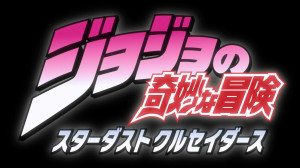 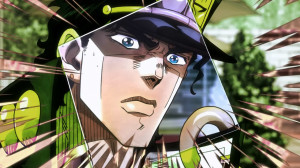 It was just nice to see old faces again. Joseph is still an entertaining guy and certainly his daughter Holly is very much the kind of child you’d expect from Joseph and Suzie Q. Looking forward to the coming episodes and glad to see more Jojo.
Score: A-