If you’ve been an avid watcher of Anime or reader of manga, then the name Hiromu Arakawa is a pretty big deal. A little franchise known as Full Metal Alchemist was created by her afterall. So after Full Metal Alchemist, and the recently great Full Metal Alchemist Brotherhood wrapped up, what was Arakawa-sensei’s next big thing? Surprisingly a very realistic, well done and thoroughly moving slice of life story about agricultural life in Japan. 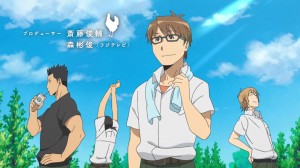 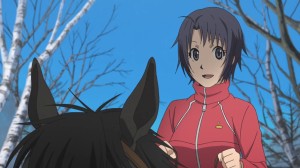 Huge divergence for sure, but the magical things that make Arakawa sensei’s works so amazing are all here. Great characters, great story and most of all, what is truly impressive is just how informative the series can be about life on a farm. Arawaka-sensei is known for having grown up on a farm herself, and her latest work, Gin no Saji (Silver Spoon), really shows the love and appreciation for that special way of life.

Gin no Saji tells the tale of Hachiken Yuugo, a 15 year old high school freshman who ends up going to the Agricultural High School of Ezono. Hachiken serves as both the main character of the series, and as our own window into the world of Ezono and farming life in general. Its an interesting mix, as the main character of the series is as new to everything as the audience is, and is therefore quite relatable. Far from just a cipher for the viewer to project themselves onto though, Hachiken’s character arc, his personal struggles and his general maturation throughout the two seasons of the anime are the highlight of the story. 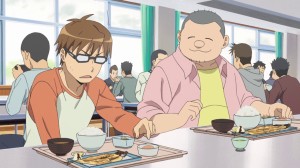 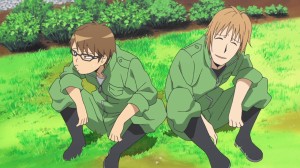 Hachiken has a very good reason for heading to a high school way out in the countryside, despite being pretty smart and good at studying. His meeting with his then to be crush Mikage,  meeting his various classmates, roommates and teachers changes him and for the better. There’s something for everyone here, as there’s a romance element to the series between Hachiken and Aki, there’s the spirit of friendship and cormadery, there’s family ties and relationships, going through high school and enjoying the good times there, and of course there’s the whole coming age of story as Hachiken grows into an adult and comes to terms with both himself and those around him. These common topics and stories are told through the unique lens of an agricultural setting and through the really amazing cast of characters.

At its heart, what makes any Arakawa-sensei work so amazing its deep characters, and just like Full Metal Alchemist, Gin no Saji features some of the most interesting and likable cast of characters. 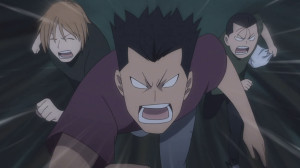 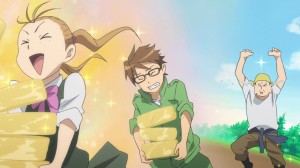 Its no stretch to call them some of the most believable cast of characters seen in the anime industry. You’ve got the extremely nice and cute Mikage, who’s really passionate about horses and views the world through that particular lens (and is a bit clueless when it comes to other things).

There’s the stoic, quiet but extremely dedicated and self-sufficient Ichiro Komaba, who dreams of both running his own farm and being a professional baseball player, there’s Shinnosuke Aikawa who dreams of being a vet but is uncomfortable around blood, there’s Tokiwa, who’s a bit of a “my own pace” guy who hates studying and quickly jumps to the wrong conclusions. The list goes on, and each character introduced is an added layer to the realism of the world, which continues to have characters that resemble real people inhabit it. Each character not only represents an interesting type of high school student, but also an interesting side of the farming world in general. 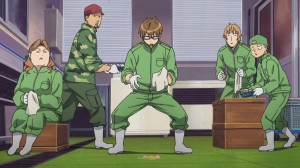 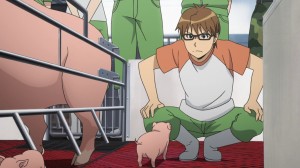 And while the heart of Gin no Saji is in its characters and their interactions with each other, the soul of the story is definitely the Agriculutral feild of Japan. Arakawa-sensei uses Gin no Saji as not only a character study, but also as a place to ask some truly interesting questions about some truly deep concepts relating to farming, whether its the relationship between a farmer and the animals he/she raises, or whether its more to do with the economic realities of agricultural world these days, its all handeled with a tender care that only someone truly familiar with the subject matter could do.

So yes, Arakawa-sensei does great work with story, characters, world building, a few episodes of either Full Metal Alchemist series could tell you that, but is this a series that’s for those that aren’t that interested in Farming and what not? Well… Yes, and then yes again. The beauty of Gin no Saji is just how immserive, interesting and lovable the series is to those who have no idea about Farming, Agirculture and that whole feild that really is another world in and of itself. 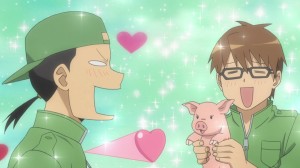 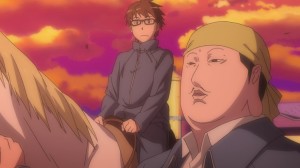 The joy of the series is in its characters for sure, but its also a story that can only be told in the setting that it’s set in. If you’re someone who’s even a remote fan of good character stories, romance, slice of life or just generally good entertainment, then you’d be doing yourself a disservice in not watching Gin no Saji.

Bringing Arakawa-sensei’s amazing world and characters this time is A-1 Pictures (not Studio Bones). The change is hardly noticeable though, and A-1 Pictures actually does a great job with the adaption of the story, and keeps things extremely close to the source material (an extremely wise move). The animation is done exceedingly well, with a consistent quality throughout. Gin no Saji isn’t a show that begs for a lot of flashey animation, and A-1 Pictures wisely choses to focus on highlighting the characters, their expressions and providing some really lush, green and beautiful backdrops for the story. 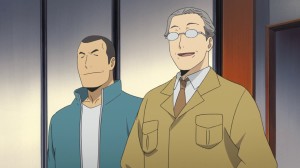 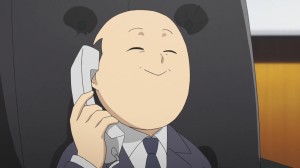 From a production stand point, its really great to see A-1 Pictures nail every aspect of the adaption process this time around. The point at which the second season ends (bringing the episode total to 22), is also pretty organic and actually completes what is a pretty strong character arc for Hachiken. Its hard to say whether we’ll get a third season at some point, but again, the story stops at a nice enough point that you’re not left feeling painfully cheated out of an ending. And of course, if you’re hungry for more, its easy to jump right into the manga (and that’s something that can rarely be said about a lot of series).

The seiyuu work is also, AMAZING. Ryohei Kimura totally kills at as Hachiken Yugo. Marie Miyake (Aki), Tooru Sakurai (Ichiro), Nobunaga Shimazaki (Aikawa), Ayahi Takagaki (Tamako) and really the entire seiyuu cast bring their characters to life with exemplary performances. I probably sound like a broken record at this point, but it really is easy to take for granted just how amazing the voice work is for a great series like this one. If its done right, you hardly notice that the characters are actually being VOICED by someone. Gin no Saji is another series where the voice work truly merges into the characters themselves, becoming an organic and natural part of them. 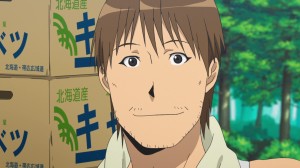 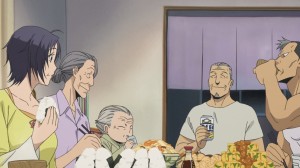 And sound wise, the music for the show is also extremely well done. Both OP/ED sets really have a very country-esque feeling to them, but it also feels distinctly japanese, adding to a unique flavor to the series as a whole. The music soundtrack itself is very upbeat, and uplifting and definitely gives that feeling of being the calm, quiet and cheerful countryside, highly complimenting the pretty visuals of the series.

At the end of the day, its hard to not marvel at the genius that is Hiromu Arakawa. Going into a complete different genre, tackling completely different subject matter, and doing it better than most is just breathtaking to see. Any fan of Full Metal Alchemist would’ve probably asked themselves, can Arakawa-sensei ever make something this awesome again? And the answer is yes, but instead of making another fantasy series, Arawaka-sensei made a slice of life show that is unmatched in quality to anything else. A-1 Productions making an excellent adaption only brings the franchise even further into the spot light. 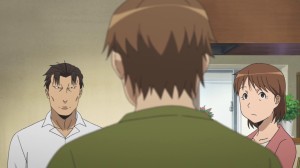 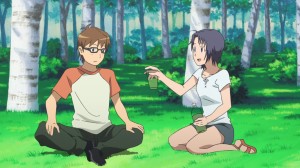 And if nothing else, its just great to say that a slice of life anime about farming is one of the best shows of the 2013-2014 period. We award Gin no Saji with an A+ grade for just being simply amazing.