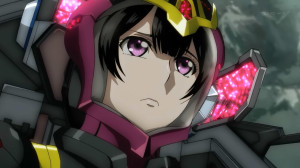 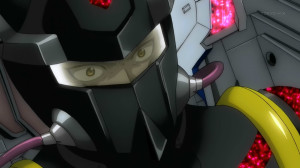 I have to say props to this series. I honestly went into this episode with certain expectations about how things were going to go and yet was still surprised. Honestly, they built everything up with the feeling that it could be rushed into a conclusion within a single season. Instead they pull the twist right at the end there and give us a “to be continued.” Never have I been happier to be wrong and see that at the end of an episode XD. Definitely a nice move by Buddy Complex there.

And now we’ve reached the point I was worried about…trying to figure out time travel! It’s really a tricky bit of business that’s for sure. It’s kind of remarkable honestly that Aoba figured things out that Hina was the one in a time loop. Since honestly…the guy is pretty dense. It’s a pretty major accomplishment for him to figure something like that out XD. Much as I’d like to avoid a time travel based discussion, this seems like an occasion where you just can’t avoid it. 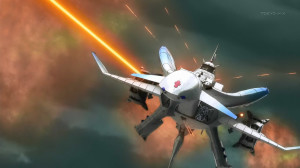 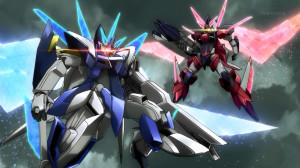 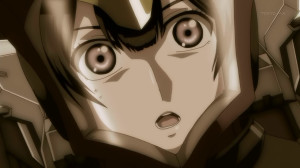 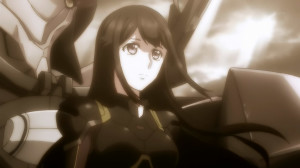 Aoba pretty much put the time loop perfectly on his own here. The major time traveler wasn’t him really, but rather Hina. Aoba was thrown 70 years into the future and that’s a major development no doubt about that. But Hina was the one stuck in a loop. She’d save Aoba go forward to her childhood, grow up and then go back to save Aoba again. As things stood that loop wasn’t going to be broken. The normal course of events no doubt was Dio stopping Aoba. He usually tried to draw the line when it comes to his obsession with Hina. 9 times out of 10 Dio makes that step to stop Aoba from stopping Hina and thus the time loop is established. I presume from what we heard that Aoba did understand what was happening pretty rapidly once he saw Hina heading for the time tunnel (I don’t know if they mirrored my label before, but if not I called it XD). Sadly normally Dio would hold him up enough.

This time however everything changed. The key difference has to be the coupling with SkyKnight and FireBrand. I was lost trying to figure out that scene where we saw a version of the mech shattering after the coupling. From looking at various opinions I have to think it’s a representation of the standard time loop. Normally that coupling fails. That of course leads to no memory sharing and thus no conversation between Aoba and Dio before the battle. Dio needed that understanding in order to be willing and accepting of Aoba doing something reckless like saving Hina from that time loop. A nice way to change things, that only really makes sense in hindsight.

Even changing that path wouldn’t matter if they just let Bizon go and try to kill Aoba. Therefore they went ahead and kicked his ass beforehand. The big difference between episode 1 and now is that they have more firepower and Hina’s mech isn’t worn down from months if not a year of no maintenance. The immediate results of this is great of course. Hina is safe! Honestly going into this episode the thing I was dreading the most was Hina being stuck in a perpetual hell. I really would have gone from enjoying to hating the series if it just had that kind of eternal tragic tone. She develops as a character, gets practically betrayed by her people, and her one action to return the trust she’d been given puts her into a time loop that she can’t escape from. That would just suck. 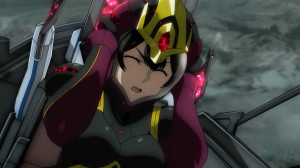 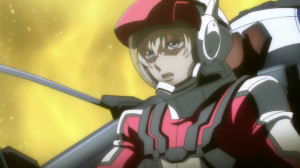 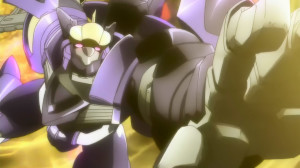 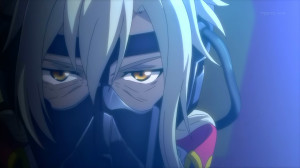 Of course the result is that something else happens entirely. Dio’s understanding of Aoba has assist in helping Hina out. That leads to them deciding to just beat Bizon before he can go back in time. Lot easier to own a unit that is outnumbered than fighting with a damaged unit that badly needs maintenance like Hina did in episode 1. That certainly helps avoiding the danger of Bizon going back and actually killing Aoba which would cause all sorts of consequences I care not think about.

But the result of that is pretty key as well. Bizon doesn’t seem to die in that instance. He still gets through the time tunnel, just without a mech. One would assume he turns up in a different time than he would have if he had gone through as normal. If at that point Aoba was already in the future or something he might have just gone ahead and founded the Zogilia Empire. This is just a cool development to me really. When I first saw it, I was kind of laughing from how fun the upcoming season was going to be. I mean come on, Bizon pretty much goes turns into a mix of Darth Vader and the Emperor from Star Wars here. Builds up this massive empire for the sole purpose…of killing Aoba! That’s some amazing NTR rage right there.

Honestly Bizon’s descent into madness has been fun to watch. He started out as a nice guy who looked out for his team and tried to fight a relatively clean war (hold up on civilian casualties and such). Now he seems to have used his knowledge to just build up this war just so he can kill Aoba as revenge for ‘stealing’ Hina from him. Really he turned into a possessive jerk in a hurry. Obviously didn’t care that Hina was being brainwashed or that he was forcing the coupling on her, she belonged to him and that was that. 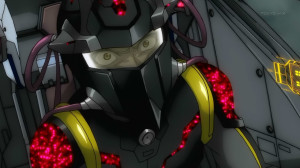 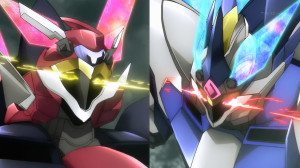 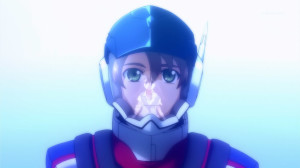 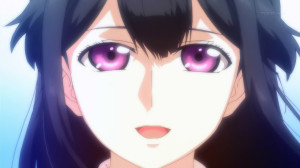 The battle itself was a lot of fun. I didn’t expect the version 2s to arrive for Aoba and Dio. But it’s a good thing they did since they needed top notch coupling mechs to match up against Bizon and Hina. The battle was surprisingly less about action for a major conflict than the characters which I was ok with. It was enjoyable seeing how the story was developing and seeing expectations being met but also completely undone. The series had me at the scene with Hina going back in time and seeing how things normally went. I thought “damn, so that’s how it’s going to be.” But then they spin it all around and things get a lot more interesting XD.

Honestly I had to laugh with enjoyment again with the Hina coupling. You knew it was possible the moment we saw how ‘compatible’ Hina was with the base wavelength. Something just enjoyable about how they decided to do this. First I thought they felt that having Hina accept the proposal would be too much to actually hear it, but they practically created a ‘newtype’ moment first for it XD. This episode definitely was high on the fun factor. Just showing the insane potential with Aoba and Hina fighting together. Maybe a subtle way to say the difference between the bond of friends and a budding romantic relationship. Regardless it was pretty flashy and a very Buddy Complex way of cementing the NTR against Bizon. 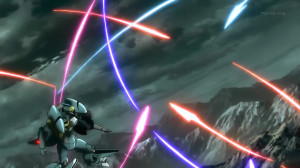 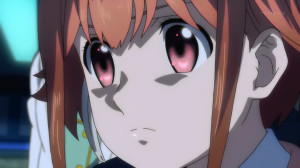 As a whole I really enjoyed the episode. Obviously doesn’t have a big last episode feel because it’s part of a two-season thing. But it does leave off on a good point. Hina has now been saved which really was a big thing for Aoba. Of course there is going to be complications, but I’m sure Aoba and Dio will stand pretty firm in regards to supporting Hina. What she does going forward will be interesting though. As will the reign of Emperor Bizon XD. I’m looking forward to what is next for Buddy Complex though when is up in the air.
Score: A+ 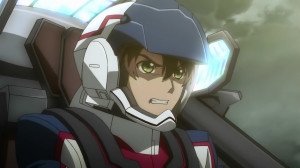 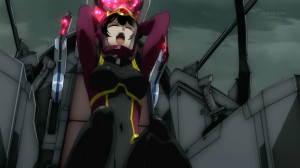 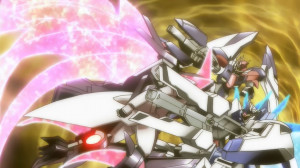 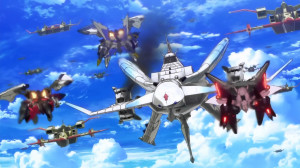 This honestly has been an entertaining ride. I’m sure it hasn’t gotten the attention it probably should because of how it can be interpreted. The terminology definitely lead to interesting interpretations. And certainly it is a series that does tread on some familiar ground in a lot of ways. A good amount of scenes and situations are pretty much lifted from Gundam Seed to be used in this series. And of course depending on how people looked back on that show it could affect how much interest there was in Buddy Complex.

Personally I really started to enjoy it once I got a couple episodes in. The time travel aspect got more and more interesting as the series went along. Early on it just seemed like a simple case of Aoba getting thrown into the future and maybe Hina just vanishing into thin air. That had its own tragedy to it of course, but things did get more complicated. The time loop business centering around Hina did add some pressure to things. It was fine to see the series unfold and witness how exactly this time loop got setup, but I did want to see a solution coming out of it. How they did it worked alright by me.

The action was enjoyable throughout so I rarely had a problem there. As a whole this was a fun first part to the series. I think as a whole the series just seemed to click for me. It had the some good action and did spend the time to develop the cast. Now things are set for them to hopefully really escalate things. Bizon is on the literal warpath and now both sides are likely to have coupling mechs which will only make it tougher. And seems probable we’ll have a…coupling competition going on with Dio and Hina possibly XD. Some things to consider going forward at least.