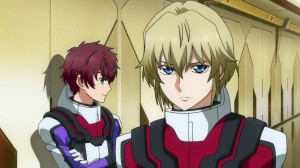 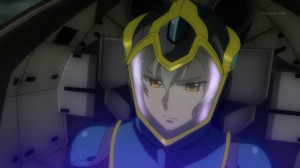 Well this episode was pretty much everything I expected and I have no complaints about that. This really covered the “enemies stuck together on an island” situation pretty much to the letter. Was a good chance for Aoba and Hina to talk about things and really kickstart the development for Hina that will eventually lead her to willingly go back in time with the goal of protecting Aoba from Bizon. Something to be said when cliche’s are done properly and this episode definitely managed that. I enjoyed it from start to finish and am curious to see how the next episodes unfold moving towards the conclusion.

While the entire episode wasn’t focused on Aoba and Hina the majority of it was which was nice. We got enough from the other scenes to get an understanding of the characters. Dio continuing his development by really pushing to find Aoba who much as he wouldn’t admit is a friend he wouldn’t want to lose. Also got some confirmation that Bizon and Hina have known each other since they were kids. So pretty much Aoba is going to be going and NTRing a childhood friend situation. Does give some insight as to why Bizon will go so far over the edge when Hina eventually picks Aoba over him. Glad that Dio didn’t have to break the rules to go after Aoba and the captain pretty much let them go after they cleared the storm. 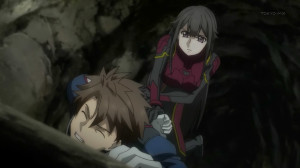 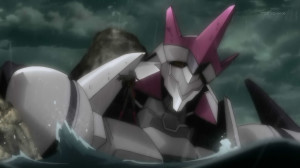 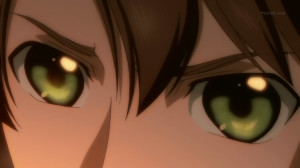 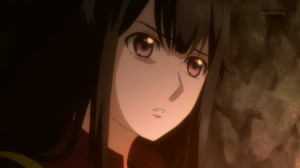 The time on the island itself was handled pretty well. Not really all that surprising that their units weren’t exactly working after plummeting all that way and in one case being sunk underwater. Things unfolded pretty much as you would expect. Hina did a pretty good job kicking Aoba’s ass and capturing him leading to them having plenty of time to chat. This really was a needed chance for Aoba to explain where he was coming from even if the first reaction from Hina understandably was shutting down his misunderstanding.

It’s rather impressive in some ways that Aoba seemingly hasn’t clued in on the whole time loop thing. I mean sure maybe it’s tougher when you are in a situation and maybe he just never watched many time based movies or series, but still it’s a bit hard to believe. I can somewhat get the reasoning. If you made him understand what was going on and realize he needs to perpetuate the cycle then any actions made to further that might make him look like a manipulative jerk. Need to have him growing closer to Hina be more natural so he’s not made out to be like that. At least a guy who is somewhat foolish is better than someone messing with a girl in order to make sure he’s kept alive in the future. 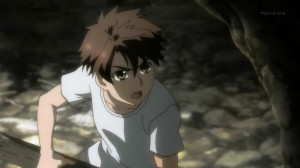 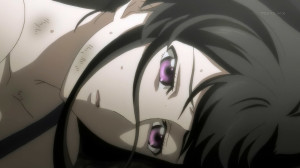 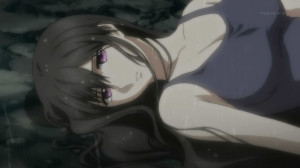 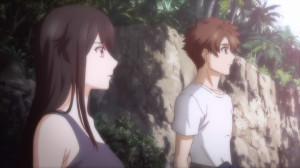 The episode did it’s job though in starting to change Hina’s thoughts towards Aoba. Starts off by saving her from drowning, helps her dig their way to safety, and then saves her life again. Actually surprising that she almost drowns twice in the episode though neither time was her fault. On top of that Aoba actually lets her call for help instead of either leaving her on her own or taking her prisoner which she planned to do earlier. While obviously it’d be nice to have them together Aoba isn’t that naive. She wouldn’t just be peacefully welcome nor would she be eager to be there considering the different sides they are on. It was a bit risky to let her call for help since if the timing was bad they could have had a battle right then and there.

I thought Aoba was pretty likable in this episode. He had some attitude when she captured him after being saved, did get frustrated when realizing this wasn’t the Hina he knew and yet did calmly tell her his story. I just liked the interactions between them. The cave in did give them good reason to cooperate and Aoba showed his determination. Hina did a good job handling herself overall. Quickly realized how dire their situation was when the cave in happened and how the fire going out saved some of their air. She certainly had the option of just killing Aoba to save some oxygen which I’m glad she didn’t take XD.

Even if she feels like he’s mistaking her for a different person it probably does have a pretty strong impact to see someone desperately struggling to save your life. She might not be willing to quit the military or anything, but it’s going to be hard to think of Aoba as an enemy that she has to fight. That being the one thing I’m worried about going forward now. Hina already had the spotlight on her when she didn’t actually do anything. Now she’s going to honestly be hiding something. That’s only going to intensify the pressure she’s under and might even start causing her friends to have their doubts. Bizon at the very least should be able to tell that something happened. 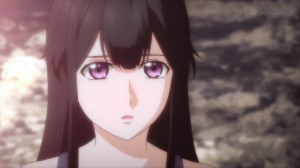 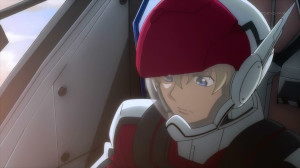 In the end we’ve pretty much set up what Hina needs in order to go back in time. She knows Aoba’s story that “she” saved him after he was attacked by someone and was brought to the future. Her feelings certainly are being shifted and with a bit of time she might be willing to continue this time loop. All Hina really needs now is that mech we saw in the first episode and a divide with her allies. The way she fought against Bizon (I think that was him) in the first episode seemed to reflect that she had no qualms about fighting him. Considering they are childhood friends that must mean something serious will go down fairly soon. With the pacing the build up to the conclusion must be happening soon. I honestly hope they pull a second season out of this since it will just feel too rushed otherwise.
Score: A+