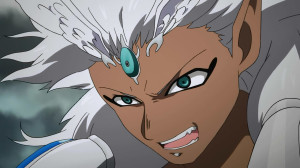 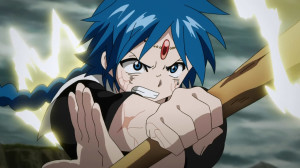 I will say the early part of this episode was exactly what I expected it to be. Mu does a pretty good job of being unstoppable until Alibaba steps in and helps bring a close to the hostilities between Leam and Magnorstadt. Not that it wasn’t a fun episode regardless. It was just nice to see Alibaba finally get to step up and make an impact. I’m still dealing with Morgiana withdrawals, but at least we got another part of the main trio back in action.

I suppose there really wasn’t much else that Leam could have done at that moment. Mu’s djinn equip was pretty much the trump card and even that wasn’t able to end things. Not that it wasn’t capable of since without Alibaba’s intervention Aladdin and Magnorstadt itself would have been annihilated. Fanalis just don’t have a lot of magoi to work with, but even still for a short period of time they can accomplish a lot. I suppose that’s the price they pay for being physically the most powerful people out there. 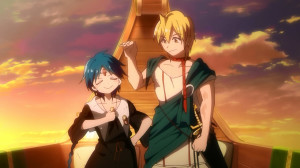 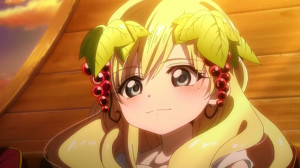 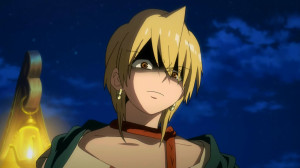 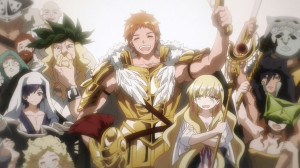 It was nice to have Alibaba and Aladdin back together. Good friends that hadn’t seen each other in a long time. The fact that Alibaba was able to stand up to someone like Mu just shows his growth. Seems like his ability to use Amon’s sword has only gotten better thanks to the magoi inside of him getting straightened out. While I’m sure there are plenty of characters who still outclass him (the series as a whole isn’t nearly done yet), he is still clearly a lot more powerful than he used to be. I can’t wait to see what his Djinn Equip can do (though we have a good idea what it looks like thanks to OP spoilers).

I think Aladdin did need someone to scold him. He’s been carrying so much on his back and not telling a soul about it. Even before they went on their own journeys he didn’t say anything. Might sound a bit hypocritical for Alibaba to rip into someone for the kinds of mistakes he made, but sometimes it’s necessary to throw someone’s words at them as a reminder. They are friends and if he was that worried about all this he should have opened up. It’s not just that Aladdin is a unique being, but he made himself isolated by thinking he was so different.

The comedic banter was a nice thing to have back. While Titus and company are entertaining, they really can’t replace Alibaba. Created a nice chance for Scherazade to remember the good times from her own past. Can certainly see the resemblance between Alibaba and the one she followed before. Seems like they had some good times and some tough ones. I can see why she stuck by Leam and has looked after it to this point. I just liked seeing Scherazade show a more cheerful side and not just being so weighed down by her situation and position. 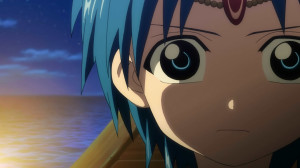 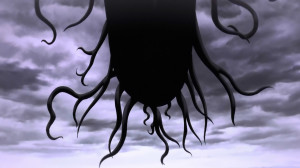 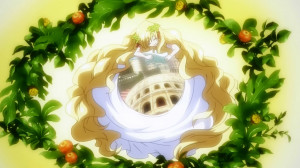 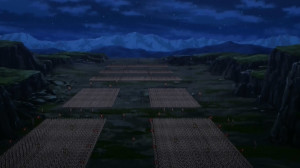 That was quite the bombshell dropped on Titus though. It wasn’t as if Scherazade was recalling him just because, but rather they really are out of time. Her body is also just a clone that’s been used to bypass her limitations. It allowed Scherazade to really extend her life by leaving her original body to rest and not be burdened more than necessary. Sad that she and Titus shared the same kind of situation but things got so unstable. She lost sight of what Titus was going through and was too obsessed with just the Leam Empire. Still, unlike with Hakuryuu it seems like this mother/son conflict got worked out without anyone having to kill the other.

Though that was hardly the only shocking development. Aladdin really did drop the bomb on everyone with the information he had. Even a magi like Scherazade didn’t have the full picture that Aladdin gained thanks to Solomon’s Wisdom. Suppose that makes sense since he is an existence that breaks the norm. I also assumed that magi were pretty much immortal, but apparently that’s not quite the case. Scherazade has lived for over 200 years, but she’s reaching her limit. Suppose it makes sense that no matter how much they are loved by the ruhk true immortality is out of reach. Makes me wonder as well what happens when a magi dies. Does a new one just pop into existence somewhere?

And of course the big dilemma at the end is that the Kou Empire is on the move. Of course they weren’t going to sit around and let Leam have Magnorstadt. Even if Leam pulls back they will still make their move. The power and resources they can gain from Magnorstadt is worth the risk especially since they have been weakened by the previous battle. Almost 200 magicians dead in the first battle and of course there is a limit to how many magicians Magnorstadt actually has. Things could turn out even worse though since it seems that Kou is going to trigger the worst case scenario by putting the Director into a corner. Things are going to get rough. 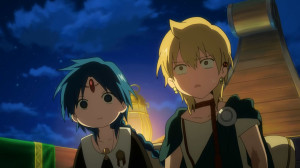 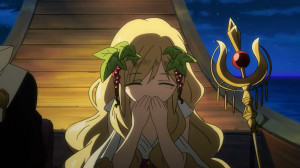 As a whole I enjoyed the episode. It did slow down for chatting in the second half, but it was still enjoyable. I liked seeing Alibaba finally return to the forefront and it’s about time he did. Feels like we’re ramping up nicely towards the finale here. I just hope we can see Morgiana again before this second season is over.
Score: A