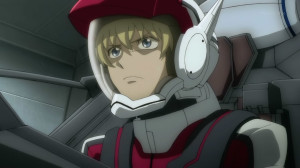 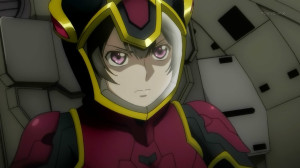 It’s kind of funny that the end of this episode and what’s coming next has my attention more than the episode itself. Not that the battle wasn’t good and not that I didn’t find the coupling situation interesting. It’s just that we’ve pretty much been waiting for this meeting for several episodes and now it’s finally here. Sure it required a Gundam-like move of stranding these two on an island.

I’d complain about the cliche aspect of it, but really there are so many ways they can do this. They really had the option either to have Aoba captured by Zogilia and create chances for Hina to interrogate him or trap them in a remote location that would force them to interact. They’ve only got so many episodes here and kind of need to speed on the whole getting Hina to betray her people thing going. Not that I expect her to fully change in one episode, but we’ll need to start turning her obsessive anger into a more positive emotion XD. 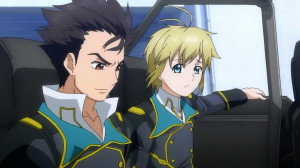 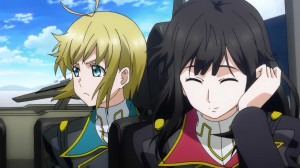 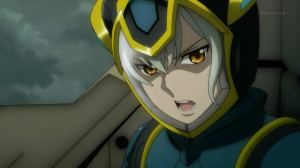 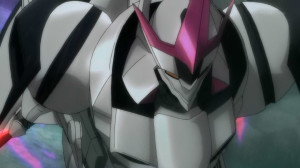 Honestly I don’t mind how they’ve handled Hina to this point. It’s been interesting watching her go from the good soldier to someone really obsessed. I feel bad for her since her older self’s advice has caused her a whole lot of trouble. At the same time can at least assume things will work out ok in the end.

As a whole the progression has been good. We’ve seen her friendships on the squad and we’ve seen how she’s slowly started to cross the line. Even the previous fight she could bring herself to stop giving chase within reason. But this time she chased Aoba right to his ship in order to bring him down. In a position that put her dangerously close to being shot down. Honestly even if she did defeat Aoba she wasn’t likely to get away in one piece. It’s certainly crossed into obsession and I’m certainly curious how Aoba is going to pull off turning that obsession around. 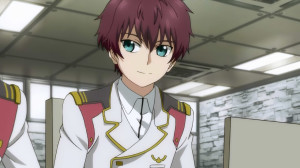 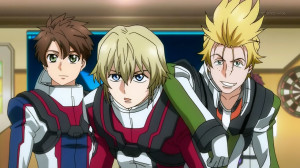 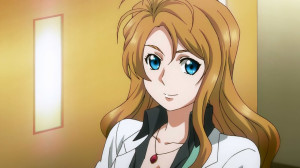 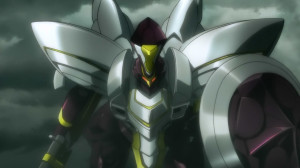 The rest of the episode was good. It was interesting to find out the effect that coupling with Aoba has had and why he’s so compatible. What is curious of course is why his brain waves are the general pattern. It’s hard to imagine that’s simply coincidence. Which of course ties into a good string of time travel theories. Perhaps Aoba was tied to the original development of the Coupling system. It would explain his connection and certainly why people might go after him in the past originally and trigger a time loop. Either that or it’s just really weird coincidence.

It did leave them with an interesting question. Either stick with the coupling and lose the ability to match with anyone else or stop right there. The benefit of course is massive. Aoba’s coupling just leads to a powerful boost and that’s certainly worth it. Better than half-assed coupling. And really when you have a good friend and are going to be fighting all the time isn’t it better to stick with one pair? Honestly it didn’t seem like such a bad tradeoff to me. I mean if they work well together is there a need to have other options? I mean maybe, but it’s a good short term solution and not like Aoba has a way back home right now.

The fight was fun as usual. The music really does work well and it was a nice showing of teamwork with Aoba and Dio taking care of things. While their combo move did win them the day it did take a pretty serious toll on them. That move already limits their limited coupling ability and does make them vulnerable. And while they did win it showed that good tactics can limit the effectiveness of those two so they aren’t completely overpowered which is a nice limitation. 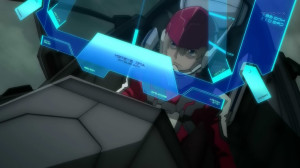 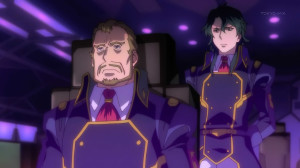 Of course I’m looking forward to seeing those two on whatever island they end up on. It’s about time we got some Aoba and Hina development and this is going to be a major step forward. I don’t expect Hina is going to switch sides overnight, but she does need some positive impression of Aoba. Something that will mix up with her Zogilia training and her views on the war. Hopefully they can do all this without her shooting him and prematurely ending the series XD.
Score: A-