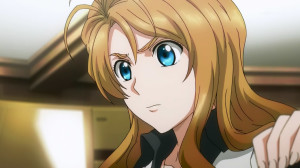 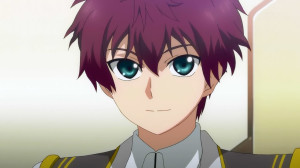 As a whole this wasn’t a bad episode to introduce a new character, some new antagonists and develop Dio a little bit. Although the pacing of the episode leaves me with the feeling that this series has more episodes than it actually does. You’d think they’d have enough on their plate with the whole time travel, Aoba/Hina, and the war in general. Not sure how necessary an episode focusing on the need for political propaganda for the coupling system actually is. If they told me this was going to get a second season relatively soon I’d buy it.

There was some good stuff in this episode though. Does show that Aoba is pretty capable of matching with a variety of people although it also hints that his connection with Dio is the best for both of them. While the opposition in this episode was strong I don’t think they were so powerful that the difference would be this big. It was almost like the coupling system wasn’t even being used. Fromm might be a skilled guy in general, but Dio’s combat skills are obviously top tier. And with the whole potential sharing thing he can get more out of Aoba than Fromm can. Heck Dio pretty much outclassed both of them while they were coupled while piloting a grunt unit, enough said. 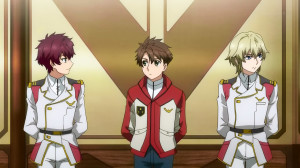 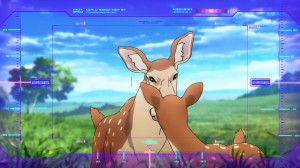 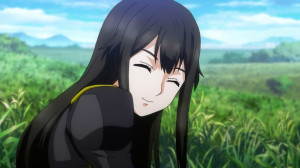 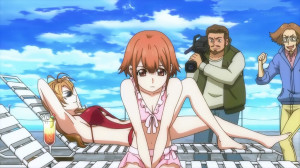 I did like the focus on Hina and her comrades. We really don’t see that much of what is going on with Zogilia so this is a good chance. Honestly since we need to care about this Hina turning into the one we know this kind of scene is necessary. It shows she’s not just a super serious soldier who is a bit obsessed and confused when it comes to Aoba. Is a pretty cute girl when she can relax. Although can’t say I’ve ever participated in deer watching, it was a cute enough scene. Does show that the team is pretty close and do care about each other. All this just makes Hina’s future switch to caring so much about Aoba all the more interesting. I really do want to see how that happens. And of course see Bizon snap as a result XD.

The episode was full of light moments. The whole tour of the ship was pretty silly with stupid questions getting less than funny responses. The Fromm character was solid enough. Hard to trust someone that overly friendly of course. While Aoba is nosy at least he doesn’t feel like he’s up to no good. A bit of sucking up might be necessary at times, but that guy does seem to take it to another level. Really it was just a basic PR stunt. Interviews, aerial maneuvers, girls in swimsuits, etc. 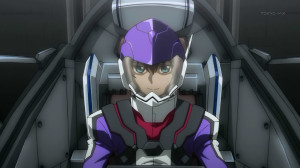 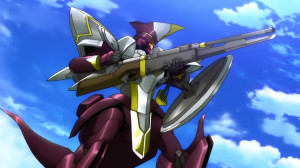 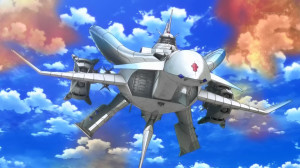 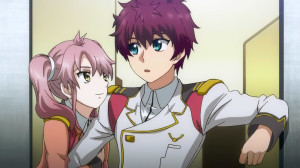 It was somewhat interesting to see that Dio’s patterns have changed since he’s been fighting with Aoba. Honestly I just feel like it means he’s been growing and changing. Could mean something is up with Fromm, but who knows really. Any change that Dio has gone through is a good thing, he needs to come out from that shell more and stop being chained down so severely by his past and his father. With the system they are employing honestly being a standard soldier might not be the best solution.

We did get to see a new elite group they’ll have to deal with. A decent effort to limit the effectiveness of the coupling system with the aerial mines. Does show the need for tactical help since Aoba didn’t realize he was being lured. Hopefully they don’t mess with the coupling system going forward and Aoba and Dio are back to taking care of that. The enemies are too dangerous to risk fooling around with other possible pairs. It seems like the battles will only get more intense as well with some new machine being delivered to Gallant’s team. Whether it can match up to the coupling system we’ll have to wait and see.

The episode also highlighted the differences between the factions. Honestly Zogilia seems like a more intelligent group. They reward their best troops with new units and have decent strategies. The Alliance whines about hidden research when it’s the only thing that might save them. “Wow you’ve invented the best weapon ever….how dare you!” The alliance just seems to be the standard stupid organization. Will probably be saved even while they struggle kicking and screaming. 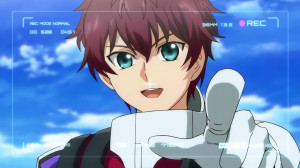 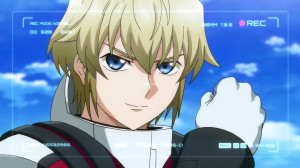 Here’s hoping we actually get some Aoba and Hina focus soon. I mean we’re around the half way point here. It’s going to be hard to route for a pair that we haven’t really seen interact since the first episode. Will have to see where the story goes while I still cross my fingers that we can get a second season for this.
Score: B+