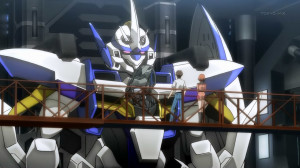 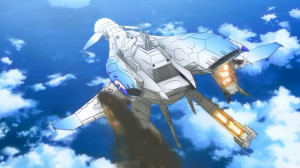 Certainly nothing like getting shot to get a future romance started…For a seires that is its own thing it sure is pretty Gundam-like in a lot of ways. It was a good episode overall though. Not much time for Aoba to get used to being in the future before another attack got launched. I’m not really surprised to see him do something stupid like he did since being from the past he has even fewer ties to this war than the average civilian would. Not that it makes it a good thing since that coupling system isn’t something you want to recklessly turn off. Needs to use his head a little bit.

In the end though they did repel another attack though they took some damage along the way. The only thing they can say is that it might make the other side a bit more uneasy about attacking them so soon. Not that they will stop since they’ve got orders from higher up to capture those unique units. 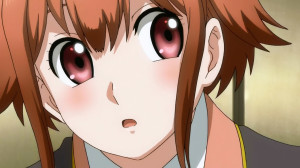 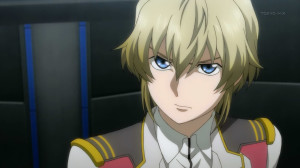 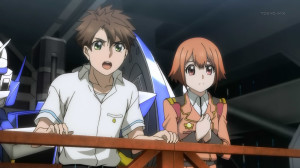 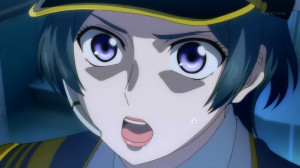 I do feel for Mayuka having Aoba fall asleep on her, but considering everything that happened him being exhausted isn’t a surprise. Getting attacked in the past, and then flung to the future where he was in another fight, and realizing he’s stuck in the future….that will probably take a lot out of you. Will say that it is nice that she along with other crew members are being given some focus so that they can stand out from the background. Can at least get an idea of Mayuka’s character. And hey at least Aoba did stand up for her when Dio was getting on her case a little. He should probably assume that she has permission rather than assuming she doesn’t know the rules.

I’m sure in the end Aoba and Dio are going to turn into great friends, but damn it’s going to be a process. There is certainly mistrust there and this episode probably isn’t going to help to build that trust up at all. Still long as they are a solid match they are bound to keep going out there to fight together so somehow they’ll have to come to an understanding.

Probably doesn’t help either that no one really believes that Aoba came from the past. Of course time travel is pretty out there no matter the setting so I can’t really blame them too much. Though you figure if they are going to trust him enough to pilot an expensive and experimental machine they could try to believe him a little bit. It’s pretty out there, but it’s not like they have any reason why he’d make up that kind of story. Sadly it’s just another thing involving trust and that won’t be hard to create. 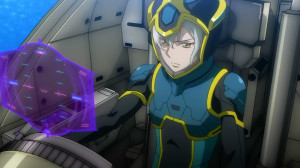 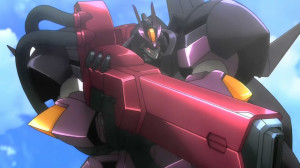 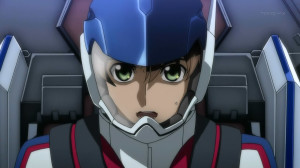 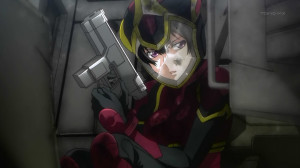 The action itself was good. I thought there were solid tactics from the other side that worked pretty well as a whole. Just in this case the coupling effect really was more than what they could handle. While it seems to be an insanely powerful ability, it does certainly have its limits. Does need both pilots, has a time limit attached to it, and they have to be in proximity to start it. Not the most stringent limitations, but the ability could have fewer limits as well. Some good battles here and there before and after Aoba got out there and they could really abuse the coupling system.

Of course Hina being on the other side had plenty of implications and impact on the battle. She actually did really well and certainly not worse than others that had gone up against the system. Was putting plenty of pressure on Dio along with her comrades and went up against Aoba who could make use of the coupling system. She did end up losing in the end, but does get to live to fight another day. At least she isn’t any worse than the rest of the pilots on her team really.

The major impact though was the fact that Aoba realized Hina is on the other side there. I suppose in a crisis like that he didn’t have time to really think about what it all meant. Didn’t realize that this Hina is a version of Hina that hadn’t met him yet. This of course is where everything will begin for Hina. The mysterious Alliance pilot that appeared to know who she was and did reach out to her. Of course I can’t blame her reaction at the time. She is a solider and Aoba’s side is the enemy, shooting at him was kind of a given all things considered. She’ll probably have time to think about what happened and slowly start being affected by Aoba, but it wasn’t going to be an immediate thing. 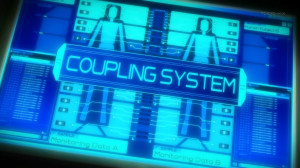 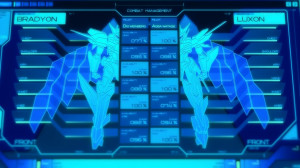 Overall I’d say that was a good third episode for the series. They still haven’t had much time for Aoba to accept his situation much less think about a desire to go home. Sadly it’s going to be a pretty rough episode for him since he got his side into a lot of trouble by acting on his own. One guy got his unit damaged and Dio took some mental strain by the coupling getting cut all of a sudden. Hopefully things work out, but it’s probably going to be an uncomfortable episode as a whole next week.
Score: A