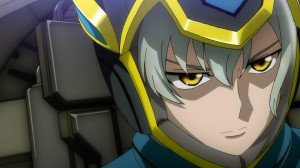 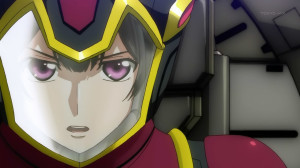 Welcome to the future, where people in mechs try to kill you, you get thrown into a war, everyone you know is probably dead or really old and the girl who brought you here is now with the enemy….good times. But honestly talk about a pretty crazy first day in the future for Aoba. Can’t really blame him for being pretty overwhelmed as the episode came to a close. Nothing like going from the first day back in school to everything going crazy all at once. At least he survived it and can start to absorb his situation.

A pretty good episode for action and getting introduced to a lot of the characters Aoba is going to be interacting with going forward. The crazy and jealous guy from the first episode is back, but in a much more restrained state. Should be fun in a cruel way to see Bizon go from this rational leader of his team to a crazy guy who is obsessed with Aoba who I presume is going to get involved with Hina who will then turn her back on Bizon. 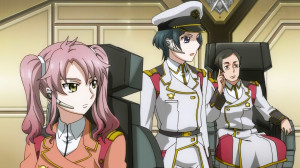 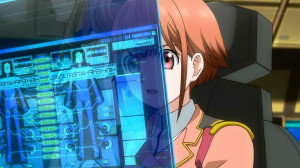 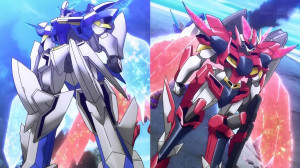 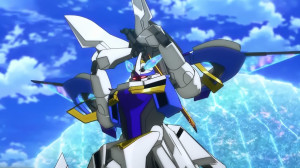 This show should get some laughs early if only for the terms they are using. Throwing around terms like “nice coupling” for unit matching, “first proposing” for when the linking actually begins, etc. Just some fun terms that certainly could give you a BL feel for the series if the first episode wasn’t so focused on making clear the main pair of the series will likely be Aoba and Hina. The terms certainly work for the series and what is happening so I don’t think it’s a big deal. By the second time I watched the episode I just took it as a given.

The system they are using for the series is pretty interesting though. Reminds me of the movie Pacific Rim that came out last year. A linking of the minds between two pilots that increase their abilities and improve their fighting potential. Seems to power up the units themselves, but that might just be unlocking their limits now that the pilots are capable of taking full advantage of them. Either way it’s not a bad idea and does encourage a team effort in fights instead of one mech being the main fighter and being the only one that matters out there. Though right now Aoba can’t do too much he could definitely become a force later in the series.

The action itself was pretty good. Aoba was able to make a decent first impression thanks in part to Dio’s piloting skills being shared but also Aoba being a pretty outstanding talent himself. Bit of main character power there, but at least he couldn’t just leap in there and instantly be over powered. Did need some help to even take down one of the grunts that came out there. I will say the music definitely did a nice job setting the mood and after coupling the mechs do look pretty damn awesome. Not a bad secret weapon they’ve got there. 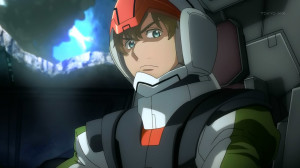 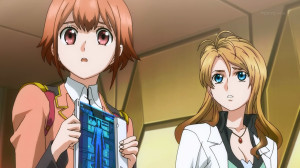 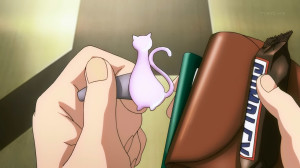 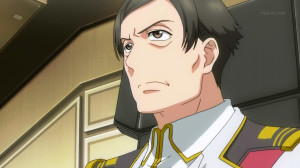 Unfortunately for Aoba after the fighting is over reality had to set in. First that he’s stuck in this future time and doesn’t know a soul. Hina might have meant in a sense Dio is waiting for him and they’ll make a great team, but she didn’t mean it literally. Can hardly blame Hina for not having all the answers of course since she is currently with the enemy and wouldn’t have known everything. Not surprisingly they don’t really believe Aoba’s story out of the gate. Time travel is a pretty random thing after all. Still, it’s not like they have many answers as to how he magically popped into a mech buried in rubble or know why he’d even be carrying stuff from that far in the past. Time travel isn’t much of a story so I don’t think anyone lying would really want to rely on that.

At least as a whole the people on that ship are decent people. The one pilot letting Aoba stay in his room in the meantime while things get sorted out and the one bridge girl not accusing Aoba either. Going to take some time to get Dio to warm up to Aoba, but that can’t really be helped. For Aoba there isn’t much to do but continue fighting. He doesn’t have anywhere to go and doesn’t know how to get back to his time. For now he should just stick it out with these people and hope everything will turn out alright. Lucky break for them since he’d probably have sided with anyone he ran into. Though technically these people are in the alliance that Japan is included in so he’d kind of be leaning towards them as it is.

Of course there is a world war going on as well. Give people time and generally they’ll find a good reason to start some wars. Hard to say why these two factions want to wipe each other out, but for now that’s just the situation they are in. The factions are pretty classic with countries like Russia being on the opposite side from Japan, North America, and parts of Europe. I suppose we’ll find out more about the war later on. For now just need to know there is one and that Hina is involved with the other faction. That’ll be some reunion next episode. 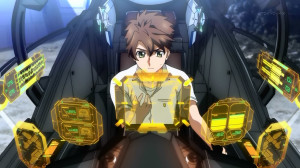 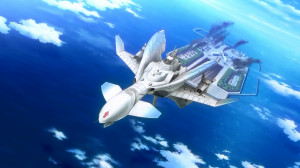 Not a bad second episode really. They had some decent action and moved the plot forward. For now it seems like we’ll be following the classic situation of a small elite team chasing down a ship and their experimental weapons. I’m getting a good feeling about the series as a whole though. It should turn out ok though the time travel aspect of the series might take a back seat until later in the series when the time loop stuff has a chance to be a serious issue.
Score: A-