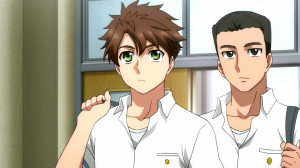 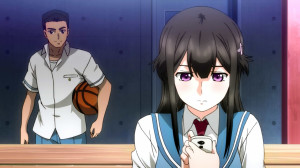 I probably should have been all over this series earlier. Certainly nothing like a good combination of time travel, awesome mechs, and some good action. For a first episode there was a good deal of stuff going on and they introduced us to a lot of things that will probably remain pretty important going forward. It’s definitely an episode that had me thinking about the series as a whole and where it will go. Nothing like a good time loop issue to get you thinking a little bit.

No offense to Aoba’s friends but they probably will be completely unimportant going forward. They were mostly there to explain Aoba’s character and point out Hina’s focus on him and how long that had been going on. Nothing wrong with a guy who ends up going to a school that he didn’t need to because he didn’t want to leave a friend alone. Certainly would have been tough to go to a new school mostly for the sake of rehab and not having anyone familiar around. Maybe a bit of a softy, but Aoba isn’t a bad guy at all. 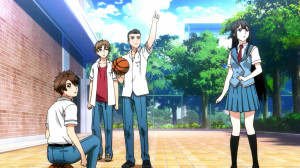 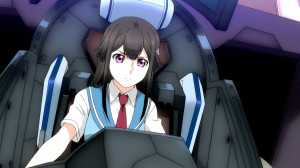 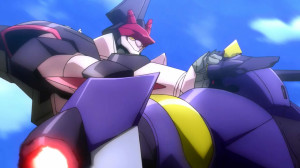 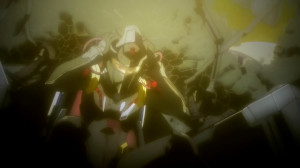 I’d say the only complaint about Aoba so far is that he might be a bit plain. Doesn’t overly stand out at this point, but at least he isn’t standing out for a bad reason. Despite freezing up momentarily he did react pretty quickly to a future mech trying to kill him and trying to at least keep his friends out of danger. Certainly helped as well that he quickly believed Hina and went in her mech instead of running around some more and causing more trouble. Though I suppose between the psycho trying to stomp him and his unusual, but cute classmate…the choice was pretty easy about what to do XD.

Also something nice was that Hina did actually get to kick some ass in the first episode. Wasn’t just the main character falling into a mech and suddenly saving himself. Hina was definitely the expert and got the chance to do what she could. The only reason she had as much trouble as she did was probably because of lack of practice (she’d been there months watching Aoba) and her mech seriously being in need of maintenance which she couldn’t easily get here. In general a complex machine like that is going to have issues without getting taken care of for months on end.

At least Hina had an excuse for her troubles unlike the lunatic that came there to kill Aoba. Can’t kill a human with a huge gun and even with melee weapons he wasn’t getting much done there. The best he could do was damage Hina’s suit and then try to blow them all up. On that note, this guy…kind of screams jealousy doesn’t he? Coming from the same time as Hina and most definitely knowing who she is. Considering the first thing he did after coming to the past was try to kill Aoba there is definitely something going on there that is probably going to be revealed going forward. Kind of fun that Hina didn’t even care really. She just was focused on saving Aoba from this nut. 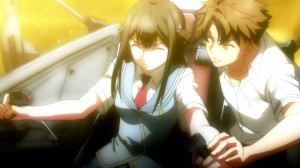 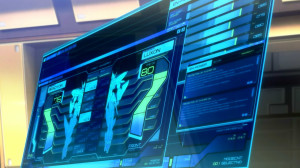 So far I’ll say the mech designs are ok. Nothing too strange. The OP mostly gave a good peek at what we’re getting for the main characters and no doubt those stand out pretty nicely. Hina’s suit was pretty solid and held up pretty well considering it was probably no where near at its best. And yeah, girl gets the pink mech but at least it wasn’t over the top or anything. Sunrise has definitely has series with pinker mechs than that one. At least it could still pass as a dangerous weapon.

I am curious though about the time loop going on here and how the series will play out. Whether or not it will be a repetition of the past and just continuing the loop or finding a way to have things work out long term. As it stands it appears Aoba met Hina in the future, they got close and eventually she was told about what happened in the past. That weird time distortion opened up and she flew in to protect Aoba and make sure he could make it to the future. Whether he wanted her to or not I’m not sure. But safe to bet that Aoba did some important things and his surviving and making it to the future was pretty essential.

I just wonder about what happened to Hina at the end. If she’s in the future somewhere it’d make sense she disappeared while Aoba went ahead. Whether she ‘died’ or whether she went back to the future time she came to the past from I’m not sure. Kind of what might define this as a bit of a tragic story or a happy ending. Would suck for Hina if she just kept looping through time without ever really getting a future to enjoy. 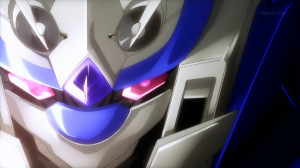 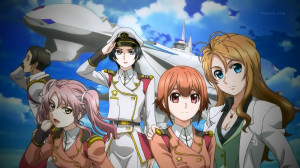 The first thing that came to mind while watching this OP was, wow it’s nice to see Gundam Seed again XD. You really can remember a few different OPs that the series had and see some similarities to this one. Not that it’s a bad thing since I didn’t hate Gundam Seed, just a funny thing to notice. The song itself is pretty solid. Has a good tempo and was good enough to keep me listening. It’s probably not a great OP, but it’s a good one. Will give it a few episodes and see whether it’s grown on me at all. Good way to start an episode though. Did a good job of showing off the vast majority of the cast, giving plenty of hints as to the Aoba/Hina relationship, and did it with good music. 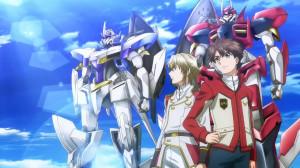 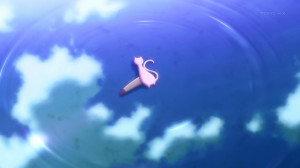 The ED is pretty solid as well. Definitely a slow ED, but it definitely works. A good way to wind down and just has a feeling to it that it very much suits the series. Focusing on some still images of characters while the screen pans back or moves to show off those characters. A lot of focus on Aoba, Dio, Hina, and the crazy guy from the first episode XD. Not surprising that things will probably get pretty complicated there as the series goes on. As a whole I think the song actually pulled me in more than the OP did. Just has a good sound to it and I’ll definitely keep listening to it as the series goes on. 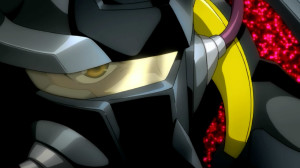 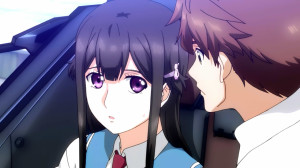 For a first episode this was pretty solid. Threw in some mysteries with the time travel and how things might unfold, but also delivered some good first action and introduced some of the lead characters. Pretty good first episode that tells you enough to make you want to keep watching if it’s your type of show.
Score: B+