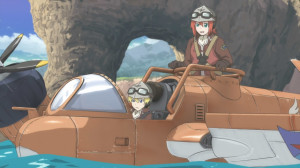 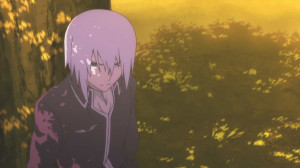 Its not often that I watch an episode of a series, somewhat intrigued but generally underwhelmed and end up wondering: “What did I just see here?”. Toaru Hikuushi e no Koiuta (The Pilot’s love story) wasn’t something that was on my radar, but the fact that this was an anime that involved planes and old school dog fights caught my eye.

First things first, I’ll openly admit that Toaru Hikuushi e no Koiuta is a pretty good looking show. The animation and visuals are definitely eye catching, and its got a sort of CG meets 2D animation vibe that reminds of Last Exile. The show is like Last Exile, except with a completely different color pallete, brighter richer hues, day light and tons of greens to Last Exile’s dull muted tones and night sky scenes.

Plot wise, there’s a decent amount to take in this episode. Carl La Hire (pronouned Kal-El, as in Superman Kal-El), is the main character of the story, and seems to be a cadet that’s going on some kind of mission to the unknown. See, he’s a fighter plane cadet, has a sister (who seems to be a foster sister) and erm… they’re riding off into the sky on some floating Island. Confusing yet? It gets better. 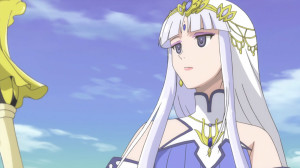 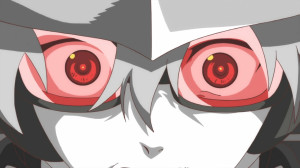 There’s hints that Carl lost his mother as a child, and was some form of royalty (and seems to hate the current Princess). He seems to have been taken in by Albus family, who’s third daughter is the red-headed sister in question. 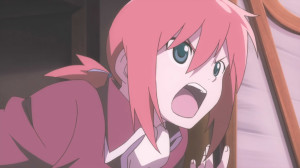 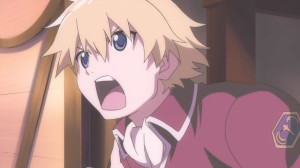 Things get weird though, as soon as Carl and Ariel (both partners on the same plane) leave with a bunch of other cadets on this big Island/Peice of Rock that’s chained to the ground (literally). Said floating Island starts floating away as soon as the chains are broken off from it by what I assume is the country’s airforce. The whole Island business seemed fairly ridiculous, very much a plot device for Carl and the rest of the cadets to have dorms and the good old high school/cadet life. 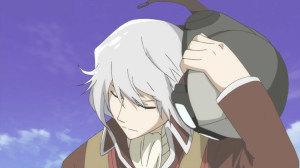 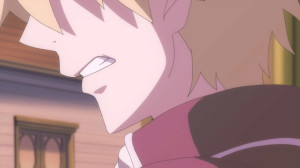 Its here That Kal-el Carl ends up finding his white haired rival. Some dude that looks extremely angrily at him, and prompts good old Carl to act with a random bit of Anger himself. Its kind of odd how bi-polar Carl seems to behave at times, going from extremely cheerful to suddenly blood thirsty angry.

Of course, what truly perplexes me is the introduction of another girl, Clare Kruz. She and main man Carl end up sharing a moment, and they seem immediately smitten with each other. Now I’m not one to argue against a little romance in my anime (or a lot) but this was all definitely kind of sudden. On top of that Carl goes back to be exceedingly happily hyper again shouting her name after he drops her off. Yeah… this guy’s mood swings are definitely not normal. 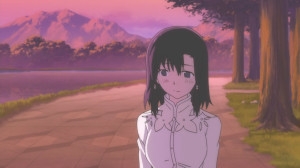 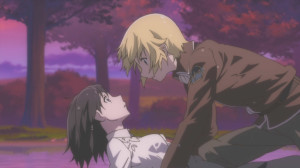 In general though, it seemed like the scene was a sort of excuse for the show to showoff its animation, and more so its pretty clouds. Unlike P.A Works with Nagi no Asakura’s underwater world, however, it didn’t add much to the experience for me.

And by the end of the episode I was more confused than anything. Who is Carl? Why is he and his sister off on a giant floating island with a bunch of airships and planes, and what’s the deal with the princess and Carl’s extreme blood thirsty hate for her. And why is he called Kal-el? I haven’t nary a clue. What I do is that I found this episode to be generally “okay”. Nothing too impressive, a few good beats every now and then, and a lot of just tried and true stuff that we’ve seen quite a bit in anime already.

Hopefully there’s more substance to this series than some clever CGI and Last Exile nostalgia.