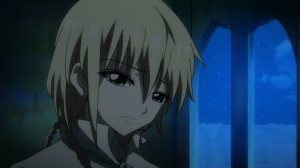 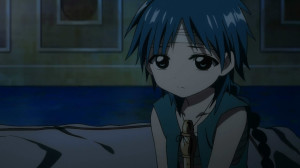 Well if we were looking for the dark side of Magnostadt this pretty well showed it. There were a lot of questions about what this country was really all about and we’ve finally peeled back some layers behind the awesome magic and the interesting learning experiences XD. There certainly had to be a downside and this whole class system was bound to have its bottom ranks.

I was surprised how quickly Titus approached Aladdin in order to talk with him. Though it did make sense in the end since Titus is pretty darn alone and the idea that someone like him existed was probably a relief. Sadly for him while they both have gems their conditions are very different. A magi and someone very likely created/raised by a magi. I suppose one thing to note is that Sinbad is at least getting the information out there that Aladdin is his magi. Not surprising with the pressure he’s put on Aladdin. Though also showing his political motives with his attempts to react a united front with Leam. Though his intention was probably to swallow up that power into his group. 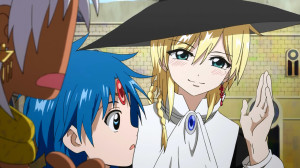 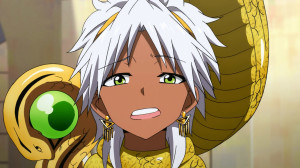 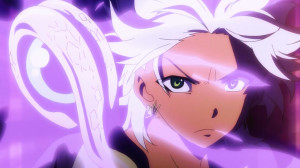 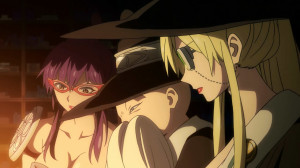 If the last episode was out to make Titus a jerk this one was to go completely in the other direction. Really showed how he’s an innocent being in the sense that he’s been denied a lot in order to achieve his mission. Seems to be a pretty pitiable individual for what he’s probably been through, though there are still a lot of questions in regards to what exactly this guy is. I’m not entirely sure either what his mission is supposed to be other than gathering intel on Magnostadt’s movements. I suppose finding out about their citizens is a good start though.

Did make for an interesting trio with Aladdin, Titus, and Sphintus going into that 5th Level Area. Worked pretty well since Sphintus showed that he does have his own skills. Using healing magic in an inventive way did take care of any problem they’d have in sneaking in. The guy may not be a powerhouse in a fight, but healing can certainly help both in the obvious ways, but also in the less obvious. A good group for comedy since all these guys have their weaknesses and times when they don’t think. 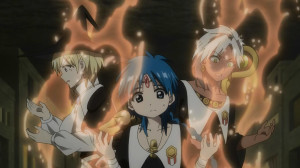 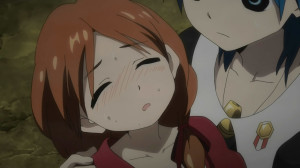 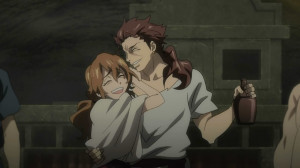 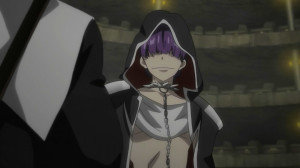 Of course the major event of this episode was when they got to that 5th Area. For all the splendor of the city above the shocking revelation is that 2/3s of the population is living in these slums. Of course if they were just slums it’d be bad enough, but this is even worse than that. These people are being used as human batteries for the people living in the city. It shouldn’t have been as surprising since we saw this sort of system being employed by those child pirates. Magical tools need some sort of source to work and in this case they are using normal people to get the result they need. Hundreds of thousands of people that’s enough to keep a city like that in good condition.

The whole system is just disgusting. These people kept controlled through fear, alcohol, drugs, etc. They have nothing to do with their time aside from these self-destructive things since they only exist as energy sources. No wonder they are worried about taking action. Their fate of being thrown away like garbage is a constant reminder along with the fact that they are up against people who can wipe them out with insane abilities. Being constantly weakened and drained of magoi probably doesn’t help much either.

Of course they focused the tragedy there on the little girl Marga. Certainly easy to sympathize with a small child with a heart condition. Couldn’t add up the tragedy with this kid more if they tried. She’s a good representative of the darkness of Magnostadt though. A small child that can’t read and won’t live long even if she managed to avoid collapsing around those inspectors. Not surprising that Aladdin would jump in when she was thrown over, but Titus was there too. Does make sense that he’d sympathize with a little girl like that though. Someone like him who hasn’t been allowed to see so many things because of where they were born. Curious to see how things turn out from here since it’s going to be hard to not have a major shift after this event. 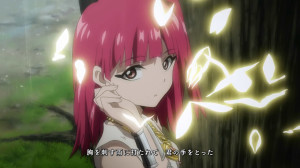 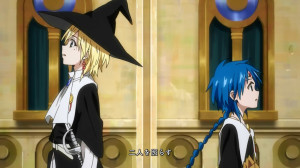 The new OP is definitely very Magi. It just seems to fit well. It did a good job focusing on the main characters and their particular situations. The song itself is pretty upbeat and enjoyable to listen to. It does make me wonder if any of these situations are actually possible or if they are just the kind of “what if” scenarios. I can’t imagine that Aladdin would willingly participate in a war to invade Leam. Still it was pretty entertaining showing a lot of things that may happen. I think it was a fun song and have no complaints about this one. Maybe not a favorite, but it’s good. 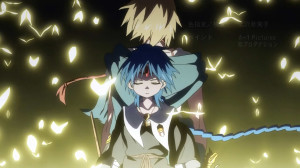 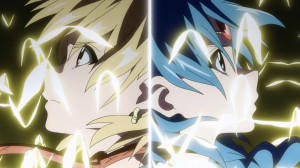 The new ED isn’t bad either. They certainly focus on the bro pair of Aladdin and Alibaba. Even Morgiana was mostly regulated with the rest of the cast while those two had the prime focus together. It was a pretty simple ED overall. Visually just showing off the huge cast they’ve pretty well assembled throughout the series, starting and ending with Alibaba+Aladdin. I suppose it’s not that surprising. This is a pretty prime partnership in the series and I’m sure when the long-term story is finished they’ll have made the biggest impact on the world itself. 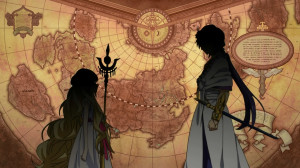 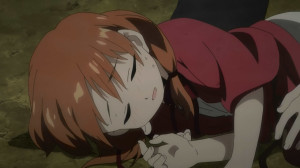 A pretty good episode as a whole. We dove into the darkness of Magnostadt and I’m sure more is coming soon. I am curious how things are going to go with the people stuck underneath the city like that. Aladdin may have wanted to stay and continue learning, but I’m not sure he can manage that while knowing the situation in this city. The painful divide between the goi (non-magicians) and the magicians is a pretty serious one. Instead of slavery we got frankly an equally ugly way of ruling over people.
Score: A