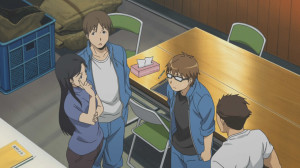 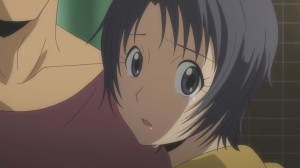 Thank God for Gin no Saji, the one show that is going to make the Winter 2014 season not a complete and utter bust (at least for me). I’m not normally one for sequelitis (the disease where sequels appear to be more interesting than anything new) but Gino no Saji is probably the only series premiere so far that has me excited for the next week.

In many ways the second cour of the series (Its hard not to look at it as one big chunk) is definitely heading to more interesting ground. Now that Hachiken’s culture shock and general aclimatization period is over, we’re starting to get some more slice of life elements in the rather unique Agricultural school setting of Maisozono.

The theme this week was definitely around being kept at a distance. Hachiken, for all the closeness that he’s had with both Komaba and Mikage, gets his first taste of “it doesn’t concern you”. As anyone who’s heard that from a friend can attest to, that’s one of the worst things to hear from close friends, let alone your crush.

Yet, Hachiken ends up getting excluded from whatever Mikage and Komuba are dealing with. The whole issue gets thrown out for laughs, but its definitely worth noting how much courage it takes for Hachiken to actually go and ask Mikage again about the whole issue only to get the “that doesn’t concern you” one liner thrown at him. Its funny, but none the less painful to see.

Its also kind of perplexing to see Hachiken being shut out, especially given how close he is to both parties involved. He spent an entire summer as almost part of the Mikage family, so its not exactly fair to him to be treated as a third party at this point.

My money is on it being something more to do with Komaba rather than Mikage. The whole shutting Hachiken out an dealing with things personally seems like more of a male bravado than antyhing.

On the flip side, its also possible that Mikage is being her usual closed off self. Behind that gentle smile and cheerful demeaner has always lurked a personal darkness that she rarely lets out, and something that took Hachiken a while to uncover last season.

On the romantic front, its worth noting that Hachiken, probably because of his naiveity is not worried about what this all means. There’s hints of it in the episode, probably some clever prodding and nudging on the whole childhood friend angle and potential between Komaba and Aki, but I’m guessing its more misdirection than anything.

What is undeniable is that, at the moment Komaba and Aki are a lot more comfortable sharing secrets with each other and opening up to each other. In many ways, Hachiken is still a bit of a stranger, even if he is a good friend of the two. And given how reserved Mikage is in general, it’ll be a while before Hachiken can close the distance he now clearly sees.

Whatever the case, it is still fairly refreshing and honest to see Gino no Saji deal with such topics. While the beginning of the episode focused more on a montage of the Mizono school life, and the latter half focused on the Mikage Komaba issue, there was a good deal of focus on what is at the heart of the series, Hachiken’s own character arc.

We got some good development on what Hachiken struggled with last cour with Bacon (the pig). The bacon he sent over to his family was received, and even his father was quite impressed by it. I’m sure Hachiken’s deal with his dad, and the issue of his breakdown will be explored in more detail as the season progresses, but for now it was nice to see a nod to the whole issue in the episode.

Hachiken also becomes the vice president of the Riding Club. It is interesting to note that Mikage, despite being overall better as both a rider and horse caretaker is not chosen, and the reason that the senpai gives Hachiken is that Mikage does indeed keep people at a bit of a distance. I can’t say I disagree in light of what we’ve seen, and Hachiken is pretty much the sort of guy I’d be comfortable talking to if I had any problems as well.

That said, the whole “Can’t say no” moniker that Hachiken seems to have received isn’t all a call for celebration. The thing about not being able to say no is that a lot more people end up trying to take advantage of you, and thats doubly dangerous when you’re in high school. Despite impending problems though, it seems to be played more for laughs than anything.

At the end of it all, I’d say its great to be back in Mizono, and I look forward to seeing where Hachiken goes from here, and as the ED seems to hint, it’ll be nice to see how his relationship with Mikage develops.

in Gino no Saji