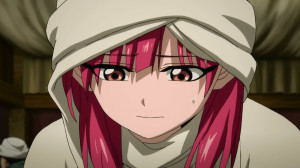 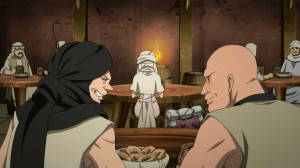 And now Morgiana has gotten the chance to have an episode focus entirely on her. Looks like she’ll at least be a two-parter like Alibaba was. Was nice to see her and was a chance to catch up with characters I didn’t think we’d see again. Alibaba’s step-brothers making their appearance and seeming to be doing alright all things considered. Well aside from having to eat bugs, but it is a culture thing. Kind of surprised Morgiana would have trouble with any kind of food considering the terrible food she probably got as a slave. But I suppose some things are just a weak point for anyone.

Her first stop was pretty much a gold rush town. Just that the gold in this case was Fanalis slaves. The town was probably bustling while they had all the Fanalis out there to enslave but completely dried up once there wasn’t anyone left. People moved out there for a variety of reasons since a lot of people living in an area will have normal needs. But the slavers left and now that place is slowly dying. Not that I feel too badly, there whole town was built on lives being ruined and they couldn’t see that it wasn’t a situation that was going to continue forever. Must have been a long time since that town was prospering if people were stupid enough to believe they could capture Morgiana XD. 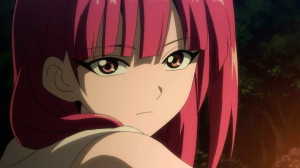 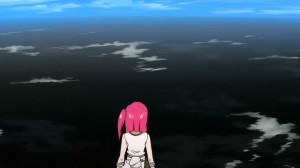 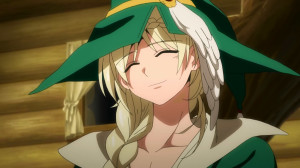 I didn’t expect the dilemma that Morgiana has to face to present itself. She can go and find her people, that is most definitely possible. The problem being is that going back isn’t nearly as easy. She’s ironically at the edge of a cliff and has to decide right here and now where she belongs. Not even an option to actually go and meet her people to get a feel for that option she has to make this blind guess. I feel bad for Morgiana since this is a hard decision to be faced with. Especially since she fully planned on going to meet up with Alibaba and Aladdin after she had a chance to settle things. She wouldn’t be able to see them again if she went and now hears that this war is billowing.

Of course this guy she ran into is by far a mysterious character. The OP pretty well gives a good hint as to what he is though. Still a pretty strange place to live. Down in the middle of darkness is just unsettling. Though perhaps he’s the cause for that strange darkness in the first place. Doesn’t appear to be a threat though how much of an ally he’ll be remains to be seen.

Maybe Morgiana can twist this guy’s arm to take her there and then take her back. Since right now Morgiana wouldn’t get what she came here for. She wouldn’t be dealing with the pull of her Fanalis roots. How can she be sure that her place isn’t with her people if she can’t even get to meet with them? Maybe thinking up to the last minute that she’d go and then realizing her place is with Alibaba might work but I’d rather her get that chance to find her people and talk with them. 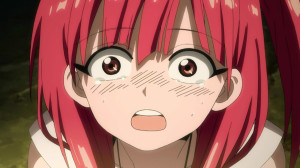 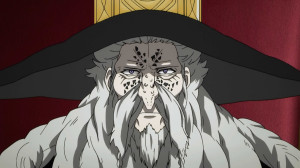 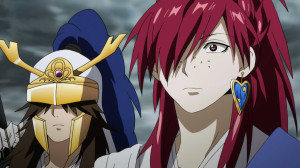 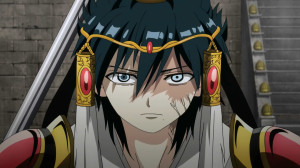 Either way Morgiana has one heck of a cool way to scale cliffs. May not have a huge magoi supply, but can certainly head down a cliff without much trouble. At least as long as her magoi holds up and her mentality remains solid. For some reason I just thought it was a pretty cool way to travel. Did show that despite Morgiana being a powerful character she does have her ghosts and things that she’ll need time to get over. You can’t live most of your life in slavery like she did and just shut all that out.

Of course world events are pretty darn important right now. It appears to be sixth months or so since the main group split up. No reasons given, but the Kou Empire’s Emperor has passed away. Kind of hard to have a reaction to that since we pretty much only saw him in a single flashback if that. But his death is definitely going to have major consequences on the world. Bound to be a grab for power within the Empire. Add in the bold proclamation that they will invade Magnorstadt soon and you’ve got a huge war primed to cause devastation.

Though maybe most unsettling was the meeting of Kou’s finest there. Hakurei looks fine which is nice. Cool that she turned those guys from the first series all into members of her household. Apparently Paimon really gets around XD. Does make her a serious military force. What was really creepy though was Hakuryu. Honestly the guy doesn’t look more emotionally stable than the last time we saw him. Just flying around on those parasite creatures and creeping everyone out. The dead look in his eyes just has me worried as to what he’s been up to and what he might do going forward. So sign of Kogyouku, but probably has suffered in political standing since we last saw her so hard to say how things have been going for her. 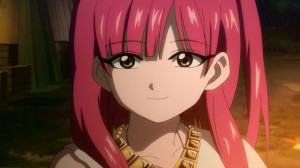 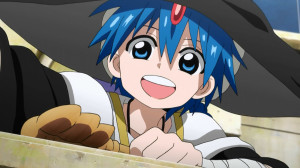 Overall a good episode, though I’m curious to see what Morgiana does going forward. There’s little doubt she’ll rejoin the others since she is a main character, but how she gets to that point will be interesting to see. As will how the world events are going to unfold. Our characters are still growing and likely to get caught up in the coming storm.
Score: A