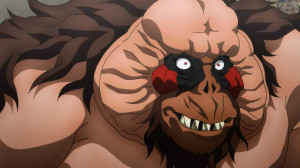 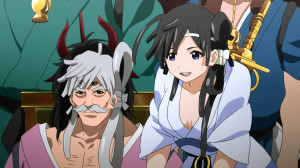 Talk about a brutal showdown. Not that this series has always shied away from things getting messy, but this was certainly one of the more brutal and bloody episodes we’ve seen in a while. Certainly goes ahead of the decapitation scene a few episodes ago since that was pretty well censored from actually seeing the act. Here we got up close and personal to Alibaba’s arm getting chewed into…ouch.

It was a good episode though both for the action and for Alibaba continuing to develop and grow as a character. He has a complex background with living on the streets, living in the palace, losing it all, meeting Aladdin, and getting trained in Sindria. It only makes sense that all that background should be reflected in his swordsmanship and tactics. Fighting a monster head on isn’t always the best way to go. You have to fight based on your own skills and abilities. Without Amon he couldn’t just fight Garda head on and really doing it that way nearly got him killed. As much as Alibaba said he was prepared, he wasn’t really prepared to fight to the death with his own life on the line. 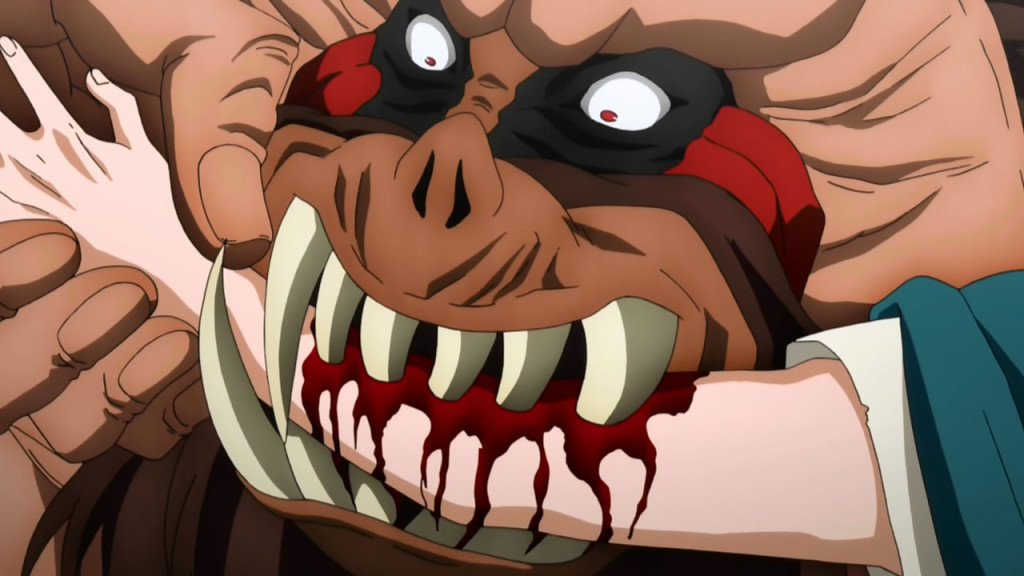 Ow! Words don’t cover how much that hurts

While I’d like to call that crowd evil, it’s not like Colosseum fights haven’t happened in history. Heck even today we have a light version of it with mixed martial arts. People love blood and gore. As much as we want to consider ourselves above what has happened in the past much of it still is something that appeals to the masses even today. We just can’t get away with it now. We’ve at least come far enough to say that’s something wrong. For those people it’s the norm and while change should come I won’t really brand them as evil monsters quite yet.

History aside, the battle itself was really good. Alibaba was put in a tough spot there and had to use his head to stay alive. Of course he tried to just fight straight on early and nearly lost because of it. Anything that’s been kept as a Colosseum monster and killed numerous gladiators deserves respect. Although I don’t blame him much for not expecting its muscles to be so strong that the sword actually got stuck in there! I mean damn, that’s some insane strength contained in that large body. 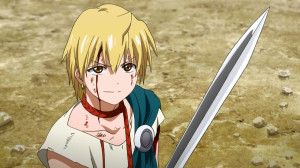 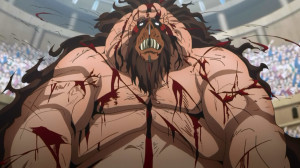 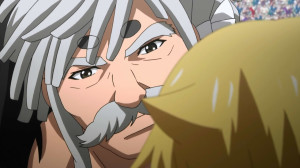 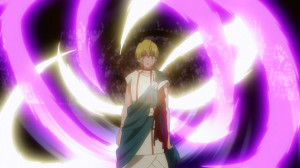 I can’t imagine this whole fight was for hte purpose of Alibaba accomplishing what he did, but rather to see what he was capable of and also to pay his way. In the end the results were worth it. He remembered how he had to survive to this point and that there are various ways to fight. Running, hiding, using your opponent’s strength against it, and even trickery is all valid. When it comes to fights it’s important to win and survive not just look back to say how cool you looked. In this case he didn’t look cool at times but he won. And props to Alibaba for figuring all that out.

The biggest thing of course was the fusion of magoi. They hinted pretty strongly that it was Cassim’s magoi so this wasn’t a shock. I think in the end Cassim wanted to leave his friend with something so he could accomplish his goals and really their goals. Now Alibaba has much stronger and greater quantity of magoi than ever before. More than enough now to fight well and be able to pull off a full djinn equip when the time is right. The key though is to continue learning and pick up some magoi manipulation along the way. He’s pretty much accomplished his main goal, but there is more he can do before they’ll meet up. 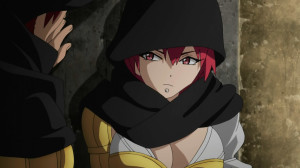 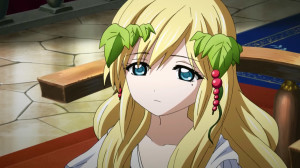 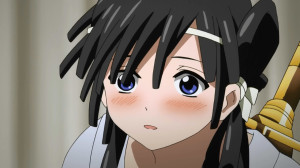 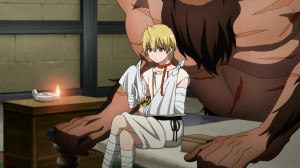 Of course no shock that Toto started to fall for Alibaba a bit. He is the lead character and did have his good moments. There’s always the cliche of falling for someone who’s shown the ability to be stronger than you and clearly Cassim’s influence has increased his cool factor. Though in the end Alibaba is Alibaba and that means being comic relief. Toto was the one though who did want to jump in to stop that fight so certainly a good person despite first impressions. And yeah, hilarious that Alibaba actually freed Garda considering what happened. I mean a great ally to be sure….but still I’d find it hard to put the whole chewed up arm thing behind me XD.

Was cool to get a look at this Fanalis corp. Certainly the kind of people you’d love to have on your side as elite troops. Gives more of the impression that they stay there because they want to and really what better place for Fanalis to be than in a place where they can fight as much as they care to? Well maybe their homeland would be ideal, but depending on how long you’ve been away from it the appeal might not be all that. We do get another hint though that things are going bad where Aladdin is and that war is just around the corner. Hopefully Aladdin learns all he needs to before things spiral out of control and he and the others are needed. 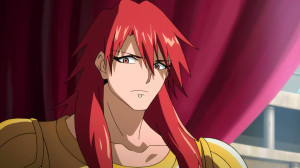 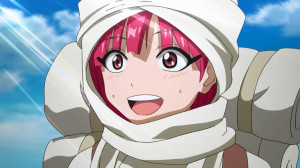 And of course Morgiana appears to have reached her homeland. I’m happy for her since obviously this is something that’s called to her for a long time. Whether or not it’s a wonderful experience it’s one she needed to have. Morgiana needed to see her homeland and get a feel for her roots. Hopefully there aren’t many that will try to capture her during this nice time. Probably will be, but I can hope. Looking forward to the next episode where we can see how her story begins to unfold. All in all a great episode this week.
Score: A+