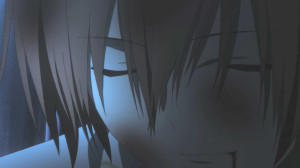 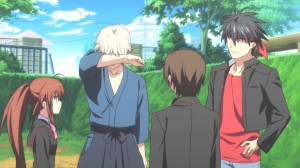 The kid gloves are off, as Little Busters! ~Refrain~ throws pretty much everything on the table, and with it, the big and harsh secrets that its been keeping close to its chest hit the audience, and hit them hard. For about 10 episodes I’ve been excitedly waiting for the big answers, and I won’t say I was disappointed but, Its hard to say these developments would make anyone happy. 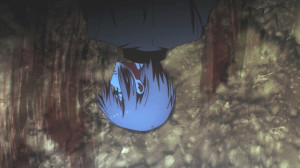 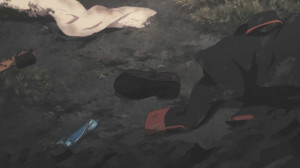 I had suspected for a while, as did most anime-only watchers that the big truth that Riki was heading to was quite a tragedy. I speculated last post that it might be the loss of a loved one, possibly Rin. Of course, the truth goes far far beyond that, into much more tragic and harsher territory.

“Everyone leaves”, a harsh reality that most people have to deal with at some point. Live paths diverge, people pass on, and circumstances just happen. In many ways, Riki has had the most trouble coming to grips with this reality the most, but the real truth in store for him is much harsher.

The truth is that everyone might be dead, everyone except Riki and Rin.

The entire cast of characters (save for Riki and Rin) that we’ve come to love in these two series… are all dead. That’s a pretty hard pill to swallow, and one that’s made even harder given how cheerful and fun the first series was. Yet, this big reality is the real curve ball that Little Busters! ~Refrain~ throws our way, making the big shift to tragedy much larger than probably anyone was expecting.

Now… While there’s a good deal of clout in the idea that Rin and more so Riki are the main characters of this story, I truly felt in this episode that this story is as Kyosuke’s story as it is theirs. This was the episode where we got to know everything from the words of the man himself, and the truth he revealed was painful to watch. 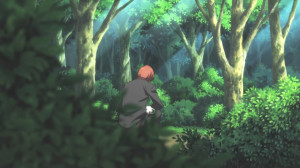 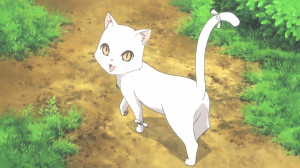 The little things came first. We found that it was actually Kyosuke who had created this world. It was Kyosuke’s plan to grow both Riki and Rin via the Little Busters baseball team. Added to that, Lenon, the cat that gave Riki and Rin their tasks, was also a clone or alter-ego of Kyosuke’s. Why he did all this? That’s what the episode spent the bulk of its time building up to, by looking back at everything that happened so far. 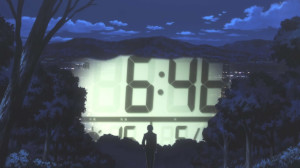 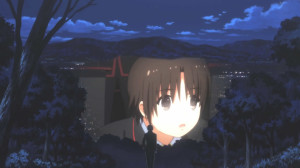 Its to Little Busters! ~Refrain~’s credit, as this is more or less a recap episode. It’s a recap episode, but it throws in so many small nuggets of information, and together with Kyosuke’s narration and the eventual answers he reveals, it makes for a very powerful episode. More so than some of the happiest episodes of Little Busters!, this episode truly drew the most emotion out of me.

Kyosuke’s story is truly a tragic one. He’s near death, and in his infinite regret and urge to protect those left behind, he created a magical second world and tried to get the two people he cared the most ready for the harsh realities that followed. Kyosuke was a stand up guy, a great person that inspired and lifted everyone of the people he knew. That in itself, is the biggest problem he has to contend with. So many people are dependent on him, that if he suddenly vanishes, they’d be crushed. 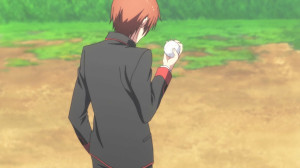 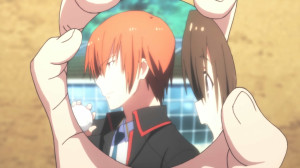 What would you do if you knew you were going to die and could do something to prepare those you cared about to be strong and endure it? Maaan! That’s quite the question to ask, and one that Little Busters! Refrain just throws at you, in this episode.

What made it perhaps more sad, darker and worse, were the new scenes we got to see, not only of Kyosuke’s reactions to all that happened, but the scenes at the end where he struggled to live just a little longer, just so he could help the people he loved. The blood trail lines, the dark grunge background, the gasoline, everything shows just how much despair and futility is in Kyosuke’s actual reality. 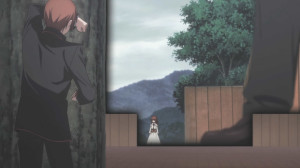 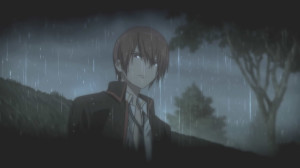 On top of having to accept that he will die, never really able to amount to something or pursue his dreams, he has to play the villain in his own world for the sake of his friends and loved ones. 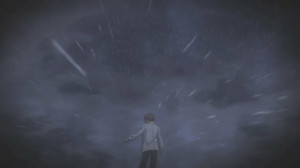 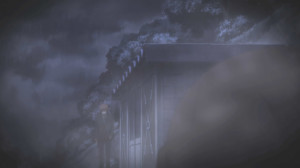 Perhaps the most surprising aspect of all this, was indeed that Kyosuke was not only the creator of this world, but also the one who turned back time each time. The Narcolepsy attacks weren’t a defense mechanism of Riki’s, they were more or less Riki falling to the intense despair, and then Kyosuke turning back time each time.

Its hard to even fathom how much strength of will Kyosuke has, as he went on to keep trying and got Rin and Riki to grow as much as they did. Things were going to plan, until the point where Kyosuke began losing his ability to maintain the world. 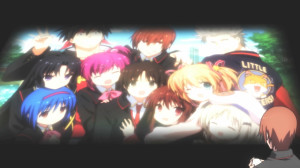 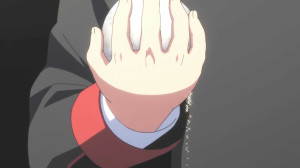 Its easy to see what this signifies, verily the fact that Kyosuke is pretty close to his end, and that hence, he couldn’t keep as many people in the world as before. He also began rushing things as a result, which led to what he perceived as his ultimate failure.

Trying to mature and manipulate people for their own good, can weigh on anyone’s conscience, and even Kyosuke began to doubt himself at that point. Perhaps the most painful part of it all was when Riki came to see Kyosuke the second time in his room. 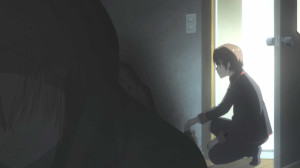 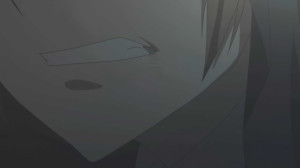 Kyosuke wanting to help his friend, to take over and make everything better, but realizing that he can’t, that he musn’t, was the most emotional and heartfelt part of the episode. In many ways, Riki had to lose his final crutch, his big brother that would always make things right. Yet, as with any parent who sees their child suffer through a tough time, it isn’t to just sit by and have them deal with it for their own good.

At the end of it all, Kyosuke’s final lapse in power is what perhaps is able to bring Riki closer to became the stronger person, the one who can take over for him and protect everyone. In the end, Kyosuke is able to final let it all end, and leave everything to Riki, all his friends, his sister and have him protect them for him… right? 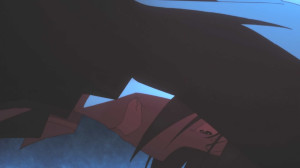 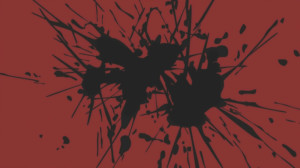 Of course, I wouldn’t lie and say that everything is all happy and great, and that despite whatever harsh realities lie in store for Riki, he’ll overcome them.

There’s the key question left to answer: “How did Kyosuke create a second world and do all of this?”. The answer to that question could change this whole story from a tragic story that resulted in something truly moving such as the young having to become strong to deal with the harsh realities that their adult protectors have been shielding them for, for as long as they can. 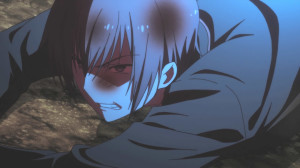 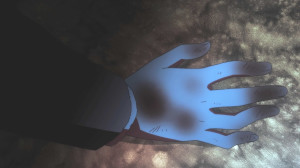 But since seeing all the morbid pain and the dark landscape that engulfed Kyosuke, another idea comes to mind too. What if this is all Kyosuke’s dream? His delusion, his imagined world where he can right all the wrongs and problems of those he’ll leave behind and those he lived with. Its obvious that the story of those kids dying in a bus crash was indeed Kyosuke, and those people who “shared his fate”.

There’s no evidence to suggest that all of this hasn’t just happened on in Kyosuke’s head, as he’s lost oxygen in that gas filled bus, and possibly even lost a good chunk of his lower torso. 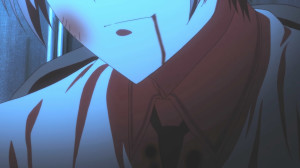 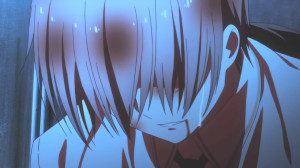 The words: “Even my useless life could then amount to something… mean something”, is pretty intense stuff. In many ways, this is a fantasy that Kyosuke needs to believe so he can pass on and die without regrets.

While I think that’s a very dark and twisted place that Little Busters! Refrain could go to, I doubt it will. Even for all the darkness and despair this series and particular this episode threw at us, its very much a show about a positive theme and message. The more probable ending we’re headed for is the ending of Riki and Rin having to face the harsh reality of knowing that they’ve pretty much lost all the friends they’ve become so close to, and are essentially alone. 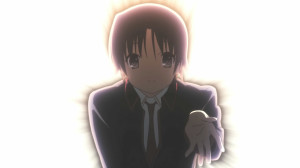 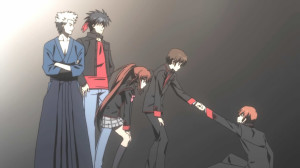 That ending, isn’t exactly much better, but the difference is that there’s a sliver of hope, that Riki and Rin can perhaps overcome this huge tragedy that’s about to fall on them, and live on. For Kyosuke, who’s gone to all the trouble to create this world and prepare them, his hopes and dreams lie with the fact that there is some hope despite how broken everything around him has become.

Where does the series go from here? What do we see in the remaining 2-3 episodes? What we see next, what direction the series goes on from here, will determine whether all this wait, and this big twist that we knew was coming, was worth it. The journey has been a long one, and now I await sadly as we do indeed near the end. 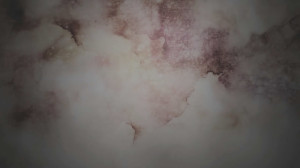 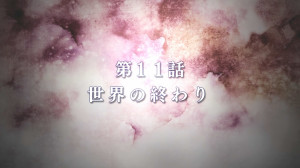 And the world ends, and we go on into reality from here. What awaits us? I’m very curious to see.