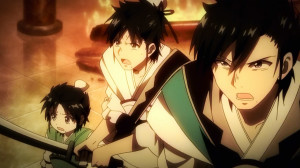 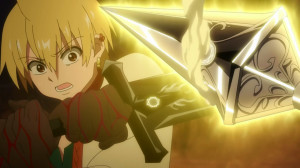 Damn…this series sure did a good job of dropping a bomb on people in more than one sense. I feel like anime in general over the past few weeks have been trying to run me over with these heavy scenes. This episode was all about Hakuryu and just how much danger he is in right now. He’s deeply and severely wrapped up in his revenge and it really makes him a frightening person to deal with.

I thought the opening scene would be the most difficult one for this group. Having to face an out of control Hakuryu. Of course luckily it doesn’t seem like he had perfect control over Zagan in that state. He was plenty dangerous, but don’t think there was quite the same amount of rationality behind his actions. He was fighting in a blind rage. What gave them the chance to win was the fact that he was pushing his body beyond its limits. That edge was enough to allow Alibaba to cut that weapon in half and end the threat. It probably could have gone the other way if Hakuryu was in his right mind, but who knows. 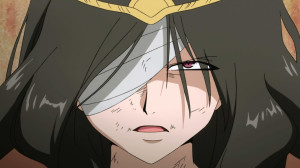 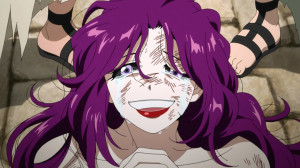 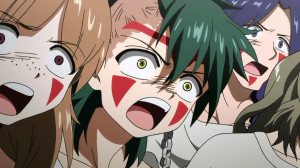 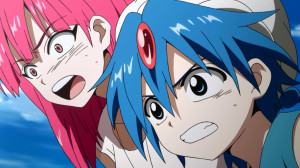 The episode was just full of “holy crap” moments. I actually did call Hakuryu going and killing Madaura. Seemed unlikely he was still being controlled and frankly I just had a bad feeling. Honestly he seemed like the type to do such a thing and he went ahead and did it. And what’s most unsettling is why he did it. He can throw logic around all he wants, but this seemed to be either a test run to see if he could kill his own mother or just revenge for being manipulated. Neither one being a very pleasing consideration.

This episode made clear just how obsessed with revenge Hakuryu is. He’s taking those final words from his brother too much to heart. He’ll burn down the Kou Empire and get who knows how many people killed just solely for his revenge. As much as his words had some logic to them he practically created an entire group that represented himself. If not for Alibaba I could have seen that pirate group spending their whole lives plotting on how to kill Hakuryu. Revenge is a terrifying spiral that is hard to end once you get started. Maybe some of the kids were starting to realize through the brainwashing what was going on, but some weren’t. He just walked up and slaughtered their parental figure for his own selfish reasons. Those kids did a lot of harm and they have to atone for that, but they were used and brainwashed as well. 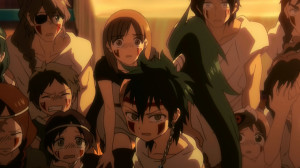 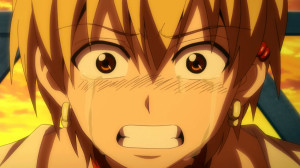 So props to Alibaba who showed his character in this episode. Yeah, right now he has to lean on Sinbad because he doesn’t have a power base of his own. But it was his words and emotions that saved those kids. He made the choice that saved them from prison and he made Orba and the others realize that they had to do better with their lives. He blew away the ark ruhk purely through his own passion and how much he cares. He knows these kids made mistakes, but they have their lives ahead of them and a chance to find their way. It’s fine to grieve, but they have to do something after that point.

It does leave a very unsettling farewell with Hakuryu when all is said and done. Alibaba knows that Hakuryu is going down the wrong path like Cassim. That little conflict after Orba tried to kill Hakuryu really showed the divide that was being formed. Alibaba and Aladdin are different from Sinbad and different from Hakuryu. They can’t walk down that path with him, though one can only hope there is a chance to bring Hakuryu back down the right back before its too late. 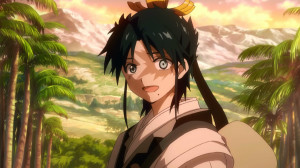 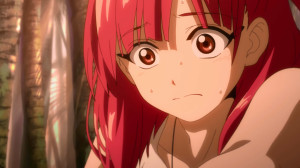 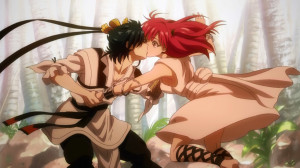 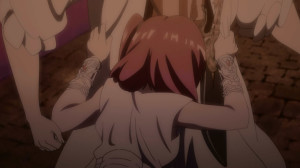 The last bombshell really was Hakuryu and Morgiana. Somewhat shocking for this kind of series to have that confession just get thrown out there. It was started off slowly, but it really was shocking more to Morgiana than anyone. I can’t understand that Hakuryu feels that way, but he did way too much too fast there. Morgiana is someone who’s grown up a slave and likely had a low opinion of herself. Having someone actually say all those things to her and confess their love had to be overwhelming. But as much for that reason she couldn’t hide her shock or the fact that she can’t return those feelings. How much she understands I don’t know, but the fact that she’s in love with Alibaba is clear as day. I think on some level Hakuryu understood that he did way too much there especially pulling her into that kiss.

The scene after just showed how utterly overwhelmed Morgiana was. All she could do at that moment was cling to Alibaba. Everything that happened was just too much emotionally for her to handle. While Alibaba talking to Hakuryu might have been for hte best (though I doubt he could talk him off that path right now) she couldn’t let him go. I just felt completely sorry for her there. That kind of thing she never expected, saw coming, or had any experience with. 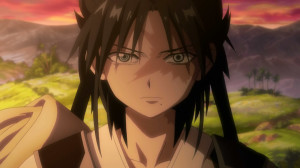 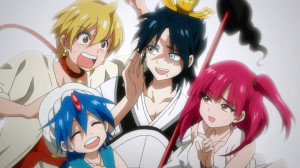 All of this and the farewell for the main trio is next week. Whew…this was a pretty crazy episode and makes you wonder if the farewell will be any easier. We see all these characters going their own way and wonder what kind of people they will be after their travels have been completed. I’m now looking forward to the different adventures each character will have since they should be pretty interesting.
Score: A+