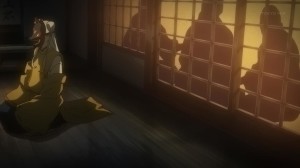 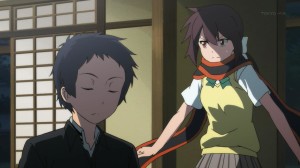 So we learned a little more backstory and…wait a second, the apocalypse is happening in under a year!? That’s a bit of a bomb to hold off informing anyone about Akina. I’m mostly surprised the mayor of this town wasn’t considered on the “need to know” list. Frankly I can understand Hime being upset since she was left in the dark here. Sure this is an issue that affects youkai more than anyone, but it still is something that will seriously affect everyone. I mean the town if not the world could be swarmed by youkai and the ones that are here might go berserk. You can’t say that’s not something that has effect on the humans.

Of course to be fair I can see why thye wouldn’t tell the populace in general. Can you imagine what the anti-youkai people might do when they find out what’s going on? We’d see this town tare itself apart. Or even force mass tunings to get rid of every single youkai in the town. Something that probably wouldn’t even help. I do wonder what the plan is though. They dropped these trees down into the world and now everything could go bad. Still it’s done a lot of good. All those people couldn’t peacefully live there if the trees weren’t there to allow for tuning in situations when it was absolutely necessary. 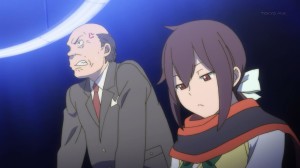 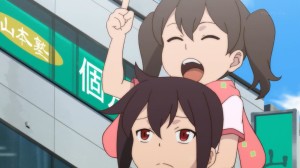 I do wonder what is going ot happen. They obviously can’t allow those trees to bloom and create a disaster. At the same time I wonder what can be done and what that would entail. I’m sure that Akina and the others are going to try to deal with this, but it’s a dangerous situation. They are a pretty talented group, but it seems like most of this is a natural occurrence. There is certainly some outside interference rushing the blooming, but unless they can turn back the clock it seems like a disaster that will happen regardless.

My sympathies for Hime. I mean sure she’s a self-proclaimed human (I have my doubts) but she’s still their friend and the mayor. The intention may have been to try and not add any more worries than she already has the damage was pretty serious when she found out. Especially hearing from the human guy that this was a “youkai issue only” couldn’t have been very convincing. It does appear she’s got a lot on her plate though. Her training is pretty intensive, has the actual job of being a mayor, is a student, and the constant comparisons to her grandmother and living up to that example. It’s just not something easy for anyone to take on and she’s working hard there. Makes me wonder how Hime is supposed to be human if her grandmother was tuned for some reason. I mean humans can be tuned I’m sure, but there had to be some reason and it’s probably connected to this whole dragon thing.

On a side note, when did 9 year olds start running for office? If being cute and likable is the only qualification I know some dogs who would be great mayors XD. I can’t really blame that one mayor for getting frustrated. You work hard for a long time and suddenly a kid of all people is trying to take your job? No matter how elite the huge plate of work on top of what that kid would have to do normally in school, that’s a lot of work. At the same time if in this world some kids are just that good, then well let’s let people have whatever they want. The girl is certainly a cute kid which probably helps her. 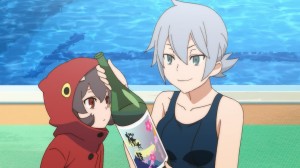 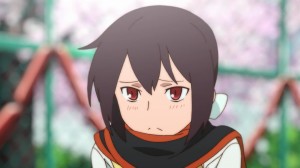 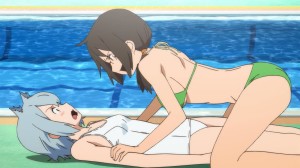 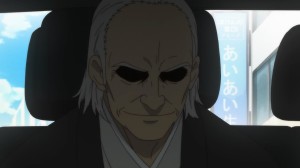 What’s a bit funny is that it seems like this other mayor is actually in league with some shady people. They going to assassinate a nine year old? I’m not sure this guy has a clue what he’s getting himself into. Probably realized that old guys don’t have the popular vote in this situation and turned to people that said they could help secure his victory. I just hope that nothing crazy bad happens. Though I’m sure it will work out fine.

In lighter news, swimsuit episode! This series doesn’t mind having fun with its fanservice at the right times. I like how the biggest moment really was Juri stripping from the nurse uniform with the swimsuit underneath XD. Then you have the half mermaid/half vampire girls with one of them actually growing older while in the water. The whole Kotoha licking Ao’s swimsuit so she had something memorized for Hime, etc. It was harmless stuff that wasn’t overly focused on at the same time. I say nothing wrong with some fanservice, long as it doesn’t overly distract. 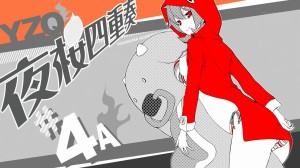 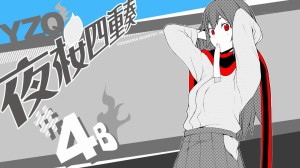 All in all a pretty solid episode. Things are building up to something big happening down the road, but also happening right now. Should be a good focus on Hime’s burdens, but also getting more information about what’s going to happen in the near future. Will have to see what craziness awaits us next week.
Score: A-