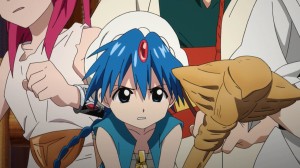 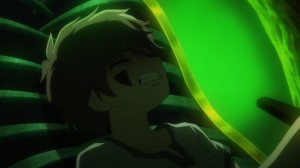 Makes you wonder how long the pirate situation is going to last here. While they certainly caught up with Aladdin and the Pirates pretty quickly it seems like this could take a while just because of the danger this Aum Madaura presents. There certainly seems to be brainwashing going on here and that woman seems highly likely to be connected to the dark djinn vessels. Though that seems a given with all the magic tools from Magnostadt.

In terms of a war strategy it’s not a bad way to work. They force this country to either focus on the troops on their borders or focus on the pirates. Either way they have to weaken their defenses somewhere. In this case they are getting to loot the country and steal resources away from them. Taking just the kids from the slums has the added benefit of pissing off the populace and creating a likelihood for civil war which is pretty much what Al-Thamen wants in the first place. Not to mention even if you didn’t use much brainwashing it’d probably be easier to recruit the slum kids in the first place. Give them money and food and that’s pretty strong temptation for kids who had nothing from the start. Also creates pretty determined believers who will support any sort of horrible thing. 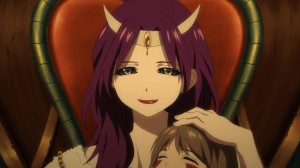 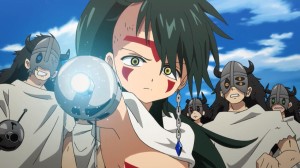 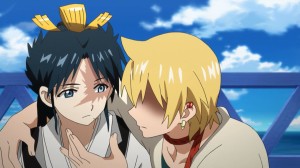 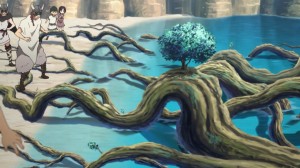 Orba being a good example of the worst result you could find. I don’t even know how much brainwashing was really involved. Enough at least to turn him into an absolute believer. Sees Aladdin being on that ship as some tragedy while he continually pushes those kids in the magical tool on the ships to push themselves to their limits and beyond. Throw in a powerful tool and he’ll be as dangerous as anyone.

The real problem is that most of these kids are victims. Kidnapped from their homes, brainwashed, and turned into almost a pirate cult. All willing to lay down their lives for Aum Madaura at any given moment. In order to stop this they have to bring this woman down, but these kids will literally die for her. The only option really seems to be beating the crap out of those kids and just trying to avoid killing them.

On the positive side Hakuryuu was pretty badass in this one. Zagan certainly has a pretty flexible power that can be used for quite a few purposes. Allowed him to beat down those pirates without much problem only stopped by a hostage situation. It pulled the group out of the ocean and took them to safety. Even managed to help them track down the pirates from a distance. Though not saying that Amon isn’t a good power for Alibaba to have. It’s got a lot more direct damage potential. Not to mention Alibaba still needs to get his magoi taken care of and probably learning how to control it like Hakuryuu can. Was a fun moment though between the guys as Alibaba touched upon the topic of whether Hakuryuu could do a full djinn equip already XD. 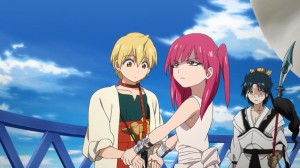 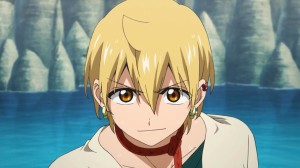 I’m looking forward to seeing the rescue attempt next episode. Seems like it will be a tough one that could backfire on them. Those kids could be brainwashed pretty quickly and it’s going to be a mentally grueling struggle to save the kids that are going to be fighting against them.
Score: A-