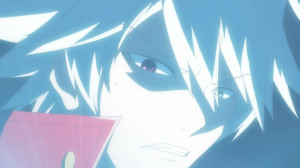 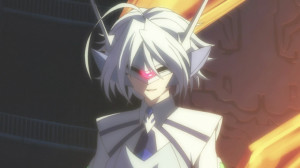 Okay… now even I am totally friggin confused. If you were one of those few who hoped that BlazBlue would begin to improve, or hell, make some lick of sense, then prepare to be disappointed.

BlazBlue alter memory is that weird guy in the room, you know, the guy who acts like a complete social misfit, doing weird things and not really getting that he’s making everyone around him uncomfortable. 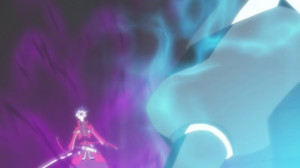 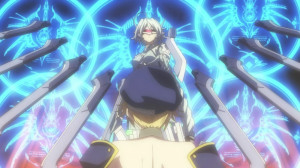 In a very similar fashion to the last episode, this one continues to quickly dish out plot details and ideas at a lighting fast pace, and expects the audience to not only keep up, but fill out all those missing dots. At this point I’m tempted to just suggest that if this even REMOTELY interests you, that you go and check out the games instead.

In terms of games, BlazBlue Alter memory has made it to the end of the BlazBlue Calamty Trigger (The first game), but… there’s also bits of the second game’s ending. In fact, quite a few things have been shifted around, making the first two episodes of Alter Memory a weird amalgamation of both Calamity Trigger and its sequel Continuum shift.

Yes, the story in the games is pretty confusing as well, but half the joy in a light novel is peacing together the real story through each different ending, and then getting a true path that connects all those threads together.

What Alter memory does in its second episode, is try and distill everything down to its bare essentials, and kind of mention in passing some events of the story that were hand picked from a bad ending or two. 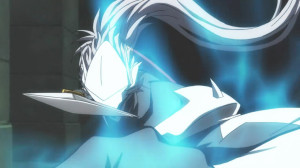 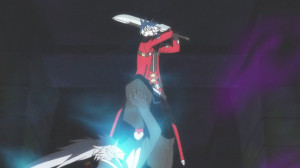 What’s sad is that it actually starts out decent. We get a decent fight between Hakumen and Ragna, and we get Nu and Noel meeting. And then the plot begins to take focus again, and everything begins to make little sense again. 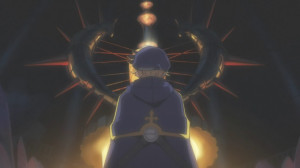 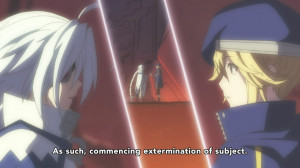 The basic gist is this (As of episode 2): Ragna has apparently been stuck in some kind of time loop, and ends up repeating the same viscious cycle over again. He ends up reaching Kagatsuchi, the 13th Hierarchical city and there he ends up going to that Town’s Library center, where he encounters Nu, an android robot that looks eerily similar to his sister. Added to that, apparently Ragna is destroying these Cauldrons in this Libraries because…. well just because?

The games kind of provide some back story as to why he does what he does (not until the second game) but this anime series just throws off backstory like its some bad baggage that it doesn’t need. 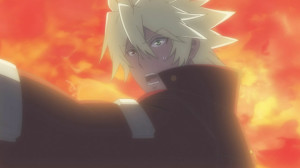 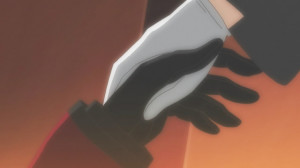 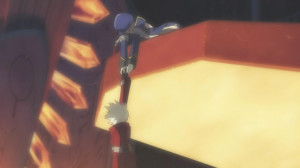 But I digress. Anyway, this time, for some reason, things are different. Almost everything goes the same, except for some key differences. Ragna and Nu both activate a “Complex dimensional Interference Circle” and then Noel (who happens to also uniquely stumble on the cauldron before Ragna this time) ends up saving him before he falls into the depths with Nu. 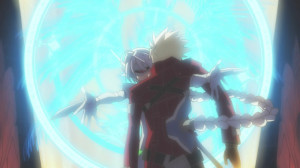 Also Noel and Nu apparently are both some kind of machine/android/robot/experiment thing, and have some relation, but that doesn’t really get much time for exaplanation. 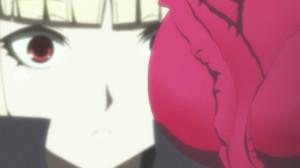 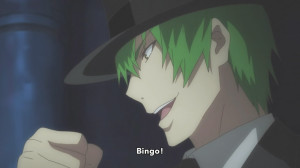 Anyway, Noel somehow ends up being the reason that things change, and because of that, apparently time starts moving again. Both Rachel and Hazama realize this (that’s goth loli vampire and green haired suit guy for those who are understandably lost). 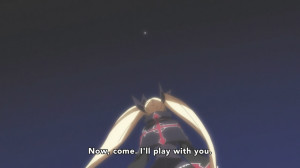 The episode actually ends with Rachel taking down some weird satellite (that houses a monster) in the space… And the episodes ends there.

Do not feel at all weird if you feel like you missed something, because there was literally no sense or order to this story. If you’ve played all three games (Calamity Trigger, Continuum Shift and Continuum Shift Extend) then you will barely be able to make some connections to what is happening.

See, I get where some of this went (if I look at how it happened in the games), but I have no idea what or where this story is actually going from here on out.

What completely baffles me is how much BlazBlue Alter Memory seems to be in a hurry to get somewhere, throwing out nearly 80% of its individual character stories, which actually help develop the main plot. There’s this mad dash to some unknown finish line… but the question is, what are they going to do when they get there?

Sure, we’ve technically made it to the third game’s point in about 2 episodes, but at this pace it will barely take one more episode before we get to where Continuum Shift Extend ends. Then what? Are they going to dial back the clock?

Its like the anime producers/writers were handed the game’s script, and they kind of skimmed threw it and put something together while being either extremely wasted or just out of their senses.

Honestly at this point I’m not sure who this series is for. Its not for newcomers, because they really won’t even remotely get what’s going on. Its not for fans, because the animation is bad, the fight scenes are okay at best (they got a bit better this episode) and the source material is not being adapted line for line anymore. 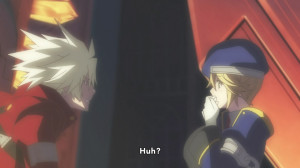 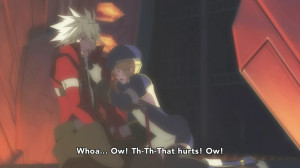 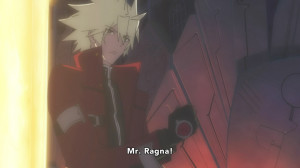 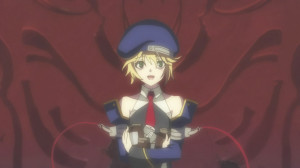 The one thing I actually liked about this episode though, was the Ragna x Noel moments. Even those couldn’t actually save this train wreck of a series at this point though. They just make the 24 minutes of rubbish I see on the screen, kind of bearable for me at the end XD

What makes this series a traversity is that it makes some of the best moments of the games look like stupid, sad and make them lack any emotional punch or excitement. The battle between Hakumen and Ragna, the moment we find out about what happens to Ragna, The whole thing with Noel and Nu, Hazama’s true nature, Rachel’s true identity, all of that, has kind of been half revealed, and spat on quite honestly…

I always thought that BlazBlue would be one of the series that was just begging to get an anime, and I wished for ages that we’d get a BlazBlue anime series. After this, I’m concerned that anime studios should never be allowed to touch game related properties… 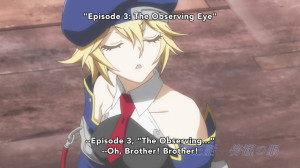 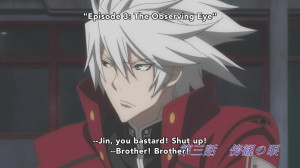 Why am I still blogging this series? Well… Maybe I’m still in denial? I still think this series will pull through? Or maybe I’m just curious, I want to see where this goes. Either way, the three episode rule at the very least for this series. It can’t really spoil me since I’m up to date as far as the games go. Also, I’m gtasping at straws but maybe there’s more Ragna x Noel moments? Those always smooth the tide a little bit XD